Running With The Horses 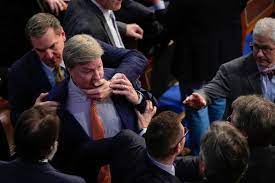 The chaos in the House of Representatives has both alarmed and amused me (in a weird way) over the last few weeks.  Perhaps the old cliche “the inmates are in charge of the asylum” fits rather well.  “One Flew Over The Cuckoo’s Nest” comes to mind. Perhaps it is the strange and unsettling unreality of it all - - childish adult human beings playing with fire when it comes to the stable functioning of government - - all in the service of the desire for power. Once again I entertain the question “Where are the adults in the room?”

Watching the machinations of the candidate for Speaker of the House has been nothing short of painful.  Fr. Richard Rohr drew my attention to Jeremiah 12:5 this morning.  While the new Speaker is no prophet and could not stand in the same room with Jeremiah, the words sound like a challenge to anyone who would become the leader of such an unruly and chaotic body as the House appears to be. 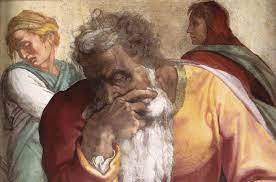 Rohr notes that Jeremiah was in a difficult situation “worn down by the opposition and absorbed in self-pity, he was about to capitulate to … a premature death…ready to abandon his unique calling in God and settle for being a Jerusalem statistic.”

Then the Voice of the Holy challenged him: “If you have raced with men on foot, and they have wearied you, how will you compete with horses? And if in a safe land you fall down, how will you do in the jungle of the Jordan?” (Jeremiah 12:5)   Jeremiah listened and heard and responded.

Regrettably, the new Speaker does not hear or listen to the challenge to live courageously in the face of  the manipulative chaos that surrounds him.

Fr. Rohr introduces me to Biochemist Erwin Chargaff [1905–2022] who updates the questions: “What do you want to achieve? Greater riches? Cheaper chicken? A happier life, a longer life? Is it power over your neighbors that you are after? Are you only running away from your death? Or are you seeking greater wisdom, deeper piety?” [1]

My hunch is that our politicians probably don’t keep company with Jeremiah or if they brush up against him they back away pretty quickly. The pursuit of power in politics is so often a running away from a certain kind of death. It does not appear to be a search for deeper wisdom and piety.

So it is left to us to listen and hear what happens in Jeremiah's relationship with The Holy.

Rev. Eugene Peterson imagines the conversation between God and prophet: 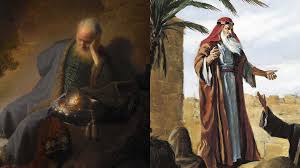 Life is difficult, Jeremiah. Are you going to quit at the first wave of opposition? .… Are you going to live cautiously or courageously? I called you to live at your best, to pursue righteousness, to sustain a drive toward excellence. It is easier, I know, to be neurotic. It is easier to be parasitic. It is easier to relax in the embracing arms of The Average. Easier, but not better. Easier, but not more significant. Easier, but not more fulfilling. I called you to a life of purpose far beyond what you think yourself capable of living and promised you adequate strength to fulfill your destiny. Now at the first sign of difficulty you are ready to quit. If you are fatigued by this run-of-the-mill crowd of apathetic mediocrities, what will you do when the real race starts, the race with the swift and determined horses of excellence? What is it you really want, Jeremiah, do you want to shuffle along with this crowd, or run with the horses?

I confess to a deep and weary fatigue with the “crowd of apathetic mediocrities.”  The choice to live quietly, perhaps cautiously, is so seductive.  The call and the challenge to “pursue righteousness, to sustain a drive toward excellence” is exhausting at times in the face of the relentlessness of the opposition.  But Jeremiah hovers in the wings. 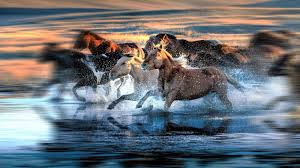 Eugene Peterson continues: It is unlikely, I think, that Jeremiah was spontaneous or quick in his reply to God’s question. The ecstatic ideals for a new life had been splattered with the world’s cynicism. The euphoric impetus of youthful enthusiasm no longer carried him. He weighed the options. He counted the cost. He tossed and turned in hesitation. The response when it came was not verbal but biographical. His life became his answer, “I’ll run with the horses.”[2]

So, on a gray and cold rainy day in early January, there’s the challenge - do I mentally and emotionally and intellectually crawl under a warm and wooly afghan with a good book - - or “tack up” and get on the horse?