There were some sights and sounds that will always stick with me. They enter my consciousness whenever I hear government officials talk about nuclear weapons and their possible use. 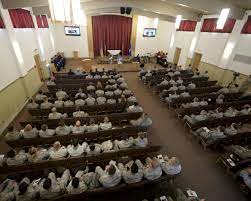 The sight was standing in the chapel at Ellsworth Air Force Base and looking up toward the ceiling. There was a sign that would begin to flash to warn of an incoming threat, likely a nuclear armed missile from a Russian submarine off the west coast of the U.S. It meant all those airmen sitting in chapel at worship had about twenty minutes to get in their nuclear armed bombers and get them off the ground for retaliation before the base was decimated. 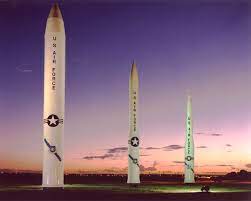 The sound was listening to the Commander of the Ellsworth Missile Wing. At that time, Ellsworth was surrounded by 150 minuteman missiles, each with a one megaton warhead. Someone in our tour group of peace people asked the Commander what he would do if it were clear an incoming Soviet missile was headed for the base. I can still hear him shouting, “I will be standing right here and all our missiles will go.” My God! That’s 150 megatons of nuclear explosives, while Hiroshima was only about 15 kilotons (15,000 tons of TNT in explosive power). Try 1,000,000 tons of TNT with those Ellsworth missiles, times 150. I’m sure the Commander knew he would be a shadow in an instant should only a small tactical nuke hit the base. A barrage would create a firestorm all the way to Brookings and beyond.

It’s been estimated by scientists at Los Alamos since shortly after World War II, that it would only take in the neighborhood of 10 to 100 of the types of nuclear weapons held by the U.S. and Russia, to destroy the entire planet. That’s an amazing statistic seeing that one estimate is the U.S. in 2021 had 3,750 nuclear weapons; 4,178 with the U.K. and France. It’s estimated Russia has more, perhaps as many as 6,000. 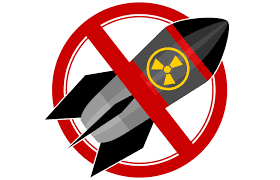 It’s also no wonder that much of the rest of the world is alarmed by these statistics. Many countries have signed the United Nations treaty declaring nuclear weapons illegal. The text of the treaty, that went into effect after being signed by fifty nations on January 22, 2021, reads:“Nuclear weapons are, as of now, unlawful to possess, develop, deploy, test, use, or threaten to use.”
The U.S. has enabled several countries to “deploy” nuclear weapons: Italy, Belgium, The Netherlands and Germany. Since the Ukraine invasion, Poland wants to be included, although the U.N. treaty outlaws the transfer  of nuclear weapons and forbids signatories from allowing any nuclear explosive device to be stationed, installed or deployed in their territory.

The Pentagon calls all these European deployments “defensive” theatre nuclear weapons. They only have 11.3 times the force of the Hiroshima bomb. If the U.S. was ready to face Armageddon because of the threat of Russian missiles in Cuba back in the Kennedy era, we must recognize Russians might feel a bit nervous about all those nukes we’ve placed in their neighborhood.

Of course, no nuclear weapons state has signed on to the U.N. Treaty and already since its passage Russia has threatened to use nuclear weapons and the U.S. has come close in response. The President recently declared: “We have not faced the prospect of Armageddon since Kennedy and the Cuban missile crisis. We’ve got a guy I know fairly well. He’s not joking when he talks about potential use of tactical nuclear weapons.”

Even before the Russian invasion of Ukraine, the Bulletin of the Atomic Scientists warned that the globe sat at “dooms’ doorstep.” The Doomsday Clock is at 100 seconds to midnight, the closest it has been to “doomsday” since the creation of the clock in 1947. 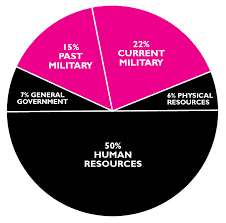 The military budget request for 2023 is $813.3 billion. $50.9 billion in the bill is earmarked for nuclear weapons. In 2021, the total budget for the State Department and USAid was 58.5 billion. Obviously, talking, listening, negotiating, working out our differences and aiding those who suffer, is less critical to our “security” than updating our nuclear weapons systems. As Wendell Berry writes, “We should recognize that while we have extravagantly  subsidized the means for war, we have almost totally neglected the ways of peaceableness.” What if we put our money where our mouth is, when we talk peace? 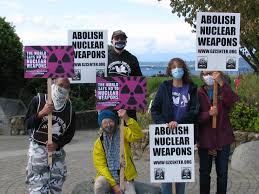 Worse, preparing for and threatening nuclear war is a crime against the spirit of creation and the creator. It’s an invitation to hell on earth; opening the door to the devil incarnate. Nuclear weapons have been declared immoral and illegal. Now is the time to eliminate them!