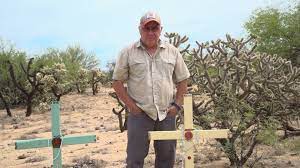 Alvaro Enciso needs help! In order to complete his chosen task, at the present rate of four crosses a week, he will need to live to be 127. And that is only to fulfill the requirements of the past. Each day adds more lives to remember and liturgies to hold.

No, I’m not talking about Ukraine. Although those pictures on the evening news of the host of crosses in among the trees where Russian troops once roamed were horrifying. These crosses are closer to home. I’m talking about our southern border. Alvaro is remembering the forgotten dead of the desert, trying to reach the “home of the brave and the land of the free.” 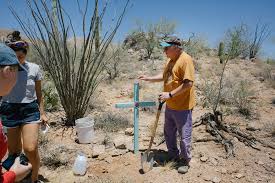 Using a GPS tracking device and a database provided by Humane Borders, Alvaro and his companions go to the sites in the desert where those seeking sanctuary have died. They dig a hole in the desert floor, add cement and water and plant a cross. A liturgy is shared! Prayers are offered! The deceased is re-membered!

The database at the time I read Alvaro’s story includes 3,600 recorded deaths. The deaths continue, and will, till we find the will and the way to change our immigration system. Making it more challenging for those seeking to immigrate by building walls, separating children from their parents or busing them to unprepared locations, will not stem the tide. Present policy simply supports the large number of coyotes, semi-truck ovens and crosses in the desert on our southern border. 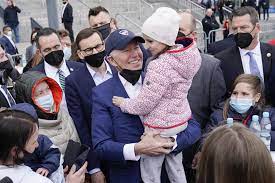 Then there is the question of immigration from Ukraine. The administration found ways to allow 100,000 refugees from Ukraine to quickly enter this country. More than 22,000 were admitted along the US-Mexico border. It’s a modest number given the millions who have fled the devastation in their homeland. Certainly our borders need to be open to them. But the question remains for many, why this distinction? Many from the global south are also fleeing violence and destruction in their countries.

One laments how the billions spent on weapons of war destroying Ukraine, might better be spent on making homelands habitable for refugees; making their own countries “homes of the brave and lands of the free.” One laments the backlog of 500,000 immigration cases stalled in the system, unable to shake funding from the weapons manufacturers for the asylum resolvers. But this is a lament, not recognizing many Gandhis in the Kremlin or advocates committed to nonviolent social change in the halls of the U.S. Congress. 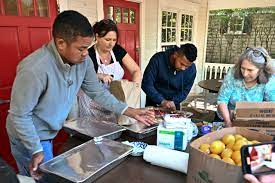 A friend on Marthas Vineyard wrote me the other day, as their island was at the top of the news. She remarked: “As you can see from today’s news, we have had a little excitement on the island in the last 72 hours. Most of the folks have been transferred to Joint Base of Cape Cod which is set up for disaster relief support for large numbers of people who are suddenly without resources. The response from the island and beyond was overwhelming. The emergency generosity has set in motion the establishment of a fund that will be used for emergency migrant support going forward. Sadly, this could happen again.” 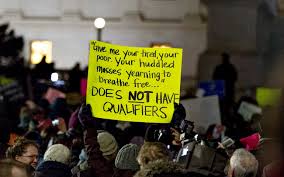 “Give me your tired, your poor,
Your huddled masses yearning to breathe free,
The wretched refuse of your teeming shore,
Send these, the homeless, tempest-tost to me,
I lift my lamp beside the golden door!”

And for the Christian:

“I’m pretty sure it doesn’t say, ‘When I was hungry you put me on a bus, when I was thirsty you booked me a one way plane ticket,’ or ‘when I was a stranger you treated me like cargo and shipped me off for political gain.’” (Author Unknown)