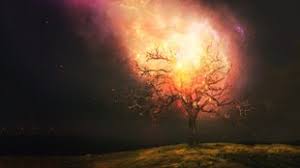 When I first learned about the story of Moses and the burning bush (Exodus 3: 1-9), I thought of Moses as some kind of superhero alone on the mountain top having this strange encounter with God that was unlike anything I would ever know or ever could know. Then I read Elizabeth Barrett Browning’s poem, Aurora Leigh, in which she writes: “In this twofold world . . . Earth’s crammed with heaven, And every common bush afire with God; But only he who sees, takes off his shoes, The rest sit around it and pluck blackberries.”

This wonderful, terrible, confusing, bitter and yet beautiful world is crammed with hopes for justice, and songs of peace, and hearts filled with courage, and every bush is aflame for those who have eyes to see and ears to hear and hearts to engage in the struggle to make this a more just world. 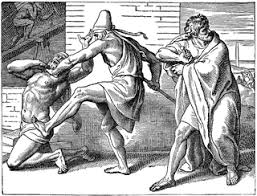 Moses is there on the mountain top, tending the flock of his father-in-law, Jethro. A mundane task if there ever was one. He is there because he is a fugitive. Only a short time ago he was in Pharaoh’s land listening to the cries of his people who were being oppressed by their task masters and forced to watch their children being murdered. Borrowing a phrase from Martin Luther King, Jr., Moses found that he was maladjusted to the injustice of the scene, so he struck back and killed one of the Egyptian overlords. Then he became a fugitive from Pharaoh’s justice. With a price on his head, he fled. Now, on the mountain top, Moses sees a new vision of the world. God too has heard the cries of the oppressed and seen the affliction of the people and the murder of the children. And God promises to deliver the people from their oppression. That is what this story is about. There is a parallelism in the text. Moses encounters God not only in the burning bush, but also in the struggle to end oppression and the murder of children. 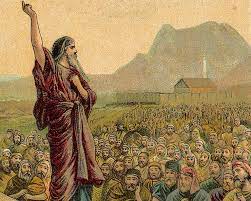 As the story unfolds, Moses returns to the land of Pharaoh and begins to organize the workers. In biblical history there is a prolonged and bitter struggle between the Hebrew people and Pharaoh. And the undertow of violence is always present. The death of the Egyptians first born parallels the death of the Hebrew children. It is as if the storyteller feels an obligation to balance the account. Violence begets more violence. I want to return to the issue of violence, but first it is important to see that Moses must be thought of as a labor organizer. He is the lead negotiator. He leads the people on a general strike. And he organizes a walkout–the first labor strike and walkout in the biblical story.

Throughout the rest of the Exodus story and throughout the biblical story we see again and again that God gives us a choice–a faith choice or a fear choice. We can believe that we live in a present that has a future that anticipates a new song, a new wine, a new society, or we can surrender to a kind of fatalism that accepts that there is no alternative to the present–truth and love are forever on the scaffold, that military power is the final solution to the world’s problems. We won’t teach our children the truth about our history and the painful realities of the present. And because ours is an “at will” state, workers have no rights.

The church at its best is always in an exodus community. We are a people who live by hope, holding on to the promise that we are all created in the image and likeness of God. It is our human vocation to remind each other of the presence of God. History teaches us that this is a stoney road to trod. 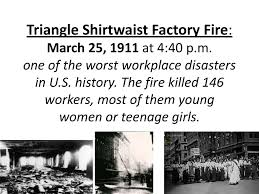 We learned this morning about the TriangleShirtwaist Factory fire in Greenwich Village in 1911, in which 146 people died because the doors were locked. I also want to remember this morning the Lowell Mill strike. In the 1830s, before women had any rights, when  they worked 13 hour days under wretched conditions, the women who worked in the mill organized and went on strike. The strike was crushed, of course. But against all odds, the women created the first union of working women in the United States. We don’t do a good job of teaching labor history, or racial history, or US history because it is painful for us to learn about things we would like to forget. Robin DiAngelo popularized the phrase “aversive racism.” We might call it “aversive history.” The gap between our ideals–the people we wish we were–and the reality of our history, the gap is so great we just avoid thinking about it.

When I first learned the Exodus story, I thought Moses was some kind of superman. He was a superhero empowered by the Almighty to swoop into Egypt and rescue the Hebrews and deliver them to freedom. The story really did not have anything to do with me. Only later did I realize that he was part of a community that shared a history of seeking a better world. But in our hope for a better world I want to remember this advice from Bill Coffin who said, “If you love good, you have to hate evil, otherwise you are sentimental. But if you hate evil more than you love good, you simply become a good hater” and the world already has too many such people. We do not need more good haters, we do need more good lovers.

I want to return briefly to the issue of violence. Candidly, the story of the exodus does not end well. God promises the Hewbrew people that he will lead them to a land flowing with milk and honey–the home of the Jebusites and Hittites, and many other tribes and nations–and he will give them this land. It is a story that underlies much of the violence we see between Israel and the Palestinians. It is also a story that informs much of our own history. 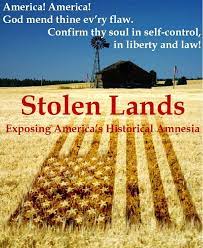 We, and by “we” I mean White people in general and White Christians in particular, we are only beginning to deal with the fact that we live on stolen land–land that once belonged to Native peoples. Because the history of labor struggles and racism and anti-indianism are painful and difficult, we don’t want to talk about these parts of our past. We find ourselves wishing for a better world and then, not knowing what to do, we join the Bystanders Association of wishful thinkers.

There is a better way. That’s what Labor Day is about. It is reminding us that there is a better way–when we come together in solidarity we can create a better way. This is also the message of the gospel. There is joy in collective action. Learning the truth about ourselves and our history is liberating, because it sets us free to make amends and fight for a better day.  We need to learn about this history, which is our history. We need to begin a conversation about restorative justice. What does the Lord require of us but to seek justice, love kindness, and walk humbly with God and with each other. How do we do that? Not, I think, as a people filled with regret and remorse, guilt-ridden and shamed, but rather as a people who believe that earth is crammed with fire and every bush is aflame with hope. That’s the word for us, on this Labor Day.