Beyond the Status Quo 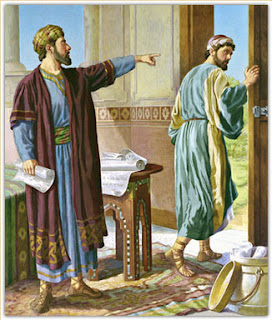 Luke 16: 1-13  Most commonly this story is called “The Parable of the Dishonest Steward,” or  “The Shrewd Steward.” I think this approach to the story, though generally accepted, is misguided for a couple of reasons. If the story is about the dishonest steward, we think of the steward, the manager of the loan office, as a crook. He’s guilty of something. We don’t know what he did, but we know he is dishonest. He’s a cheat. He’s not to be trusted. And, we assume the master who fires him has cause. So right away it is a story that is about social class and class bias. If we think the steward is not dishonest but shrewd, that’s not much of an improvement. He is now a guy who knows how to work the system. In a game of winners and losers, he’s the fox in the henhouse.

I think  Jesus told this story and Luke repeated it to help us think about what it means to live as followers of Jesus in a world like this. Jesus came to bring good news to the poor and release to the captive, recovery of sight to the blind, and set the prisoners free. Think of this parable not as a story as Jesus’ invitation to join him in an effort to turn the world upside down.

William Herzog, a biblical scholar, calls the parables “subversive speech,” and  I think he is right to call all the parables subversive. The purpose of the parables is to get us thinking about being followers of the way of Jesus. That’s what the first Christians called themselves, “a People of the Way.” They were part of a countercultural movement. Their aim was not just to upset the status quo, but to replace it. 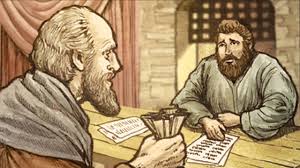 To begin with, let’s recognize that the role of the manager, the steward, is fraught with danger. He is always between a rock and a hard place. He is in charge of the lending office. He is free to charge whatever interest on the loans that he makes that the market will bear. At least in some instances the interest rates are usurious. The master always wants to maximize his gains. The debtors are always fighting to survive and keep enough of whatever wealth they have to hold body and soul together.  The manager is the person in the middle. Every day he has to meet goals set  by the  master, deal with the unhappy debtors, and find a way to make the whole thing worth the trouble. It’s a daily struggle that does not end.

Not surprisingly, someone starts a rumor about him. Maybe the master had decided that the manager is getting too much power and it’s time for him to go. Maybe an important debtor is unhappy. Maybe someone wants the manager’s job. We don’t know the source of the complaint but it’s enough to get him fired.  The master calls the manager into his office and gives him a pink slip and tells him to go home. That’s what happens in verses one and two.

In verse three the now unemployed manager assesses his situation. He has little chance of competing with day workers for their jobs. Asking the person who just fired him for a second change isn’t going to work. There is no chance of getting a good recommendation for another job. Herzog characterizes the manager’s unemployment as a death sentence. The manager is about to join Lazarus sitting at the gate of the rich man begging for food. The situation is critical. “What shall I do?” That’s the central question in verse three. This is an existential crisis. Think of what happens today when someone is fired in this manner. They don’t just lose a paycheck, their income. They might lose their health insurance, maybe their car, their house. What shall I do? That’s a hard question. 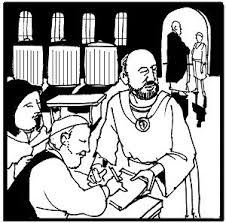 In verse four he makes a decision.  He decides to contact everyone who owes the master money and renegotiate their debt. He cuts one person’s debt by as much as twenty and another’s by fifty percent, and so on. One way to think about what the shrewd manager is doing is that he is acting in pure self-interest tinged with revenge. The master is going to be sorry. But there’s another way to think about this story.

I want to say that receiving the pink slip is the manager’s Damascus Road encounter. It is a conversion experience. He has been blind-sided. Suddenly he is no longer working for the one percent, he has joined the ninety-nine percenters. The parable is no longer about the dishonest steward. The question now is: What is our responsibility in such a world as this? What shall I do?  That is, “what is my responsibility?”

I am interpreting this parable as a story of religious conversion and spiritual awakening. The pink slip forced the steward to assess his situation and think about his choices and come up with a plan of action. He thought he was going to find himself living on the streets, but then realized to his own amazement that he could become an agent of change working to create a new society. 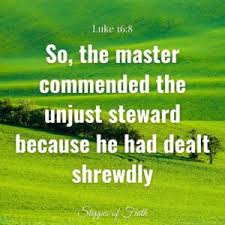 Once he embraced the possibility of change something else happened. The rich man, the master, changed too. Rather than pressing charges against the dishonest steward, and calling him an unhappy former employee out for revenge, the rich man praised him. Luke doesn’t tell us what kind of conversations or demonstrations or negotiations were needed to bring the rich man and the debtors together. You have to fill in the blanks. Each generation has to write that story afresh, as if for the first time. Faith is a living faith. Discipleship is a way of life. One generation cannot tell the next generation what it has to do.  The situations change, but not the invitation to become followers of the way of Jesus. What I hear Jesus and Luke and many others say to us this morning is that the church in our generation and in every generation must live and work in solidarity with people of good will wherever they are to create a world fit for people, and a people fit for this world that God has gifted to us. So be it. Amen.