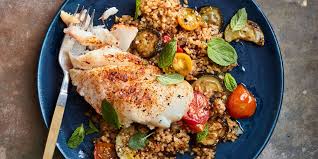 slaw, savory rice pilaf, and a  colorful Caprese salad all topped off with a gluten free plum tart for dessert and, the high point of the evening, stimulating conversation around the weekly portion of text.  We got re-acquainted with the Korach -Moses narrative. Thank goodness we had a sustaining meal in our bellies!!

The passage (Numbers 16:1-18:32) is a difficult one. Many layered.  Uncomfortable.  Challenging. Far too complex for analysis here. Definitely worth reading.  What impressed us about the narrative last night was the lack of meaningful  communication between Korach, who questions the legitimacy of Moses' leadership and Moses himself. 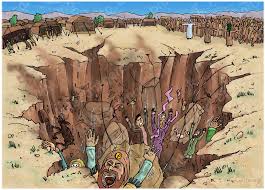 The interchange is confrontational.  There is really no effort at dialogue and communication.  It does not go well for Korach and his disgruntled followers.  Divine wrath breaks out against them and “…the ground under them burst asunder, and the earth opened its mouth and swallowed them up with their households, all Korah’s people and their possessions…and a fire went forth from the Lord and consumed the two hundred and fifty men offering incense.”

As we pondered the story last night, we wondered how the dynamics might have been different if Korach had come to Moses with a request to sit and talk about what was bothering him. What if there had been a genuine dialogue for the sake of understanding between these two cousins who were so alienated from each other?  What if in his anger, Korach had been able to tell his story of how he felt slighted and wounded - - second best.  What if, from his place of authority and esteem, Moses had been able to exercise compassionate listening?  What if they had sat side by side and placed the issues before them instead of between them? What if, in the listening and hearing, a more creative and inclusive solution might have  been reached? 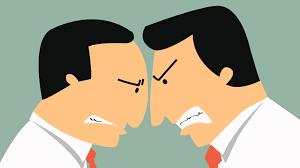 But, alas, the two men did not listen to or hear each other.  The wrath of the Holy One intervened and there was great loss of life.

The story was troubling for us because there were elements of it that seem so contemporary.  There is so little meaningful communication and willingness to understand one another in our national politics.  It appears that the highest court in the land is free to make onerous decisions without listening to the cries of the human lives affected in an adverse way.  Lying and manipulation have supplanted dialogue around creative ideas and solutions.  The environment is increasingly threatened by a failure to listen to and hear the scientific evidence that is predictive of a declining quality of life both on and for the planet. 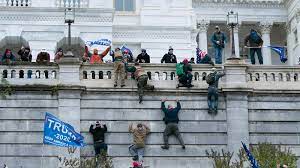 In the story, Korach’s people used their incense burners as symbols of their weapons of protest against the centrality of leadership that rested in Moses.  In the modern conflict, at the instigation of a dissatisfied leader, an angry mob takes up weapons to assault the central symbol of democracy. The use of dialogue and argument in favor of a reasonable solution has failed.  We are left with weapons of choice - bear spray, clubs, long guns, nooses - their use fueled by angry screams and shouts destined to ignite irrational fury.

The story of Korach and his rebellion, perhaps 2500 or more years in the past, feels like a cautionary tale.  While it is unlikely that a wrathful deity will intervene in such a decisive way as to swallow up adversaries, or burn them to a crisp, in our current reality, we may end up exercising those same capacities, metaphorically, on ourselves.

Where meaningful listening and dialogue in the service of understanding have gone missing, it is difficult to see how creative, life affirming decisions and processes can begin to ascend into public awareness and consciousness again with sufficient power to subvert the destructive  intentions and movements now afoot.

A bit later in the grand saga of Israel and its relationship with the Holy One these words appear in Deuteronomy 16:19-20. They are given to the magistrates and officials in the tribes of Israel: You shall not judge unfairly: you shall show no partiality; you shall not take bribes, for bribes blind the eyes of the discerning  and upset the plea of the just.  Justice, justice you shall pursue, that you may thrive and occupy the land that the Lord your God is giving you. 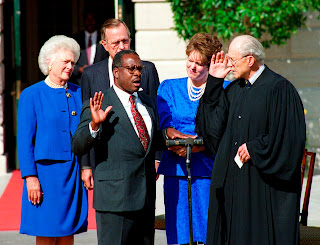 Our elected officials and appointed judges swear oaths with a hand on the Bible.  Do they ever actually read it?  It becomes clearer daily that we will not thrive in this land if they do not have some  deeper and more profound sensibility of their responsibility to humankind such that their justice becomes broader and deeper than the need to retain political power and wealth at all costs.

Torah commentator, Simhah Bunem, wrote “This command also means to “pursue justice justly,” for just goals can never be reached by unjust means; the worthiest of goals will be rendered less worthy if we have to compromise justice to achieve them.”

Our study group found the narrative about Korach and Moses challenging, difficult, and unattractive…but we are still thinking about it.