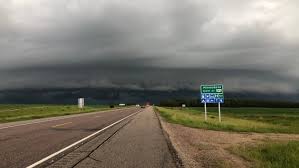 After work last Thursday we decided to have a take-out meal. I went to get it while my wife secured some chairs and newly purchased flowers in the back yard. We were being warned a storm was coming with some serious wind; the radio said 90 mph was possible. As I left the car to go into the restaurant to get our order, I felt a sizable push from behind. Looking to the south, I was transfixed by the look of the sky; dark as the dead of night but with a leading brown edge that made one think of the dirty thirties. I hurried into the store, got our meals as quickly as possible and hurried home. Almost as soon as we closed and locked the door, the siren sounded and we headed for the basement.
As we tried to find someplace to sit and a table of some kind for our food, we could hear the howling roar of the wind outside. Then, the lights went out! Standing in the dark with your dinner in a bag, with a raging wind outside and the sound of things hitting the house, is not the best way to share a meal. Fortunately, although it was hard hitting, the derecho was also fast moving. As we could gradually begin to see out the window in the cellar door, we made our way back upstairs. 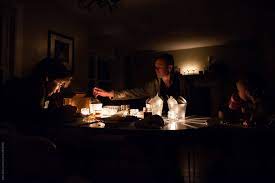 With the help of a few candles and the slowing of the wind outside, we were able to eat our meal together at the dining room table; not in front of the TV watching the 6:00 news. 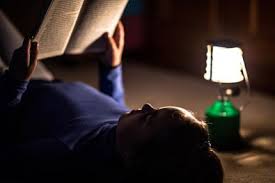 It wasn’t till the next morning in the light of day that we realized how much damage had been done. Trees were down all over the neighborhood. Too many were resting on damaged homes. So many pines! Looking at the root systems pulled out of the ground when the trees fell, one could understand why they fell. The roots seemed shallow and not very long. In wet soil from the previous rains, it was a wonder so many pine trees survived. Then, pulling sticks out of our yard, some of them shot into the earth as if from a gun, there was further evidence of the strength of the blast.

Two of our neighbors homes have just enough space between them to hold a full grown pine. That’s exactly how it fell. All the way from the boulevard, it dropped across the sidewalk right in that narrow  alley between the homes. That seemed the exception. Many were not so fortunate. 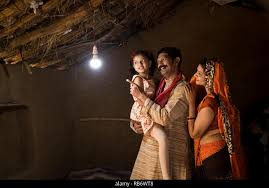 One of my fondest memories about electric light was the night I stayed with a family in a small rural village on the banks of a draught stricken river in India. We were honored with an evening welcoming ceremony in the dirt-hard center of the little community. They had just been electrified. To their obvious delight, there was one light bulb hanging in the middle of our circle. People clapped and cheered as it was turned on for our welcoming.That was the same poor village where my host family fed me their evening meal (sitting and smiling and watching me eat), and then provided me a cot for sleep in the outer room with the family cow. It’s also the village where the Gods were arranged along the cliff overlooking the dried-up river bed, where they would hopefully encourage rain, enable a crop and ward off starvation.

There is a difference to a life style that rises with the sun and retires when the sun disappears. There is a difference to the way one interacts with the natural world when you are part of it, rather than encased in one of human invention. Perhaps if we voluntarily turned off the lights, and the TV, and the computer, and our phones more, we would see what we are slowly losing. 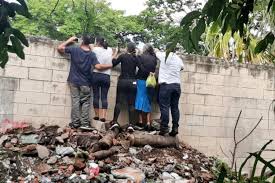 Once, with Witness for Peace in Nicaragua, I lived for a few days with Nicaraguans, refugees in their own country. Driven out of their homes by the Contras they had set up a temporary community close enough to the armed conflict that they had to post security around their living space. Still, several had died, killed by the contra.

We were invited to participate in a prayer service for the dead. We met under a shelter as the rains started, only to find they intended for all of us to walk to the places where members were killed, to offer prayers there. Slipping and sliding in the mud, we walked from place to place. We offered prayers and our bodies to the elements. We were drenched to the bone.

It’s the most meaningful prayer service I’ve ever attended!

In short, weather at its best, or worst, invites us to witness; that we are part of the natural world, try as we might, to escape.