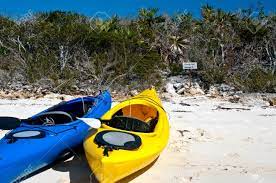 I sat with him earlier this week. Grief permeated the room. He had experienced the death by drowning of a long time friend and house guest the week before.  The story spun out.  “We were out kayaking.  The sun was warm.   We decided to beach the kayaks and go for a swim.  The ocean looked calm enough - inviting.  Not in the water 5 minutes and a strong rip current started to pull us out.  I had been in rip currents before and knew not to panic. Even after so many years of friendship, I didn’t know my friend was not a strong swimmer. I shouted to him not to panic…to roll over on his back and let the water carry him…we could swim parallel to the shore and make our way out of the current. Fear took over. I got to him…tried to keep him afloat…the waves kept washing over us…his face turned gray…he rolled over - face into the water…I knew he was gone…I held on to him as long as I could…had to let go and head for shore for help…all too late.  I was his host. I was responsible for his safety.  I am in such a dark place now…I  should have known…I am responsible.”

Loving friends bring food.  Texts of condolence keep “pinging.”  Well-meaning folks say “You are not to blame…it was an accident…you did everything you could.”

Not helpful.  When I ask what message I might convey to people who want to visit or call my friend says “Just tell them not to say ‘You are not to blame.’ It makes things worse.” 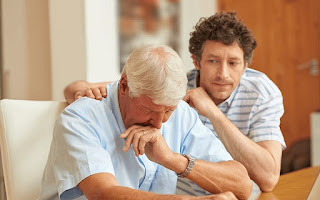 For two hours, we sat and talked, or, rather my friend talked and I listened, as he poured out his anguish at the loss of his dear friend. He had held his friend in his arms and watched him die. In the very center of his personal truth, he felt responsible for his friend’s life and for his death. And, indeed, to say “You are not to blame” only inflamed the terrible wounding - - not permitting him to feel the darkest depths of his pain within the safe surround of another human being.  How courageous of him to be able to say how much the denial of his truth further wounded him.

I wondered about how often I might have said something similar, perhaps attempting to make myself more comfortable in the face of unspeakable suffering.  Knowing my friend’s truth made it all the more possible to sit with him in his ash heap without feeling like I needed to make him or myself feel better.  To be able to sit in silence in the darkest truth is a gracious gift.  I came away blessing him for the time we shared.

As I was leaving his home, he said “You are Pooh and Piglet.”   I must have looked a bit startled.  He explained about the story of Winnie The Pooh and Piglet visiting their gloom and doom donkey friend Eeyore.  Eeyore was not having a good day and was not good company.  Pooh and Piglet just sat with him.  And little by little, Eeyore began to feel a little better. 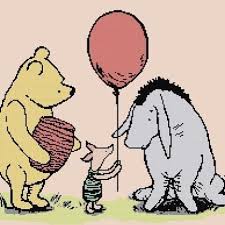 On waking this morning, I began to make my own meaning of the event as my friend had described it.   He had done three most holy acts of Being in the rough waters of the rip current.  He was Presence for his friend at the risk of his own life - Presence for his friend to the end.  He was generous Unconditional Love - not withdrawing Presence until it was clear that it was no longer needed. He was Witness to his friend’s passing.  His friend did not die alone.  He died in loving arms. His friend’s story would be told back on land to those who waited.

States of Being: Presence…Witness…Unconditional Love.

As I carried these early morning insights into the day, it was with a clearer sense of how to simply Be in the world: Present - - Witnessing - - Loving without Condition - - maybe just one moment at a time would be quite manageable.