Come Out and Play With Me 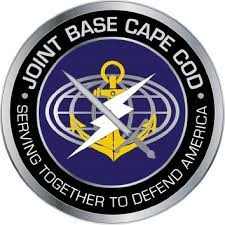 There are two articles in interesting juxtaposition in the Saturday June 5th Metro section of the Boston Globe.  The lead article (General Threatens Cape’s Business) tells the story of the lack of public support for the creation of a machine gun range at Joint (military) Base Cape Cod:
“…the commanding general has threatened to order the thousands of soldiers scheduled to visit the base every weekend this summer not to patronize local restaurants or other business.”
At issue is the base’s intention to clear 170 acres of wooded land in order to establish a training and practice area for the use of machine guns.  The local populace has resisted, using their power to contact their Congressional delegation “swaying opinions against our project.”  According to the article “Brigadier General Christopher M. Faux complained, saying: ‘the only folks that speak up are the naysayers, activists and anti-military groups.’”

Immediately below the first article is another: The Life of a Single Father. The second article has captured the imaginations of the wide population served by the Boston Globe.  Two swans, mated for life, had just begun hatching their flock of cygnets when the mother swan died suddenly of unknown cause, leaving the father swan to care for the brood.  It is known that swans go through a grieving period if they lose a mate. A vet from the New England Wildlife center noted “I think he may be so busy taking care of his babies that he may not be going through a mourning period yet.” 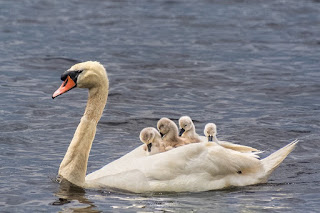 I have been struck by the placement of the stories and what they say about the level of the spirit of cooperation, collaboration and the rise to duty that they impart.

On the one hand, there is an issue about who will determine whether a military effort or a civilian effort will prevail in the decision making process about land use on Cape Cod.  As the headlines describe it, it seems that at least one of the parties, the one with the literal fire power, is ready to “pick up his marbles and go home” if the other party will not play the game according to his wishes.  Meanwhile, in the center of a great city, a father swan struggles to go it alone and assume full responsibility for the nurture and protection of his offspring until they are old enough to fend for themselves, perhaps putting off his own in-born need to grieve his lost mate.

At the risk of over anthropomorphizing, I find myself pondering the level of maturity and intelligence and empathy and cooperation in each situation.  How is it that one member of the animal kingdom can be so limited in its ability to listen and hear and understand, to communicate and collaborate with his fellow human beings to come to some reasonable solution while on the other hand, another, much simpler member of the animal kingdom knows instinctively that some sacrifice on his part is necessary so that survival is possible for his offspring.

The stories, of course, lead my mind to the utter lack of collegiality and cooperation that abounds without limits in the halls of Congress.  I wonder where the ability to sacrifice, to collaborate, to cooperate for the greater good has gone? 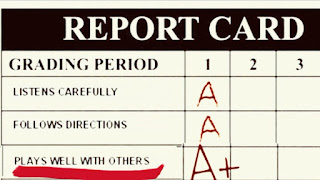 In our highest realms of leadership it seems as though the “grown-ups” have forgotten the kindergarten report card assessment: “plays well with others.”  I read recently that there are Eskimo tribes, who when war with another tribe is brewing, hold a contest between the two best poets of each tribe.  The jury is made up of an equal number of members  from each of the tribes.  The winning poet wins the war for both sides.   Imagine such a solution for breaking the gridlock in the US senate!!  The more I think about it, the clearer it is to me that our esteemed houses of congress have lost the spirituality of playing well together.  And when we lose that, we lose our resilience and our capacity for compassion and cooperation.
Matthew Fox, in his 1983 book, Original Blessing: A Primer in Creation Spirituality points to “our so called defense departments, so creative at building sadistic weaponry, (but)lacking the imagination (such a critical part of play)when it comes to moral equivalents for war. Play is meant to be a way out of aggression. But our culture has forgotten the value of play on so many levels and so we lock ourselves into trillion dollar military budgets, and imagine we can buy security.”

So - I want to envision members of congress, pulling out all the stops in non-competitive play. Can we see that possibility?  What might it look like for Democrats and Republicans to re-learn the skills of the playground: the cooperation it takes to use the see-saw;  skill and listening required to push one another on a swing so that it is satisfying for both “pusher” and “swinger;”  learning how to take turns with the toys in the sand-box; the cooperation and determination required to run a three-legged race. 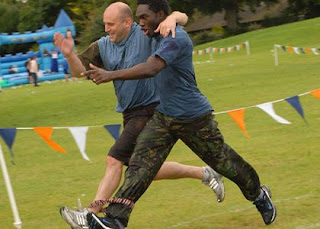 The spirit of play seems inherent in the cultivation and nurturing of wisdom. Indeed, the Book of Proverbs reveals wisdom as the Divine playmate: “I (Wisdom) was by God’s side, a master crafter, delighting God day by day, ever at play in God’s Presence, at play everywhere in the world.” (Proverbs 8).  A lot of intellectual knowledge operates in our world, for good or ill, but perhaps we could  put away all that brain stuff for a moment or two, become as creative, imaginative, joyful children and re-learn how to play well with one another, in the service of a happier, more whole and liberated life for us all.

Just for the fun of it, try Googling “Playmate Song.”  It was surfacing from my memory banks in the twilight between sleeping and waking this morning.  If you are old enough, it will bring back memories, for sure.  Enjoy!