Stanford University is the home of the Martin Luther King, Jr. Research and Education Institute. A volume of his letters and papers the University published has been sitting on my book shelf for several years. There are memorable pieces in it. 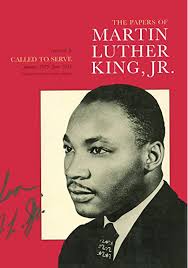 One of my favorite letters is one King writes home to his father during the summer of 1944. This is during his first excursion to the North, where he worked in the tobacco fields of Connecticut. Here he had his first experience of an integrated society and an integrated church. You can hear the surprise in his voice as he writes, "We go to any place we want to and sit any where we want to." King later traces his call to the ministry to this summer experience, when he was still a junior in high school and felt an "inescapable urge to serve society."

A later paper in this volume is one he wrote in Seminary on the Old Testament prophet Jeremiah. Knowing what we know now about Kings' life, and death, the paper is hauntingly prescient. He writes, "What is society's reaction to such men (prophets like Jeremiah)? It has reacted, and always will react, in the only way open to it. It destroys such men. Jeremiah died a martyr."

King preached six different times at the Riverside Church in New York City. Those recordings have recently been released by the Church and Stanford. It was a trip back in time for me to listen again to "A Knock at Midnight," a sermon I heard King give there in 1964, while I was a Seminary student across the street at Union Theological Seminary and working in the Riverside Youth Department. 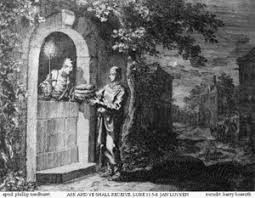 In the parable a man is seeking three loaves of bread from his neighbor to feed an unexpected guest. The problem is he is knocking on the door at midnight and the neighbor is already in bed. For King, 1964 was midnight in the social order. He believed we needed to get out of bed and address the three social evils of the time: militarism (especially nuclear weapons and soon the war in Vietnam); racial dignity and racial justice; and materialism with its consequent poverty. With respect to the latter, he even believed: “We are saying that something is wrong with capitalism … there must be a better distribution of wealth in this country for all of God’s children and maybe America must move toward democratic socialism.” That conviction and broadcasting it, will surely make you a target in 2021 as well.

The loaves of bread King wanted were faith; faith in God, the neighbor and the future; hope and love. He worried that it was late, midnight, in the social order, the psychological and the moral order. He looked and prayed for the day when the neighbor would wake up, get out of bed, and provide the sustenance needed. He was especially hopeful the community that offered the "bread of life" every week, would lead the way.   Sitting in the first few rows with the Youth Department on that Sunday morning, gave us first chance to shake his hand after the service. I know for many of those young people it was a memorable and inspiring day. I needed to be reminded of the sermon content after all these years, but remember well his presence. 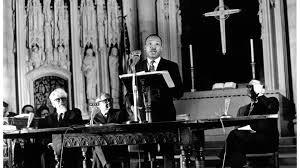 The A.J. Muste Memorial Institute publishes an Essay Series of Kings' work. It includes the sermon "Loving Your Enemies," his "Letter from a Birmingham Jail," and his "Declaration of Independence from the War in Vietnam," the latter speech also given at Riverside Church. Copies will be distributed to my Peace and Justice class this semester. They would be good reading for everyone on a holiday that bears Kings' name. The Governor might want to add   the booklet to the history curriculum she's proposing.

Kings' last speech before his assassination in Memphis is available on the internet. He wasn't feeling well that day and didn't intend to address the gathering. But his colleagues convinced him the gathered crowd wouldn't leave till they heard him and told him he had to go to the auditorium. As always, his speech was laced with Biblical illustrations and allusions. Once again, he seemed prescient. He seemed to know his future. He said he'd been to the mountain top, seen the promised land, knew he might not get there himself, but that was enough. "Mine eyes have seen the glory of the coming of the Lord." He had to be helped to his seat as the speech concluded. The next day he was dead! 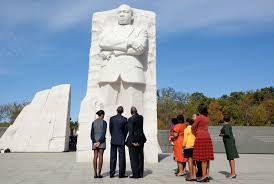