My seminary teachers told me to read with the Bible in one hand and the newspaper in the other. Faith, they said, is a conversation, a dialogue, a living thing. So ever since I have been reading with the newspaper in one hand and the Bible in the other. And the news is not so good.  Four and one-half million cases of coronavirus have been reported in the US, and 200,000 people have died from the disease according to official statistics. And we all wonder and worry about what happens once the school year starts this fall. On the other hand, Black Lives Matter is forcing us to have a new conversation on race. The adult education class here at Pine Valley Christian Church is to be congratulated for tackling the tough issue of racism and white supremacy in America. I have listened to the TED Talk the class is discussing. The speaker says that as a nation we are at a tipping point. The history that we have tried to ignore or soft peddle for too long has to be faced. The chickens are coming home to roost. Watching that TED Talk I thought of William Faulkner’s line, “History isn't dead; it'snot even past." 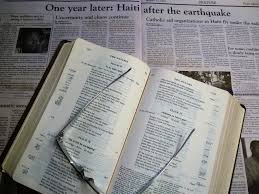 On a personal level, many of us are trying our best to stay home. Some of us have cabin fever. We are asking questions. How long will this go on?  What’s a person going to do? What does our faith teach us?  So if you have your Bible handy open it to Psalm 148.  It is called a psalm of praise. Some people call it a hallelujah psalm. It may have been written for the dedication of a place of worship. As you read it you might think about celebrations or dedications you have attended. Maybe you participated in a house blessing.
Sometime later today and again tomorrow, find Beethoven’s Fifth Symphony or his Ninth Symphony on the internet, and as you listen to that music read this psalm--out loud. Take a deep breath and read it: “Praise the Lord! Praise the Lord from the heavens. Praise God in the heights above. Praise God all the angels. Praise God all heavenly hosts. Praise God, sun and moon, Praise God all you shining stars. Praise God in the highest heavens. Praise God. Praise the name of the Lord.” Halleluiah. Joyful, joyful, we adore thee, God of love.
Some people think this psalm was written when the temple was being dedicated. Other people associate it with St. Francis. I have an image of John Muir standing in Yosemite Valley reciting this psalm to El Capitan and Half Dome. In a world that is being paralyzed by a global pandemic it is no small thing to stand up and give praise. “Yea though I walk through the valley of shadow of death, I will fear no evil.” Do not under estimate the power of praise.
In the very next verse the psalmist declares: “God commanded and they were created, established for ever and ever, fixed by bounds they cannot pass.” Isn’t that an interesting paradox? Creation lasts for ever and ever, but every created thing, every created being has boundaries, which we cannot pass. We live in a web of mutuality and interdependence. Thus, in verses seven and eight the psalmist says: 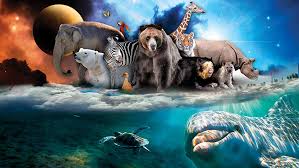 “Praise the Lord from the earth, you sea monsters and all deeps, fire and hail, snow and frost, stormy wind fulfilling God’s command. Mountains and all hills, fruit trees and cedars, beasts and cattle, creeping things and flying birds. Praise the Lord.
The psalmist is telling us that God has a covenant with all of creation. All of creation is an expression of God’s love. God’s love makes creation possible. God’s love sustains creation. God’s love tells the sun to rise in the morning and set in the evening. God is rich in love. God’s love makes life possible.
Then, in the very next verses, the psalmist reminds us in verses eleven and twelve, that we have a role to play. We have a responsibility: “Kings of the earth and all peoples, princes and all rulers of the earth! Young men and maidens together, old people and children, Praise the Lord.” We are accountable for the things that we do, and for the things we ought to have done buthave left undone. We are responsible for ourselves and for the care of the earth to the seventh generation, responsible to our children and our children’s children. The psalmist has a vision of praise that expands our understanding of praise. The meaning of praise has a horizontal dimension as well as a vertical one. Praise binds us to God and to the earth and to all people.
Then in verse 14: “God has raised up a horn for the people.” Hear the sound of the trumpet. Lately Sally and I have been reading a collection of Greta Thunberg’s speeches. They are published in a slim volume entitled, No One Is Too Small to Make a Difference. She is a trumpeter of the Lord. She entitled one speech, “You can’t simply make up your own facts.” She said in that speech, “I’ll tell you this, you cannot solve a crisis without treating it like a crisis. You cannot leave the responsibility to individuals and politicians, the markets or some other parts of the world. This has to include everything and everyone.” 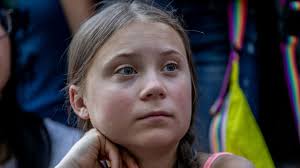 In a speech that she gave at Davos, Switzerland, she was speaking to the one-tenth of the one-percent who own more wealth than ninety-nine percent of the world’s population. She said, “I have come to tell you our house is on fire.” She told them, “You like to talk about your financial success . . .  but your financial success comes with an unthinkable price tag.”  And in a speech to the US Congress she said, “I have many dreams, but now is not the time to dream. Wake up.” God has raised up a horn, a trumpet, for the people. The trumpeter’s name is Greta. She is reminding us of the wisdom of the psalmist. Creation does not belong to us. “The Earth is the Lord’s and the fullness thereof.” Creation does not belong to us, but we bear responsibility for it. 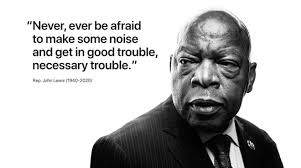 Just recently, our nation paid tribute to another trumpeter of the Lord. If Martin Luther King, Jr. was the drum major, John Robert Lewis was the lead trumpet. This morning I am holding the image of the Congressman’s caisson carrying his casket across a bridge that I believe will soon be named in his honor, the John Robert Lewis Bridge. I learned last week that when he was a child and even to this day his family calls him Robert. Robert Lewis. That’s his name. When he became head of the Student Nonviolent Coordinating Committee he took the name John. He wanted the world to know that he was a disciple of Jesus, so he took the name of a disciple, and called himself John. And he praised God with his words and with his deeds. This strong and gentle and nonviolent disciple of our Lord said, “If you see something wrong, say something. Do something. Go and get into good trouble.”