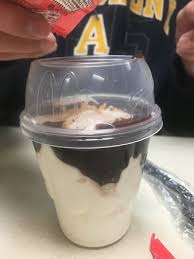 Every now and then we make an excursion after dinner for a hot fudge sundae. We get the small size, which has gotten smaller as the plastic cup gets squeezed and shaped toward the bottom. It makes no sense to me unless they want to give you less ice cream. It's a pain to try and get the hot fudge off the serrated sides and extra work to clean the cups if you want to recycle the plastic.

Last night we also got a plastic cup on top of the sundae. I wanted them to turn it upside down because the top had a regular bottom and would have held more ice cream. I'm not sure why we deserved the extra plastic. Maybe they wanted us to believe it protected us from the waiter coughing or sneezing on our ice cream as he handed it out the window.

The experience made me think of that 1967 film "The Graduate." Remember Mr. Maguires' advice to young Benjamin Braddock?

All of which brings me to a recent article in the Audubon magazine by Zoe Schlanger on "nurdles." Nurdles are little pellets of pre-production plastic. They will become: the cups that hold and cover the hot fudge sundae; the plastic bags from the grocery store; the container for my new toothbrush; the straw, fork and spoon that come with the take out meal. Not to mention the kayak you might purchase. 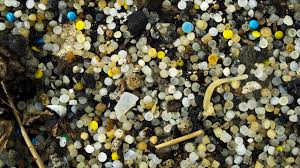 Nurdles are proliferating all around a Charleston, S.C. shipping facility that sends them around the globe. Nurdles are one of the steps in the plastic pollution process beginning to circle the planet. It starts with the fracking that produces the natural gas, includes the air pollution from the pellet production process, and then plastic pellets end up in Charleston harbor, in plastic islands in the oceans and plastic fragments falling in the snow.

Apparently Mr. Maguire was right. It's just taken a while and a cheap supply of natural gas to really get the plastic industry off the ground. It's full speed ahead today. More than half of all plastic has been produced in the last 15 years and there are 343 new plastic production or expansion facilities presently in the works in the U.S. With the natural gas glut we have now, new plastic was so cheap last year it competed favorably with recycled plastic (only 9% of all plastic gets recycled). The fossil fuel industry hopes to triple plastic production by 2050 and by then expect plastic to account for 50% of demand growth for fossil fuels. 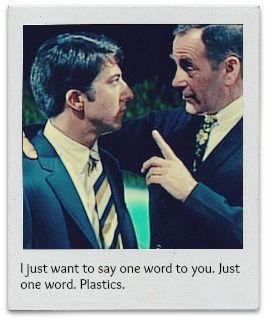 One could hope that reason would sometimes rule decision making. One could hope that people and planet would take priority over profit. But the fossil fuel industry, the most powerful and profitable industry in history, is bound and determined to find an outlet for its investments in the depths of the earth. If wind turbines, solar installations and electric cars threaten their profits, make more plastic. Never mind that their continued production of fossil fuels (and plastic) threatens all life on earth.

Why do I need the tough plastic covering on my new toothbrush I have to cut with a hack saw? Cookies and doughnuts were just fine in a bag or a box. Why must they be packaged in plastic? The virus can live up to 3 days on plastic bags so why can't we continue taking our canvas bags to the grocery store? And why can't communities decide to ban single use plastic?

The answer to these questions is the fossil fuel industry has a powerful lobbying arm and a cheap alternative. The industry has tried to make the case during the pandemic that plastic bags are more hygienic. They have also succeeded in convincing states to pre-empt local communities from banning single use plastics. They succeeded in S.D.. Twice as many states have pre-empted local bans as have instituted sate wide bans on single use plastics. The market drives decisions, not reason, people's needs or the needs of the planet.

If we are to survive corporate control of the economy, with the attendant destruction of the environment, we will need to much more dramatically assert local and individual control. We can ask establishments to skip the plastic packaging and forget the plastic straws. If it costs us a few cents more, so be it.

We can invite people to divest from fossil fuels and those financial institutions that support them. They are taking us straight to a hotter hell than humans have ever known. Heat records are happening every year everywhere. As plastic production increases, so do emissions that heat the planet. Right now, those production emissions are 1% of the planets' total. By 2050, they are projected to be 15% of the total. 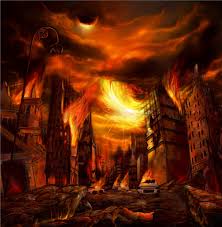 Don't worry about the afterlife. Plastics will help make it hell on earth!
Carl Kline
Posted by Vicky at 9:39 AM