One advantage of  being an elder and mostly retired is you have time for reading. Add a pandemic to it and there is a lot of time for reading. I realized the other day that I was going back and forth between six different books. That's never happened to me before! My usual habit is to read one at a time to the conclusion. Now, I read till the mood strikes me to move on to another. Fiction is always for just-before- bed, to escape the non-fiction and incredibly bad news of the day. With fiction on my mind, sleep might actually happen. 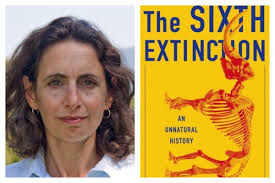 Four of those six books made me start pondering the question of human origins and historical time. It's hard enough recognizing the changes on the planet in my lifetime. It's almost impossible to imagine the world 500 million years ago in the cambrian period; or the earliest reptiles in the carboniferous period, 300 million years in the past. How does one picture something like a million years when sometimes you can't remember what yesterday was like? I'm looking at the chart in The Sixth Extinction by Elizabeth Kolbert. Measuring in millions of years, humans are only the very top thread on the chart.

Winner of the Pulitzer Prize, this book is an example of well researched writing on an important subject with readable prose. Kolbert travels to several sites around the globe to share her experiences with threatened and extinct species, all the while making us reflect on time, and on human origins and destiny.

A second book that made me reflect on similar issues was The Great Unknown by Peg Kingman. A novel, with an archaeologist as a main character, one is confronted with questions about times past but also with questions about timing; period! Why do things happen the way they do; is it really just coincidence, or good fortune, or destiny?

The novel made me reflect on our culture; the busyness to the point of exhaustion; the myopic orientation toward the future; the rampant materialism; the orientation toward doing big and important things; and the unexpected tragedies, like the great depression or a pandemic or climate catastrophe. How do we understand causality, or pure luck, or acts of God? 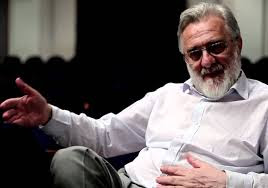 Both of these books made me recall a favorite author, Nikos Kazantzakis. One of his books made me ponder on the question of historical time and my connection to it in a new way. His Saviors of God invites the reader to savor and reverence their ancestry, all the way back to the beginning of time. And for Kazantzakis each of those ancestors is whispering to us through the ages, "climb higher, climb higher".

Elizabeth Colbert tells us something about our ancestors. Apparently, many of us have 1-4% Neanderthal DNA, some thirty thousand years after Neanderthals roamed the earth. Maybe they are whispering "climb higher" in our genetic make-up?

The other two books making me ponder the past have more of a pronounced religious orientation. Matthew Fox believes there is one religious river that feeds many wells. His book of that title, One River, Many Wells, is a study in religious ecumenism. Looking at all of the major religious faiths, he quotes readily from their sacred texts and stories on a series of subjects, including creation. One begins to see in this volume the common historical themes that serve as the foundation for all of the various traditions.

When God Was a Woman has been on my shelf for several years. A pandemic can free some books from their dusty cell. This 1976 title reminds us that there was an ancient time when the feminine was not alien to divinity and gives us some insight into what happened to that understanding. 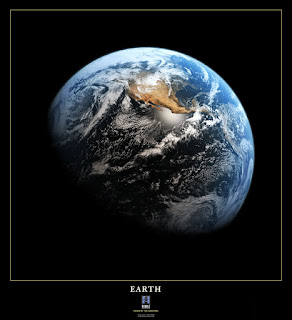 Looking at images from the Hubble telescope can remind us of how small and insignificant we are in the greater order of things. These literary trips into the past can do the same thing. They can temper our tendency toward self importance and encourage some degree of humility. They can stretch our conception of time. (They might even encourage us to live our time fully.) They can encourage our appreciation of our ancient and good planet earth, the natural world we have been given. Maybe a deeper recognition of the past will help us face the increasing challenges of living in harmony with the earth and its creatures. I'm sure that's a hope implicit in The Sixth Extinction of Elizabeth Kolbert.

Family members recently sent pictures of them climbing in the White Mountains. I was reminded that when climbing in those mountains in my younger years, I always felt "grounded." Those mountains were likely created some 100 million years ago. There is something about connecting to the ancient, in person or in literature, that not only humbles, but grounds us as well.

Try it! Touch something from 100 million years ago, if only a piece of literature, that grounds you in time.

Carl Kline
Posted by Vicky at 5:37 AM