It is the season in Jewish tradition when the  Haftarot of Admonition are read - those texts from the prophetic voice that express warning and Divine displeasure with human behavior characterized by injustice, greed, and neglect of the needs of the poor, the orphan and the widow. 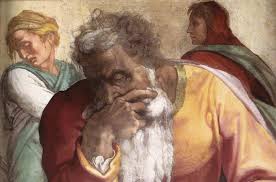 This morning, as our rabbi led us in thinking about the nature of prophecy and the prophet, she posed two different notions of what a prophet might be: one who “hears” the voice of God in an ecstatic state, such that what the prophet speaks are the word of God and not his or her own.  Such a person does not personally own the words given to him or her to speak but attributes them to the Holy One.

A second notion posits that a prophet is one who engages with HaShem -perhaps even wrestles with the Holy One, so that the prophetic word that emerges is a collaborative effort between prophet and HaShem.  Isaiah and Jeremiah, classical prophets, might exemplify the former.  Moses, who interacted and engaged with HaShem as he sought divine inspiration for his leadership might be considered an example of the latter. 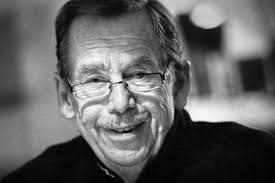 Following her  teaching, our rabbi invited us to think together about who we might recognize as a prophet in our time.  As might be expected, the name of Martin Luther King, Jr. was the first mentioned.  Others such as Vaclav Havel and Nelson Mandela were also lifted up.  Even the often prophetic voice of Bob Dylan made the cut.

What seemed very clear to me as the discussion unfolded is that we seem to always look for the “BIG” voices - the ones that move multitudes with their clear seeing and their vibrantly amplified messages calling for  justice and speaking truth to power.  And yet, as I listened to our rabbi and her rabbi husband speak, I saw even more clearly that the prophetic voice is not always or necessarily the booming one.   Both rabbis embody the prophetic voice as they faithfully draw our attention to the ancient texts that are so pertinent for us today.  They consistently focus our minds and our attention on the call of HaShem to live lives of holiness, committed to justice, to equity for all, and especially for the poor, the homeless, the hungry, those without adequate health care and those most vulnerable to abuses in a systemically racist culture and criminal justice system.  They invite and help us to stand with the prophets of old.

What struck me even more powerfully was that in their faithful commitment to focusing our attention on the sacred texts, our rabbis are in the process of cultivating a “prophetic consciousness” in each one of us in the congregation, empowering each one of us to live prophetic lives in our own spheres of influence.
This is, of course, a much slower and less dramatic way of bringing human consciousness around to the place where it embodies the command to be “a kingdom of priests and a holy nation.”   But it is an inexorable force.

Like the slow and hidden work of the yeast in a beautiful challah,  the steady focus on the prophetic words from the voices from our history shapes and guides our thinking and action in a world that might conclude that the age of prophecy is long gone. 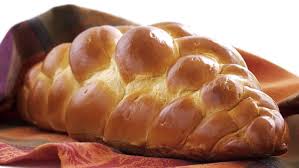 As the day progresses, I find myself wondering how much more quickly the age of “prophetic consciousness” might expand if we each listened with sharper minds and ears to what our rabbis and ministers and imams and priests might be trying to do as they fulfill their own prophetic calling to expose the words of the prophets, inviting us to fill ourselves up with them so that we, too, feel ourselves in that great rushing movement where “justice rolls down like waters and righteousness like an ever flowing stream.”
Vicky Hanjian