The Flag and the Sign to Remind, and a Simple Flower of Hope 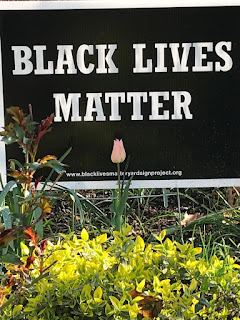 Soft light plays on the rainbow flag that hangs in the porch window. Just beneath the flag is a Black Lives Matter sign, the one we take to demonstrations, the one without a wire stand. The dramatic interplay of color tells of Torah, the Torah of justice, Torat Chayyim/Torah of Life, of letters and parchment, Black fire on White fire, here in reverse. I hear the voice of Pete Seeger (of blessed memory) singing through time a children’s song, “Oh the ink is black, the page is white, together we learn to read and write….” I hadn’t planned to put the flag and the sign together, but it seems so right. Coming home from a demonstration, I set the sign down on the windowsill beneath the flag. It happened to be just the right amount of space and it didn’t seem fitting to put the sign out of sight, even if there is another in the garden, the one whose wire base is set in the warm earth, justice waiting to flower. I had earlier taken a photograph of the sign in the garden, one single pink tulip in front of it bravely rising toward the light, the flag and the sign.

I gazed and reflected upon the flag and the sign on the fourth yahrzeit of the Pulse Nightclub massacre in Orlando, Florida, June 12, 2016. Forty-nine people, mostly LGBTQ people of color, were slaughtered by the gunfire of one so filled with hate he could not see their humanity, nor his own. Forty-nine souls, each one counting and counted, as in the counting of the forty-nine days between Passover and Shavuous, counting days to remind that each one counts. All the more so, to remind that every person counts, that every person is of infinite value and meaning. Why is that so hard for us to understand and so to live? In the confluence of days, in the midst of so much pain, remembering them on their fourth yahrzeit came in the midst of the shiva days for George Floyd, the flag and the sign. And the flower reaches toward the light. 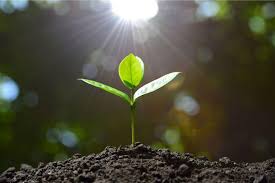 As we nurture flowers in the garden, helping each one to grow and become in its rising toward the light, so the flowering of each person’s light as we help each other to grow and become. It is a simple message conveyed through carefully calibrated language at the beginning of the weekly Torah portion called B’ha’alotcha (Num. 8:1-12:16). Moses is to instruct Aaron regarding the lighting of the menorah in the sanctuary. The common word to light, l’hadlik, is not used. The Torah’s language tells, rather, of much more than the ancient menorah, in your causing the lights to go up/b’ha’alotcha et ha’nerot, the seven lights shall shine toward the [center of] the menorah/el mul p’nei ha’menorah. Causing light to go up is the way of helping the light of another soul to shine, holding the light of our own soul’s caring near enough to encourage the other to rise and become, as in the way of teacher and student. It is the way of lighting Chanukkah candles; one flame held to another until the second ignites, two flames bursting into brightness, each rising together higher than one alone. Helping each other to shine, our light shines together toward the center, toward our common source, toward the Holy One in whose image all are created. 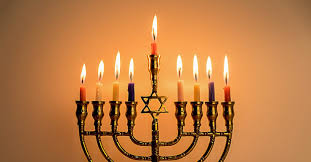 Forbear of all Torah commentators, Rashi asks from eleventh century France why the juxtaposition of lighting the menorah at the beginning of this portion with the bringing of gifts by the princes of each tribe at the end of the preceding portion (Num. 7). Rashi explains that it is God’s way of soothing Aaron as he is told how to enkindle the lights of the menorah, causing light to go up. As the kohen gadol/high priest, neither Aaron nor his priestly tribe was among those bringing gifts for the dedication of the sanctuary. These were the gifts that down to the smallest details were exactly the same from each tribe, no one wanting to outshine another, each seeking to uplift and celebrate the other. Downcast for his absence in this pageantry of equality, Aaron needs reassurance. Concerned for Aaron’s feelings, God tells Aaron to see the importance of his role, to see the importance of causing light to go up, even more precious than the bringing of physical gifts for the sanctuary.

As the physical is impermanent, light is eternal, a reminder of the human soul that is God’s candle in the world. The rabbis teach that the light of the menorah represents the primordial light of creation, the light of the first day that was called into being before the physical sources of light had been created, the sun, the moon, and the stars. That light could not be destroyed by hate and violence, not by the Babylonians nor the Romans. It is the light that is stored up for the future whose coming depends on us, on our turning of swords into plowshares, of enemies into friends, of hate into love. It is the light of peace and wholeness, the light of justice and fairness that will fill the world when we have learned to live together and help each other to grow and become. The instructions are not for Aaron now, but for all of us to become lifters of light. 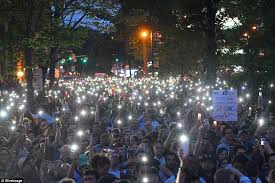 It is hard to imagine such a time, and yet in the way of our coming together in these days perhaps an intimation, hope in the passion for justice rising. It was hard for Moses, too, to imagine such unity. The menorah was to be hammered out of one piece of gold, from its root-stock, to its flower, it is beaten work (Num. 8:4). There were to be three almond blossoms along each branch, flowers rising toward the light, all hammered out of one piece of gold. Seeing Moses’ confusion, God points and says ZEH/this is how to do it. Though challenging enough, it was not the physical challenge of fashioning the menorah from one piece of gold that so confounded Moses. It was the symbolic expression of unity represented by one unbroken piece of gold that offered the greater challenge, the implication of a common source from which all is formed. That remains the symbolic challenge of the menorah, one piece of gold meant to represent unity, all of us joined as branches, each offering of their light back to the common source, the trunk, all as branches on a great tree of light. In a powerful midrash, God shows Moses a vision of that menorah of unity; the Holy One showed him white fire, red fire, black fire, green fire, and from these God made the menorah…; God incised that image upon Moses’ hand, and said to him, ‘go down and make it according to the image on your hand…’ (Torah Sh’laymah, Midrash Tanchuma). 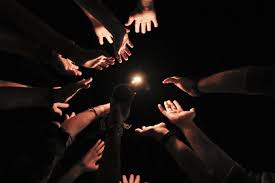 As we look through our fingers at the end of Shabbos toward the dancing light of interwoven wicks that form the Havdalah candle, may we see reflected upon our hands the menorah formed of fire, many hues to remind of each one’s light. As it was for Moses a sign of unity, so for us the menorah lights of a rainbow flag of fiery colors joined as one. Lifting up each other’s light on the menorah of life that is formed from one holy source, may we illumine the path toward the day that is all Shabbos, toward that time of harmony, of peace and justice flowering. So may we make of their memories the blessing of their lives, remembering on their yahrzeit the forty-nine who were killed at the Pulse nightclub, and George Floyd in this week of his shiva. As a blossom placed upon each branch of the menorah, tender, fragile, and beautiful, each of us is needed to raise up the light of another, the flag and the sign to remind, and a simple flower of hope rising toward the light.