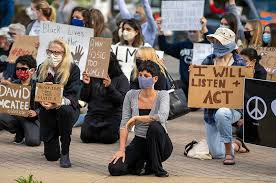 On Monday, my daughter Pickle and I drove down to Five Corners so that we could put our knees on the gritty pavement for eight long minutes. Afterwards, Pickle remarked quietly to me, “My knees hurt.”
The symbolic action still made a physical impression on her, even if it was an easy way to lay our bodies down for justice.
As we made our initial drive, Pickle expressed some concern about our mission. She was aware that protests across the country had become scenes of violence. And she remembered the last time she stood at Five Corners, on the fifth anniversary of the Newtown shootings, when someone driving by shouted expletives at the gathering, the angry words landing right in her eight-year-old face. I explained to her that I would keep her safe, that we were choosing the safest way to put our bodies on the line. 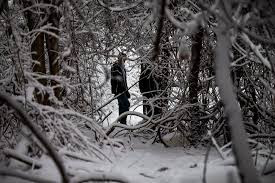 Participating in a demonstration in the midst of a pandemic, after months of social distancing, made me even more aware of my body and the bodies around me. Staying masked and keeping a distance was such an unusual way to gather, but also another way to honor the human body.   Standing out in public with other bodies brings to mind the fragility of our physical bodies. How easily they are injured. How quickly life is taken out of them. Even watching the bodies come and go out of the Cumberland Farms store, I saw the bodies of people I know on this Island who live close to the gritty pavement, or piney floor of the state forest, the homeless of Martha’s Vineyard. More precious bodies, out in public, exposed, vulnerable.

Say his name. George Floyd. Say his name. We say the names of those killed under the shroud of racism to honor them as children of God and to pull back the covers and reveal the racism at work in our society. Say their names. He or she was a father, a mother, a daughter, a son, a brother or a sister. A human being. A sacred body. 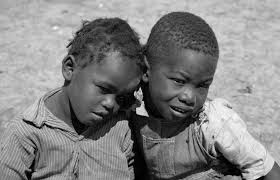 For me, my shock, my outrage, my fear, my grief and my exhaustion at this moment in time, is rooted in the way black and brown bodies have been denigrated and discarded for centuries. Bodies extinguished by blatant racist acts or worn down by the micro-aggressions of systemic racism and white privilege. Black and brown bodies dying at a disproportionate rate even from the coronavirus, reveal other dynamics of racism in our country. At times, I muffle my mouth, and try to just listen and feel what my black and brown siblings are experiencing. I know that I, too, am part of this racist system, shaped by bias, oblivious to how I may come across. Complicit. Sometimes it’s hard to know what to say, and so I act. 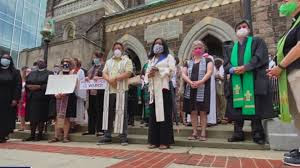 Throughout my life, I have chosen to place my vulnerable body before power, as I was shown by Gandhi and Dr. King, by clergy and moral leaders, and so many others. When words fail to express our feelings or make change, we use our bodies to demonstrate and practice civil disobedience. Here on Martha’s Vineyard there are few opportunities for this form of expression, but I have watched my clergy colleagues across the country engage their bodies in marches and demonstrations and nonviolent civil disobedience. I am grateful to them. I honor them. 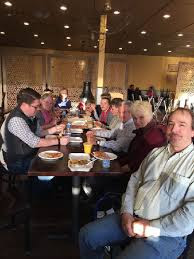 I have been especially attuned to the ministry of the Rev. Ingrid C. A. Rasmussen of Holy Trinity Lutheran Church in Minneapolis, who has turned her church into a mess hall and medic center. And we have all witnessed how the clergy of St. John’s Episcopal Church in Washington, D.C., have been thrust into the center of the conflict. On Monday, after offering hospitality to the demonstrators on their patio, sharing granola bars and juice with them, they were hit by tear gas and rubber bullets. I bow to all the leaders who are emerging in this moment.

I am out of words for now. I don’t know if I have words of wisdom to offer. But as a person of faith, I trust that God is present in this moment and I know that if I want to join Jesus at this time, I need to follow him into the places of pain and vulnerability, the places aching for healing and justice. That is where my Lord is found. I cling to resurrection hope.    For Monday’s demonstration, the youth who organized it asked white people to think about what they would do to confront their privilege from this day forward. In my mind, the poster I raised said, “I will raise my kids to be anti-racist.” But I held another one as well, “I will lead an anti-racist church.”       Won’t you join me?

Guest blogger Rev. Cathlin Baker is pastor of the First Congregational Church of West Tisbury, MA
Her essay first appeared in the Vineyard Gazette and is printed with permission .