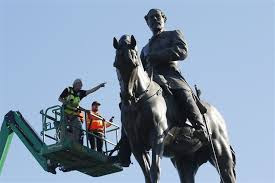 The murder of George Floyd sparked demonstrations around the world and prompted Governor Ralph Northam of the State of Virginia to announce that the statue of General Robert E. Lee, which since 1890 has stood at the head of Monument Avenue in Richmond, Virginia, the capital of the Confederate South, will be taken down, removed, and placed in storage until a new location is determined. That twinning the governor’s action with the global corona virus pandemic presents us with an important opportunity to create a new society through nonviolent social change.
Explaining his action, the governor said that the Lee statue is, “the biggest thing around. It sends a clear message: This is what we value the most.” He went on to say, “That’s not true anymore.” Soon after the governor made his announcement, Richmond Mayor, Levar Stoney, and members of the city council approved removing Confederate monuments standing on city property. In his announcement Mayor Stoney said, “It is time to put an end to the Lost Cause and fully embrace the righteous cause.” In contrast, Republican State Senator Amanda Chase, who is running for governor in 2021, said that the removal of Confederate statues is an “overt effort to erase white history.”
What does it mean to “erase white history?” How can we contribute to “the righteous cause?”  The times demand action. 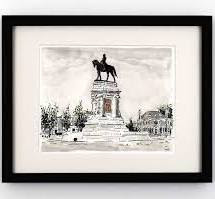 The iconic 21 foot high bronze statue of General Robert E. Lee weighs 12 tons and stands atop a 40 foot granite pedestal. It is surrounded by a grassy circle that is 200 feet in diameter.  Planning for the statue began soon after Lee’s death in October 1870, but it took 20 years to come to fruition. Members of the Lee Monument Association commissioned a lithograph of a painting of Lee by Albert Voick. This lithograph of Lee astride a horse became the basis of the statue, which was created by French sculptor Antonin Mercié. Newspaper accounts indicate 10,000 people helped pull four wagons loaded with pieces of the monument to its present location. The statue was unveiled on May 29, 1890 before a crowd of about 150,000 people--more than the city’s population at the time. It was the largest gathering in the city since the inauguration of Confederate President Jefferson Davis in 1862.
Today there are more than 1,500 public monuments and memorials to the Confederacy, at least 223 of them are in Virginia--more than in any other state. The United Daughters of the Confederacy, formed in 1894, has been described by historians as a leading national organization involved in building monuments and memorials to commemorate the Confederate States of America, the Ku Klux Klan, and white supremacy. The Sons of the Confederacy, formed in 1896, describes the Civil War as “the Second American Revolution,” on its website. It identifies itself as “a historical, patriotic, non-political organization dedicated to ensuring that a true history of the 1861-1865 period is preserved.”
Monuments memorialize. People erect monuments to preserve history and to pay tribute to people who have done honorable things. Monuments tell one story and obscure other stories. They keep our memory of the past alive. They are meant to demonstrate the enduring legitimacy of certain values and cultural ways, and by extension impose those values and ways on the present, thereby shaping hopes for the future. The statue of General Robert E. Lee was created and placed in its present location to serve all of these purposes. 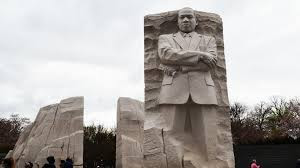 As noted above, both the governor and the mayor are eager to create a new narrative. But the deaths of George Floyd in Minneapolis, and Heather Heyer in Charlottesville, and several other people who have been victims of white racism and violence witness to the truth that change will come only with struggle and sacrifice. The goal of efforts to remove statues that pay tribute to “heroes” of the Confederate States of America is not to “erase white history,” but rather to create a new inclusive narrative that empowers us to move toward a future that fulfills the promise of “liberty and justice for all.” 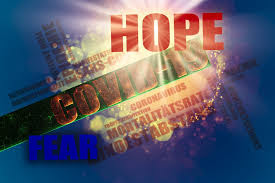 I believe that lessons we can learn from the corona virus pandemic can help us in our work to create this “more perfect union.” Indeed, French intellectual Bruno Latour argues that the corona virus gives us a model for change. The rapid social transmission of this disease reminds us that we are not autonomous individuals motivated only by self-interest, but rather, we are embedded in ecological networks of life. We rely on each other. During the pandemic we are learning also that it is possible to put the entire economic system on hold everywhere in the world. As a result residents in urban centers once shrouded in pollution and smog can once again breathe clean air and see blue skies. While we practice social distancing, we discover that we have the power to decide what is useful, necessary, and important. Thinking globally and acting locally is becoming much more than a catchy slogan. It is a way of life.
Removing monuments that enshrine a racist history from the public square marks a sea change in our social conversation. It shows us what is possible when people come together for a common purpose. Changing consciousness coupled with changes in institutional leadership and community control of public spaces is the foundation for a new commonwealth.
David Hansen