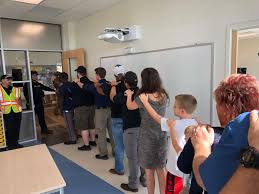 Talking with two friends and future teachers the other day, my understanding was deepened about a new and fearful responsibility they assume. One of them told us how she was in her practice teaching situation with her young charges when one of the children slammed a door, hard. It sounded to her like a gun shot. She confessed she had a moment of utter panic.

Of course, part of the training these days is for just such a situation and a school lockdown. You learn where to go in the room to best protect the children. I learned how the magnet on the door frame of the room we were in, when quickly removed, would lock down our room.

I pondered how we do such an unfortunate job of drilling fear into our children with practice runs in school. In my day, it was getting under the desk to be safe from a nuclear bomb (as if that would help). Now it's closer to home, so we cower in a corner to avoid the disturbed school shooter. 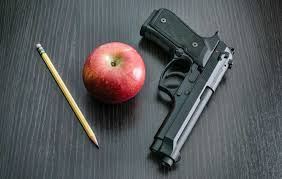 The other future teacher said when she starts teaching she's going to have a gun. I was astonished! This is a seemingly calm, patient, intelligent young woman. She set off a long conversation with questions from her fellow teacher friend like: where would she keep a weapon; how would she insure a child didn't find it and accidentally injure another; what was she teaching the children by arming herself? I told her my concern was that anyone who owns a weapon for "security" purposes, should be prepared physically, mentally, emotionally and spiritually to kill someone. Was she? Had she done the necessary homework? 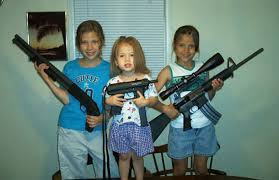 We must be the most fearful society on the planet, as well as the most violent. Three pictures brought this home to me this week. The first was an 11 year old girl with her grandfather, appearing before a legislative committee in Idaho with a loaded AR-15 slung over her shoulder. Her grandfather was there supporting conceal-carry for permitted non residents. Ironically he said, "People live in fear, terrified of that which they do not understand. She's been shooting since she was 5 years old. She got her first deer with this weapon at 9. She carries it responsibly. She knows how not to put her finger on the trigger. We live in fear in a society that is fed fear on a daily basis." He said Bailey was an example of someone who could responsibly handle a gun, and lawmakers should extend that to non-residents.

The second picture was two young boys standing in the Nebraska state capital with assault weapons. One had even dressed the part with a helmet and fatigues. Apparently they were there with their weapons just to prove they could be. This in a state where it's against the law to take a protest sign into that same building.

The third picture was of Tess Thompson Talley, a trophy hunter from Kentucky. She posted a picture of herself standing in front of a rare black giraffe apparently looking and pointing to the heavens in thanksgiving. She remarked, "Prayers for my once in a lifetime dream hunt came true today! Spotted this rare black giraffe bull and stalked him for quite a while." Africa Digest called her a "white american savage." 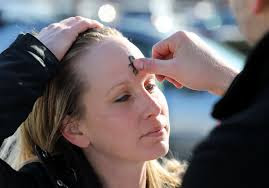 Let's be clear! There are lots of people who don't need guns to feel safe, or powerful. There are those who practice fearlessness. One such event occurred around the world this past week when Christians celebrated Ash Wednesday. This is a ritual where you wear the sign of your own demise on your forehead. You recognize that you have come from dust and you will return there as well. You're no different in essence than any other living being and your destiny will be the same. 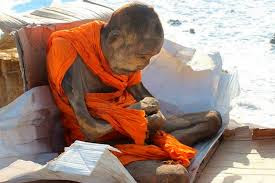 In Buddhism there are monks who meditate on their skeleton, no flesh, just bones. It might be a humbling reality check for all of us. Confronting death, the deepest fear of the human psyche and coming to terms with it, enables one to begin practicing fearlessness in life. And if ritual practice isn't enough, one could take advice from the 1 Letter of John in the New Testament, that "There is no fear in love but perfect love casts out fear." 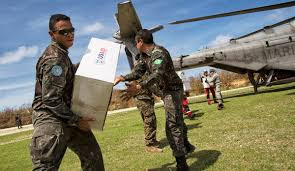 The fearless are all around us. They seldom get press. They confront a loved one on their alcoholism or drug use. They save people from fires and floods. They won't let "difference" limit their neighborliness or compassion. They won't let the depressed despair. They counsel the desperate and suicidal. They teach the seemingly unreachable. They face fire hoses and dogs and beatings in the cause of justice. They sometimes lose their lives in school or church shootings, attempting restraint on the shooter. They risk their lives in international situations of conflict. They accompany human rights workers around the globe in organizations like Peace Brigades International. They serve in the Nonviolent Peace Force to help resolve conflicts with creative nonviolent strategies. They join the UN Peacekeepers to deliver supplies to war torn refugees. 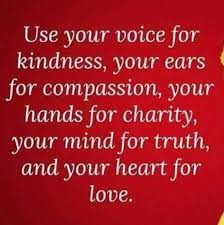 There are those who love life so much that they work through their fears, refusing to place them on another. We are a fearful people. But if we will, we can practice fearlessness. We can hold love and compassion in our hands as our weapons of choice.