To Build Connection in the Places of Our Common Vunerability

As I said goodbye to a visitor, a question was left with me, and so it has lingered. In a voice both perplexed and pained, I was asked, “Why is there such a negative view of Esau in our tradition, so much more negative than the Torah itself would suggest?” Esau, of course, is the brother of Ya’akov, the one from whom Ya’akov wrests both the birthright and the blessing of the firstborn. Long through the shimmerings of time and history, Esau, as Edom, comes to be associated with Rome, fierce oppressor of Jacob’s descendants. As in regard to so much strife in Torah, particularly in B’reishit, beginning with Cain’s killing of Abel as the first murder, much of the interpersonal strife and violence we encounter plays out in the family context, among those who are siblings. The first murder is fratricide, as every killing of one human by another has been ever since. The allusion becomes clear, all humanity are siblings, all children of a common Creator in whose image we are created, whose tears dampen the soil wherever we live in conflict with each other on this earth. 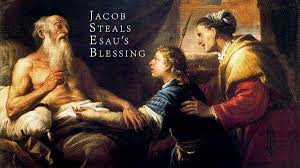 A parent struggling to be lovingly present for each of his children, whether in fact blind near the end of his days or only willfully so, we are told of Isaac’s horror upon realizing that he has blessed his younger son with the blessing meant for the elder. Having returned from the hunt and having prepared a meal for his father, Esau weeps and cries out, the Torah telling of a broken soul, When Esau heard the words of his father, he cried out with an exceedingly loud and bitter cry, and then he said to his father: “Bless me also, O my father!” (Gen. 27:34). Of bitter tears and the cry of a wounded heart, we have already encountered the same pain in the father’s generation, the divide then between Isaac and his brother Yishma’el. As migrants cast out and wandering in the desert, the water carried by Hagar and her son is spent. The forlorn mother places her son in the shade of some desert brush. 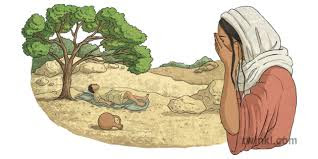 We are told that God heard the voice of the child and that an angel called out to his mother, saying, Do not be afraid, for God has already heard the voice of the child, there where he is/ba’asher hu sham (Gen. 21:17). Drawing on midrash, on the words there where he is, Rashi teaches that a person is to be judged by the deeds they do in the moment, v’lo l’fi mah she’hu atid la’asot/and not according to what they may do in the future. The place of that moment was and remains a place of human vulnerability, and therefore a place that offers the greatest potential for human connection. It is a place that reminds of the times when we are each in greatest need of human connection, times when we are parched in body and soul, times when we each thirst for love and compassion and can recognize such need in the other. 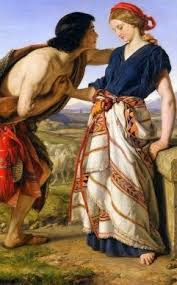 Holding up a mirror in which to see ourselves, the Torah now brings us to the weekly Torah portion called Vayetze (Gen. 28:10-32:3), along with Yaakov, to encounter Lavan, uncle of Jacob. Having already witnessed human vulnerability, we are reminded of our own as we come to see it in those we meet in the turning of Torah. Yaakov has fled his brother’s anger, arriving in Charan, there among his mother’s family falling in love at first encounter with Rachel.

He agrees to work for his uncle for seven years in order to marry Rachel. In the familiar story, on the wedding night Lavan presents the undoubtedly well-veiled bride, who in the morning Yaakov discovers is the elder sister, Leah. Yaakov confronts Lavan and says, What have you done to me…? Why have you deceived me…? Responding to the one who has also deceived, Lavan’s words drip with irony, It is not done in our place to give the younger before the elder. We wonder how Lavan’s words touch Yaakov, whether they do in the moment of his own vulnerability, when he is the one deceived. The uncle’s words become a mirror in which Yaakov can see himself if he is willing to look, to gaze and reflect in all of his pain and vulnerability. Lavan’s words can also become a mirror for us if we are willing to look, to bravely accept an opportunity in which to gaze at aspects of ourselves that we may prefer not to see.

Through the years, Yaakov has grown abundantly, with his two wives, both Leah and Rachel, and with their handmaids, Bilhah and Zilpah, becoming the father of eleven children, rich in herds and flocks. Twenty years having passed, he now seeks to return home to his family in Canaan. Well aware of Lavan’s jealousy and that of Lavan’s sons, Yaakov sets out a plan, coordinated with his wives in defiance of their father, to secretly flee. When the time comes and the great procession makes its way into the unknown, distance is put between them and the sure to follow retinue of Lavan. Eventually the distance is bridged, if not the hearts of fleer and pursuer, an encounter that is hard to imagine, wondering who would speak first and what to say to the other. 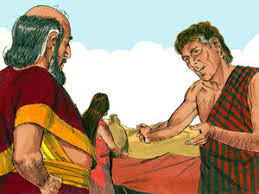 The Torah sets the stage for us, telling us of human vulnerability as the place of the encounter, a place beyond time and space, a place carried in each of our hearts. We are simply told, And Yaakov stole the heart of Lavan the Aramean in that he did not tell him, because he fled (Gen. 31:20). That is exactly what Lavan says just a few verses later, you have robbed my heart…; and you did not permit me to kiss my sons and daughters…! As with Yishma’el earlier, and then with Esav, the Torah brings us to a place of human encounter, holding before us emotions that we can understand because they are our own. In the context of Jewish law, beginning in the Talmud ((Tractate Chulin 94a), Jacob is wrong to deceive Lavan, however much we may understand his actions. Such deception is called g'neivat da'at/stealing of mind, accomplished when outer actions and spoken words belie inner feeling and intent. We are meant to ask, to wonder, what else might he have done; how differently might he have responded to the situation; how might he have directly engaged with Lavan to open the possibility of understanding and a different way of departure?

As we consider why such a negative view of Esau has developed in the tradition, so too with Lavan. We can surely draw negative inferences about both of them from the Torah text, but not at all to the extent of evil later ascribed to them. There is surely as much fault to find with Yaakov and others of our ancestors. My visitor’s question lingers, so why such a negative view as it plays out through time? Perhaps it emerges from our own vulnerability and pain, from our own experience as a people. That we might learn to break such destructive dynamics, Torah challenges us to think of our own lives and their contexts, of our own experiences with people. We are meant to ask what we might do to help foster reconciliation and the possibility of wholeness in all the varied ways of our own relationships with people as they occur in the living of our lives. The challenge for us then becomes how to avoid weaving new enmities and enemies from what are often scant threads of conflict as encountered in the texts of our lives. 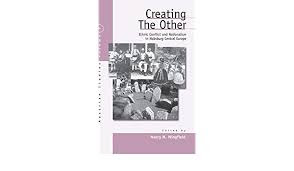 The Torah is meant to be a context in which to wrestle with life and its encounters, and so we are meant to wrestle here, as indeed Jacob will soon do. As we encounter people at their most vulnerable, however much they may seem to us to be “other,” we are able to see ourselves reflected in their pain. The negative portrayal of the other emerges, perhaps, through our own inability to look at what is most difficult to behold in our selves. Torah offers a context in which to wrestle, a place in which to ask hard questions of our selves and of each other as we seek to understand the Esaus and Lavans whom we encounter along the way of our lives. We come to ask how and why we create enemies, why we foster images of the other that allow us to continue seeing them as an enemy. 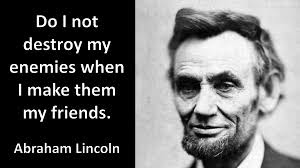 While my visitor’s question still lingers, in considering the negative images ascribed to others, may we bravely seek to build connection in the places of our common vulnerability. From the place of shared human pain, may we come to know the heart that would be shattered if that which was most precious to it was stolen, and in protecting from such sorrow may know shared human joy. So the rabbis asked, who is a hero of heroes/aizehu gibor she’b’giborim? And they answered, one who makes of their enemy their friend (Avot d’Rabbi Natan 23).