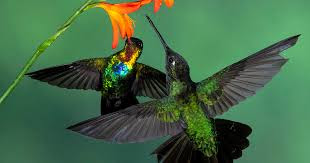 Brian Doyle, in "Joyas Voladoras," asks us to consider the hummingbird. For the most part, Doyle wants us to consider the size of the hummingbird heart, about the same size as a child's fingernail or an eraser on a pencil. That little heart beats about ten times a second. That rapidity is understandable given the enormous energy needed to do the amazing aerodynamics the hummingbird displays. It can fly backwards, dive at sixty miles an hour, fly five hundred miles without resting, visit a thousand flowers a day.  But that little heart can only go so long before it burns itself out. The hummingbird lifespan is maybe two years.
Joyas Voladoras (flying jewels) is the name given hummingbirds by the first white explorers in the Americas.  The Americas is their only habitat, all three hundred plus species of them. Once, in Mexico, sitting in the open-air veranda of a Mexican restaurant, I saw more flying jewels in that one spot than I had seen in my whole life. There were feeders hanging from the roof sheltering us from the sun and rain and dozens of hummingbirds were darting in and out. Their music was audible and their visual background to an excellent meal was extraordinary.Hummingbirds are the world's second largest family of birds with an estimated 338 species. Few in the world are aware that thirty-four species, or nearly ten per cent, are threatened with extinction. 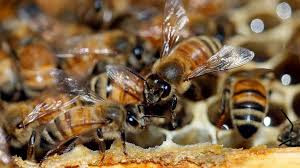 Honey bees work hard. Their wings can beat about 200 times per second and they can fly fifteen miles an hour as they visit fifty to a hundred flowers on a trip. Bees have a heart in an open circulatory system that pumps blood from the back of the bee toward the front. There are no veins or arteries. All its organs float in a combination of lymph and blood.

We're becoming more aware of the threat to bees and other pollinators from several factors. Industrial agriculture is one with it's heavy reliance on insecticides. Other factors are destruction of habitat, parasites and pathogens, lack of forage and climate change. Fortunately, some are working hard to improve the honeybee population. 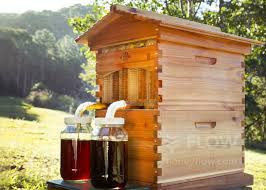 The "Flow Hive" is a man made bee house that allows honey to be collected without disturbing the bees. Australian beekeepers Cedar and Stuart Anderson developed the hive and have sent more than fifty thousand of them to beekeepers around the globe. It's estimated they have helped increase the honeybee population worldwide by ten percent. All of the profits of the sale of the flow hive go into protecting pollinator habitat in Australia and the U.S. It's amazing what this father and son team have done, just the two of them, to respond to a critical need. 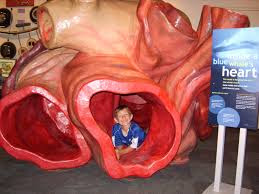 Brian Doyle tells us the blue whale has the largest heart of all earth's creatures, about the size of a small car.  A child could walk around inside of it, with valves the size of swinging doors in a saloon and four rooms to explore. You need a big heart to drive a creature a hundred feet long, about the length of three school buses.  The blue whale weighs more than seven tons, as much as four tons at birth. (I always thought I was twelve pounds at birth till I told my mother and she laughed so hard she cried). According to Doyle, we don't know a lot about blue whales except that they are in all the world's oceans, usually travel in pairs and they make exceptional sounds.

Human hearts beat somewhere between sixty and a hundred times a minute, Depending on your life span, it may beat somewhere between three and four billion times. During a recent cardiogram, I watched my own heart beat and listened to it working hard to keep my blood flowing. It was an awesome and humbling experience. How amazing an instrument we have all been given, How amazing an instrument in the blue whale, the honeybee, the hummingbird, the human being.

There's a long tradition in the Christian faith affirming each and every part of creation as a gift from God. The Genesis story repeats again and again, in refrain, that each and every thing God created was "good." That includes the hummingbird, the honeybee, the blue whale, the human being. Each reflects God's glory and the world is poorer if any one creature is lost. 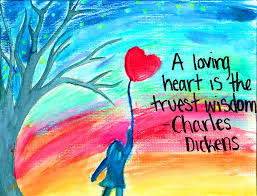 As the power brokers and profiteers of the planet dim God's glory in the destruction of God's good creation, let those feeding the hummingbirds, creating hives for the honeybee and recording the sounds of the blue whale, continue their good work. The human heart, holding all that is in loving relationship, fulfills its destiny. It is the preeminent way to give glory to the Creator.