It is midweek as I write, still reflecting on Sunday morning’s service of worship.  It was the first Sunday in Advent, the beginning of the ancient rituals of anticipating the renewal and rebirth that comes with the celebration of the anniversary of the birth of Jesus.  The service was abundant with the full range of human emotion and aspiration. 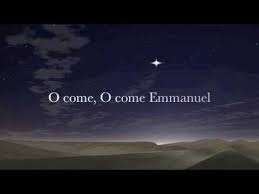 The Pietro Yon organ prelude set the tone with its steady bass beats, like ever advancing footsteps under the clear high notes of “O Come, O Come Emmanuel” - - evoking the image of an ever advancing movement toward justice and peace.

The diverse congregation gathered.   Children to be baptized;  a brand new nonagenarian celebrating her 90th birthday; the deacons and church school teachers a mix of skin colors; LGBTQ members fully embraced; a terrified family whose mentally compromised son is among the missing in New York City; an equally terrified and grieving woman whose husband is showing signs of dementia; a young man who cares for a sister who has had a debilitating stroke.

There was the chaos of young children wiggling, struggling to be free of parental constraints, vocalizing lustily as the baptism unfolded.  All this playing out against the ordered and measured background of an incredible  solo offering of  Handel’s “Comfort Ye, My People”, framing perhaps a dozen children gathered with the pastor around the font for the blessing of the baptismal water.

Three sets of parents, three children, three sets of godparents, one of whom is a Jewish father faithfully bringing his own sons to Jewish services each week in preparation for their  being called to the Torah,  all vowing to resist the forces of evil in the world, to work for justice against oppression and to raise these young souls in the paths of righteousness - the congregation promising to support them all.

The prayers of the people brought forth the joys and concerns of the congregation to be offered to The Holy One, to be cared for and ministered to by the community gathered. 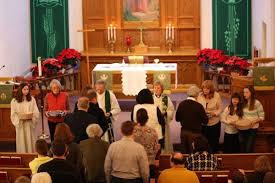 An invitation was given to meet one another around an open table for communion to renew and refresh the memory of the life and teachings of Jesus, to renew together the commitment to life in community based on the hope for a new age when “justice shall roll down like waters and righteousness like an ever flowing stream.”

And then the “bookend” as the congregation hummed together “O Come, O Come Emmanuel” and the pastor gave the benediction and sending forth. 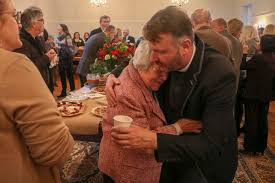 As people moved toward the coffee hour, small knots of human-kindness gathered around the young man who has been caring for his sister,  offering loving support in the form of visits and homemade soups; around the woman whose grief at her husband’s decline left her without words, but welcoming the solid embrace of support around her.  The coffee hour simply continued the worship in another room, under another guise, as individuals connected with each other, as strangers were welcomed and fed, as calendars were produced and appointments made to carry the caring, the feeding, the work of justice out into the world.

The service was a swirl of chaos and order,  rejoicing and pain,  sorrow and hope, all playing out in the midst of an extravagant hospitality that welcomes every part of our humanness into the sacred precincts of worship. 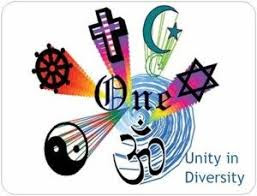 As I have continued to reflect on just what exactly happened during that  brief couple of hours I have come to see that it was a momentary peek into the reign of The Holy One, the divine unity for which we yearn in our immense and often challenging diversity.  We call it by so many names - The Second Coming, The Kingdom of God, the coming of the Messiah - - that time when every tear shall be dried, every injustice set right, every broken heart healed.

At the beginning of the service, we lighted the first of the four candles in the Advent wreath and claimed it as a symbol of hope.  And then, for a brief space in time we entered into the dynamic unfolding of “the kingdom” in our midst - - shared in a glimpse of what it might look like if we each simply do what is required of us - to “do justice, to love mercy and kindness, to walk humbly with our God.” 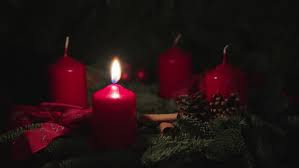 The  sacred texts affirm that the kingdom is within us and among us, moving inexorably, with slow and steady footsteps toward fulfillment.  This is the hope of Advent.  There is great power in lighting that one little candle.

Vicky Hanjian
Posted by Vicky at 10:30 AM