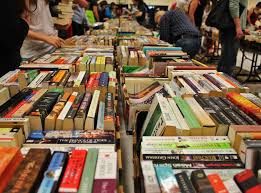 As you read this, the library has had their semi-annual book sale. There were 200 boxes unpacked on Tuesday morning and I'm sure there were plenty of books left Sunday afternoon when you could get them for $2 a bag. I went three times, filling five canvas bags.    I've been complaining for months about how we need to downsize. There are enough books in our house to start a bookstore. In years past, we've had book giveaways. We invite folks for refreshments and books. The books are arranged attractively on tables. No one is allowed to leave the house with empty hands. If my goal is downsizing, then the means to get there is giveaways and curing my addiction at book sales. That's easier said than done. In my case, the means are not always in harmony with the end one seeks.
In the summer of 1959, a friend and I hitchhiked from Aberdeen, S.D. to New Orleans, LA. We had been told that if we showed up at the office of the Scandinavian Shipping Lines in New Orleans, we could get jobs working on cargo ships for the summer. They didn't tell us we couldn't work on the same boat when we first contacted them. My friend left on an oiler bound for Venezuela. I left on a banana boat headed for Honduras.

Honduras was what was called a "banana republic." Bananas were the economic lifeblood of the country. United Fruit Company owned the plantations and was the political and economic power in the country. In those days it appeared to me that most of the economic activity in La Ceiba, where we docked for bananas, was centered in the harbor and the banana industry. Shoe shine boys appeared on the docks as soon as the boats arrived, prepared to shine your shoes or sell their sister. Almost every street had an armed soldier on patrol and the bars did a brisk business with banana boat crews. Poverty was rife and most work seemed to consist of tending and hauling bananas.
That early experience has led me to try and understand better the way corporations can exploit countries to the detriment of all of their citizens. Honduras was poor and there was no way a small farmer was going to be able to grow bananas for export. The land and business was owned and operated by a foreign multinational with political clout.   Add to this history the political and military influence our country has exerted there, it's no wonder the Honduran people are fleeing in droves. The overthrow of an elected President in 2009 in a military coup drew a weak response from Washington and has insured a corrupt, even criminal administration, in power.   In short, if you want people to stay in their own country and not approach the U.S. border as migrants, exploitation and violence in their home country needs to end. 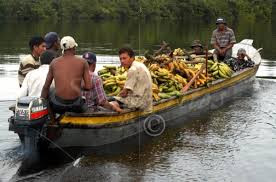 The means to  the  end of avoiding border wars is economic and political freedom and stability at home.

It appears there is bipartisan support against the decision of the President to hastily withdraw U.S. troops from Syria. On the one hand, I couldn't agree more with the desire to bring the troops home from these pervasive and seemingly permanent deployments all over the globe. The end goal is a worthy one. But the means is in question. Shouldn't such foreign policy questions be a matter of consultation, where all of the ramifications are carefully considered? Apparently there was little consultation with anyone, including the military and Congress, certainly not with the allies on the ground, the Kurds. The means this President uses to reach his ends are increasingly autocratic and questionable. This is typical of authoritarian thinkers, who can't be bothered with the interplay of various opinions, data and possible outcomes.

The President might argue the ends justify any means necessary. Others have made the same argument. 45 wouldn't be alone. But if one looks at the historical record, one discovers that it leaves much to be desired. Seeking the end of racial purity left millions dead in gas chambers and concentration camps. Believing one has the exclusive ownership of religious righteousness left whole continents of people designated as savages.

Ends and means must be in harmony. In fact, Gandhi is likely right when he says that, “For me it is enough to know the means. Means and end are convertible terms in my philosophy of life. We have always control over the means but not over the end. I feel that our progress towards the goal will be in exact proportion to the purity of our means. They say ‘means are after all means’. I would say ‘means are after all everything’. As the means so the end.”

It's obvious that if we plant a weed we won't get a rose. It should also be obvious we reap what we sow. We make a serious error, if we fail to see the moral connections and interrelationships between the ends and the means. Great crimes and grievous mistakes can follow. Gandhi said, “The means may be likened to a seed, the end to a tree; and there is just the same inviolable connection between the means and the end as there is between the seed and the tree.” 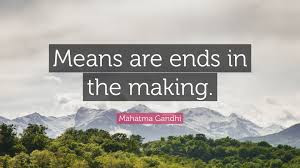 Carl Kline
Posted by Vicky at 8:14 AM