It was a rare gathering, one in which vulnerability was on full display. Walls fell away and defensive fortifications crumbled, all of the ways we use to separate ourselves from each other by closing off what is hardest to share in being who we are. There were tears and outbursts of passion. So too did compassion flow as people met in the open camp of true encounter. There were interruptions, as when a speaker used pronouns that excluded some among us, a lovingly firm challenge calling the speaker to pause and consider. And so the speaker did, setting at ease the one who had taken a risk.

Race and racism became real as lived experience, challenge felt by the most open of those whose whiteness brings privilege, if even in spite of ourselves, yet to acknowledge. There were shallow assumptions of Christians in regard to Israel, failure to understand the deep roots of anti-Semitism, Jews challenged to convey the immense complexity of our historical fears and why. And among us all, there were microcosms of identities within identities.

There were times when those most alike met as a caucus, Ashkenazi Jews meeting separately from Mizrachi and S’fardi Jews, Christians of color meeting separately from white Christians. It felt awkward, painful, to so separate, and yet to strive within our own microcosms to break down the walls we carry within ourselves just a little more by looking most honestly and freely at who we are.

It was a three-day conference under the organizational umbrella of “Faith in Action.” The organizing rubric of the gathering was, “Anti-Semitism, Racism, and White Supremacy.” From the beginning we were challenged to bring all of ourselves into the open camp, to truly share who we are. In so sharing so we could dare to tread upon the common ground, to know the love that joins us, even as we walked gingerly among the minefields. We gathered to the singing of an old spiritual, sung from deep within the soul of a people, all of us sharing, trying to feel what it means, to grasp the intimations of its meaning beyond the words, “Before I’ll be a slave I’ll be buried in my grave, and go home to my Lord and be free….” How to hold the fear of a black mother and father among us for their young son growing up to be a black man in America?

How to hold the courage of a young trans person only recently become in the world who they always knew they were within? It was their courage in quivering voice that challenged the one who spoke with pronouns that denied this young person’s presence. How to hold the brave awkwardness of a white Christian man trying to figure out his place in all the swirling of identities, amid all the sharings of what it is to be of a minority of one sort or another. How to hold and honor the depth of not knowing felt by most of the non-Jewish participants who listened as Jews discussed in a fish-bowl setting the ways of our relationship and struggles with Israel and each other? 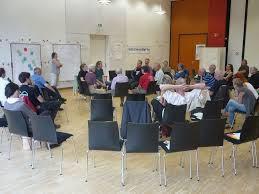 How to hold the tender truths of who we are among ourselves as Jews? We shared of our fears in the face of resurgent anti-Semitism, and of the challenge in discussing Israel even, especially, among ourselves. As Jews shared in that fishbowl setting, there was something poignant and tender in a common thread of attachment to Israel, a thread so frayed for all the torment in the nature of our relationship to what is today, and yet a thread of hope that joins us to each other in our struggles and in our yearning. As walls fell away, trust emerged, vulnerabilities shared in the open space of our gathering. 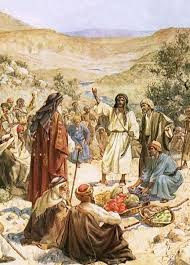 It is a powerful teaching that pulsates just beneath the surface of the weekly Torah portion Sh’lach L’cha (Numbers 13:1-15:41). The words mean send forth. Moses calls on leaders from each of the tribes to go ahead of the people to scout out the land. All but two, Calev and Y’hoshua, return with a gloomy report, warning the people that giants live in the land and there is no way for us to enter. As the people weep and plead for a leader to take them back to Egypt and the chains of slavery, the scouts tell of the giants in the land and then say, we were in our own eyes as grasshoppers/va’n’hi b’eyneynu k’chagavim, and so we were in their eyes. It becomes a powerful teaching about identity. How do we see ourselves, and how does our self-perception influence how others see us? Should it matter to us how others see us? 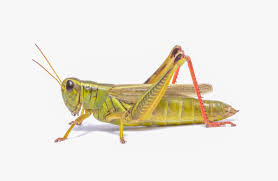 With an ironic twist, the Torah teaches of strength found in vulnerability. On the surface, the narrative is about a people’s desert journey. In reading Torah, it is always important, though, to remember that the sacred narrative is not primarily about them and then, but about us and now.

So does the Toldos Ya’akov Yosef, an early Chassdic leader, teach of Moses’ call for scouts to go forth to search out the land. It is not about an external search says the Toldos, rather, dayka la’tur et atz’m’cha/it is surely to search out yourself. Moses tells the scouts to see what the cities are like in the land to which they go, whether the people live in open or in fortified places. The great Torah commentator Rashi teaches of this verse’s import, if they dwell in open cities they are strong, and if they dwell in walled cities they are weak. 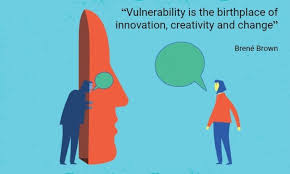 Strength does not come from walls, from closing ourselves off from each other. As the Toldos Ya’akov Yosef guides us, we needn’t read the text as too often read, as simply about a long ago military matter, the gauging of an enemy’s strength. It is about us and about where true strength is to be found.

As walls fall away and we come out into the open space of shared humanity, our vulnerabilities revealed for all to see, the gift of new opportunity emerges. Acknowledging that sometimes we feel like grasshoppers so easily crushed, in sharing of both fear and pride a new strength emerges. So may we learn to share, bravely coming out into the open space of encounter, discovering ourselves in the process of discovering each other.