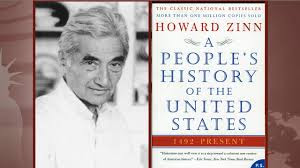 I have been re-reading Howard Zinn’s, A People’s History of the United States, in which he recounts “fugitive moments of compassion” that give us hope and remind us that the future need not be defined by history’s “solid centuries of warfare.” The admittedly checkered history of organized labor has played a vital role in shaping these “fugitive moments” and continues to do so. Organized labor helped our nation enact child labor laws, establish the eight hour work day, strengthen workplace safety and bring about other changes that have improved the lives of all of us. It is important that we remember this history. 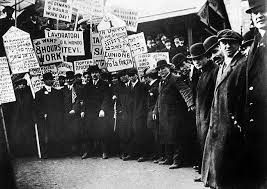 In Chapter Ten, Zinn shares stories of those years in the nineteenth century when trade unions were forming. Tellingly this chapter is entitled: “The Other Civil War.” Here we learn that in 1835 there were fifty different trade unions in Philadelphia. These unions formed a solid front and successfully fought for a ten hour day. But, Zinn reports, by 1844 antagonisms developed between Irish Catholic weavers and native-born Protestant skilled workers over issues of religion. Nativist, anti-immigrant rioters destroyed the weavers’ neighborhoods. Unions divided and soon party politics and religion replaced class conflict, “creating the illusion of a society lacking in class conflict.” “In reality,” Zinn writes, “the class conflicts of nineteenth century America were as fierce as any known to the industrial world.”
Class consciousness was displaced in part by religious conflict and then overwhelmed by the Civil War. But, Zinn points out, there were strikes “all over the country during the war.” He contends that in response to this situation, federal, state and local governments enacted laws and regulations that benefited commerce, businesses and landlords. Then, in the 1870s, an economic crisis devastated the nation. Workers and the unemployed took to the streets. In the centennial year of 1876, the Workingmen’s Party in Illinois wrote a new Declaration of Independence. The following year, in the depths of the Depression, the Great Railroad Strike began. It was, in Zinn’s words, a strike that “shook the nation as no labor conflict in its history had done.” Zinn ends his account of this strike on a somber note: “Blacks learned they did not have enough strength to make real the promise of equality . . . working people learned they were not united enough, not powerful enough, to defeat the combination of private capital and government power.” Ending on a more hopeful note he adds: “But there was more to come.”
Zinn’s book is worth re-reading, or reading for the first time if you have not read it, because it teaches us that while going into the voting booth is important, we must not forget or under estimate “the enormous capacity of apparently helpless people to resist . . .  to demand change.” Each of us can do our part. 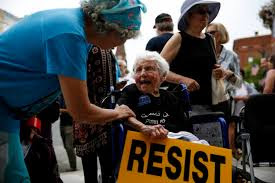 Individually and together we create new expressions of what is possible in the places where we live and work. Joining demonstrations, marches, and boycotts are ways of strengthening our democracy. Writing letters, visiting the offices of our elected representatives, and demanding action on issues like banning the sale of assault weapons are important actions. We can work with our neighbors to transform our communities, make our schools safer, and protect our environment. The lesson to be learned from A People's History, is that each and every one of us can help create our own “fugitive moments of grace” by acting on our values in concert with others. Taking such action is both validating and satisfying. And, importantly, it is our way of showing future generations that we share a commitment to leave for them a culture of sharing and respect for human dignity and for the dignity of the earth.
Rev. David Hansen
Posted by Vicky at 8:44 AM