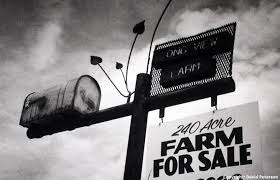 During the farm crisis of the 1980's, there was a steady stream of students in my campus ministry office, looking for someone to listen to the troubles on the farm. I remember one young man describing the tension whenever he went home. His mother and siblings were walking carefully and talking quietly because his father was hitting the bottle big time. The student had found half empty liquor bottles hidden in several places in the barn.

On another occasion a student wanted to explore what an alternative future for him might look like. It was becoming obvious that his future was not in farming. The family homestead of several generations was about to go under. There wouldn't be a farming operation for him to take over. You could see the grief of his forebears in his eyes. 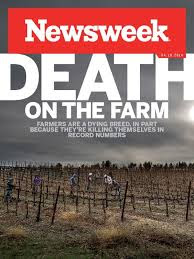 Farmer suicides are back on the front pages. Statistics are being debated, as comprehensive studies are not available, but some suggest the suicide rate of farmers in this country is higher than for veterans, and we all know suicide rates among veterans are extreme. The latest statistics are 20.6 veteran suicides per day, including active duty troops and national guard.

Net farm income has declined by 50% since 2013. Median farm income for 2019 is forecast at -$1,449. You can only go so many years where the cost of production is more than the income from the product before it's bankruptcy or, increasingly, suicide. Besides, that 2019 projection was likely before we understood the continuing consequences of the trade war with China. Soybeans have already taken a nose dive and can likely drop further with the increased tariffs. One wonders how farm state Republicans like our own can stay so muted about what's happening to their major constituents, as a clueless President strives to run the business of trade like his personal real estate investment. It seems this President is at war with everyone, either in a war of words, a trade war, a sanctions war, or, God forbid, a new hot war with Iran.

If all that wasn't bad enough, we have an administration hell bent on doing everything it can to increase the climate crisis while farm families are underwater. The future farming climate is clear, as we hit 415 ppm of carbon dioxide in the atmosphere for the first time in human history; hotter and wetter. That's not very good news to agricultural workers in the Midwest, already waiting on flooded fields to plant their crops. Now, as I write this, we're looking at five more straight days of rain. 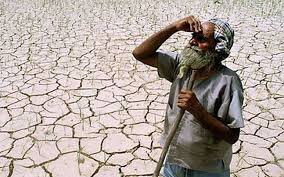 Actually, farming as we know it, is not a life sustaining occupation anywhere anymore. The suicide rate among farmers is a global problem. In India, since 1995, 270,000 farmers have taken their lives. Many attribute this extraordinary number to the adoption of modern agricultural practices, where one has to buy seed, and fertilizers and pesticides and herbicides and equipment, year after year, going into larger and larger debt to moneylenders. Instead of traditional practices of saving seed and using more organic methods for regeneration of the soil, and plowing with the bullock, farmers line up at the Monsanto store and fill the till. 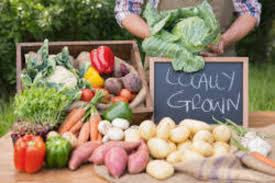 It doesn't have to be this way! The growth of farmers markets in this country is one example of a return to simpler days and healthier ways of being. Here is farm food going right to the dinner table. You don't have to have a huge operation with all the attendant inputs to grow food fit for human consumption and to provide an income. You don't have to "feed the world" or buy up another section. We can move in the direction of smaller operations and more sustainable livelihoods. There are organizations all over the country prepared to help those with a desire to live on the land and work with it, to do farming in a sustainable way.

One such organization in our own backyard is Dakota Rural Action. The DRA mission statement reads, "Dakota Rural Action is a grassroots, family agriculture and conservation group that organizes South Dakotans to protect our family farmers and ranchers, natural resources and unique way of life." As important, is their mission statement for rural vitality. "To lead South Dakota citizens toward a knowledgeable understanding of the relationship between agriculture and the environment; supporting and promoting agricultural systems that protect our air quality, water quality, public health and socio-economics; and sustaining vibrant communities for future generations." 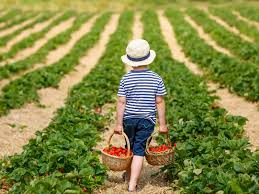 We are failing our family farmers. We need to wake up and recognize our food doesn't come from the grocery store. It comes from seeds someone plants in healthy soil that needs to be watered well, needs sunshine to grow and harvest.

Carl Kline
Posted by Vicky at 9:37 AM