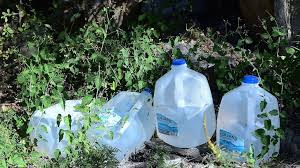 In January of this year, four women were arrested in Arizona for leaving water in the desert for migrants, They were aware of 155 deaths in their area since 2001. They have been charged with misdemeanors and face fines and up to six months in jail. They are members of a faith based group called "No More Deaths." They traveled into the Cabeza Prieta Wildlife Refuge to leave water and food for those attempting to cross this 50 mile wide border with Mexico. They are well aware, as are others in their organization, that around 3,000 remains have been found in border desert areas since the year 2000.

There are more serious charges in the case of Scott Warren. Scott is also a member of the same group, "No More Deaths," and teaches at a local community college. He is charged with two counts of harboring and one count of conspiracy. The charges could result in as much as 20 years in prison. His crime was giving food, drink and a place to stay to two migrants, and according to government prosecutors, "conspiring" with others to help illegal immigrants. The case is being watched closely by humanitarian aid groups and Christians who take Matthew 25:40ff. seriously. 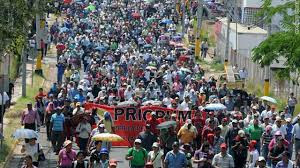 In the meantime, Honduras, the murder capital of the world, from which many are fleeing toward the U.S., is in turmoil. As I write this, doctors and teachers are on strike. An attempt to move toward privatizing education and health care has been tabled for the moment to try and quell the outcry, but budget cuts in both medicine and education have already done significant damage. The unpopular Honduran President is using the military with tear gas and live bullets to disperse the crowds of protestors.

Thanks to Hilary Clinton and others, the previously elected President of Honduras was deposed by a military coup and sent out of the country in his pajamas in 2009. Since then, the murders and corruption have escalated, as well as those fleeing the country for the U.S.. The present President, Hernandez, is our number one ally in Central America, even though he has siphoned off government money for his own political purposes, has dismal approval ratings, and been a target of drug trafficking by our own intelligence agencies.

His younger brother was arrested last year and investigated for trafficking tons of cocaine into the U.S. from 2004 to 2016; but there is no evidence charges were brought nor that the investigation still continues. President Hernandez released a statement saying he enjoys a good relationship with the DEA. 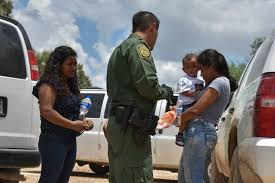 The response of our President to the situation at the border is well known: separating families, detaining children in cages, building walls and wire, threatening and bullying anyone he sees as responsible. So the latest Presidential proclamations are that detained children will not have access to legal aid, recreation, or education. And Mexico faces rising tariffs on Monday, if they don't take stronger measures to stop the migrants.

Some sections of the response from the President of Mexico, Andres Manuel Lopez Obrador, are following.

"I am aware of your latest position in relation to Mexico. In advance, I express to you that I do not want confrontation. The peoples and nations that we represent deserve that, in the face of any conflict in our relations, no matter how serious, we resort to dialogue and act with prudence and responsibility.

Human beings do not abandon their homes for pleasure but out of necessity. That is why, from the beginning of my government, I proposed opting for development, cooperation and assistance to the Central American countries for productive investments to create jobs and resolve this painful issue in depth.

President Trump, social problems are not solved by tariffs or coercive measures. Why the overnight conversion of the country that is the brother of the world’s migrant into a ghetto, where the migrant is stigmatized, mistreated, persecuted, expelled and justice is extinguished for those who seek with effort and work to live free from misery? The Statue of Liberty is not an empty symbol.

With all due respect, although you absolutely have the right to say so, “America first” is a fallacy because until the end of time, even over national borders, universal justice and fraternity will prevail. Specifically, Citizen President, propose to deepen the dialogue, seek fundamental alternatives to the migration problem." 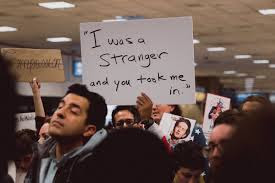 The problem is not a wall or no wall, a tariff or no tariff. The fundamental problem begins at home, in our country and others, where we have trouble mobilizing the instructions of Jesus into social structures, where the needs of the hungry, thirsty and naked are met. I always thought Jesus was pretty clear! When we feed the hungry, give drink to the thirsty, clothes to the naked, we are doing it to him. That's what he said! I also thought the Bible was pretty clear! There are at least 22 admonitions to welcome the stranger. Especially if one's country is at least partly responsible for their flight.

It appears these days that America will be made great again by putting Jesus and followers on the scaffold, a fitting symbol for the struggle between human empire and God's Kingdom.

Carl Kline
Posted by Vicky at 4:06 AM