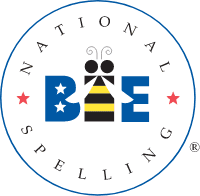 I always look forward to this time of year because of my favorite sporting activity. No, it's not the NBA finals nor the competition for the Stanley Cup. And although tennis is probably my first love it's not even the French Open. It's the Scripps Spelling Bee!

Now I realize that a lot of folks wouldn't consider competitive spelling a "sporting" event. But for me it has all the essential characteristics, including the fact that you always find it on ESPN.  This is actually a three day event. There were 562 young people under the age of 15 who participated this year from all over the U.S. and six other countries.

If you watched the finals this past Thursday evening, you saw history in the making. For the first time ever, the final evening of competition went twenty rounds. Never before in the ninety two years of this event have competitors lasted that long. Think of boxers going twenty rounds. Neither would be left standing! And here's the other historical first. There were eight finishers! 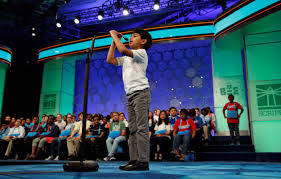 When we turned on the TV there were sixteen contestants who had weathered the initial competition and were going for the $50,000. prize. Slowly, very slowly, they began to falter. Who wouldn't? In the twenty rounds there was only one word I recognized and knew how to spell; kairos. I had to write down a few of the other words.

What if I gave you the definition, part of speech, origin and pronunciation of these words? You'd be able to spell them, right? How about moazagotl, or anthocyanin, or omphalopsychite or passacaglia? No guessing! This is for $50,000.! 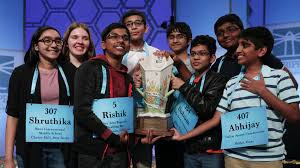 Those initial sixteen contestants Thursday evening went through ten rounds without missing a word. By the sixteenth round they were eight. When they were still eight in the eighteenth round, history had already been made and Dr. Jacques Bailey (who provides the words, year after year, and was the winner of the contest in 1980) announced that at the end of the twentieth round, all those remaining would be considered winners and receive the first prize.

Let me mention at this point two essential characteristics in this competition of a good sporting event. There was length. Tennis tournaments last more than three days. And on a good day you can have a final match that lasts three and a half hours, or more. Length of competition is often the sign of an intense and exciting sporting event and this year's Bee was long. At one point in the final, one of the eight contestants, instead of asking for part of speech, asked what time it was. When it was over, another mentioned how tired he was. I watched past my bedtime. 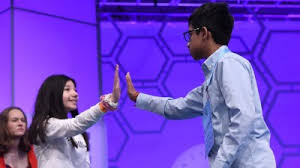 Another characteristic of a classic sporting event is sportsmanship and camaraderie. I've never seen so many high fives between competitors, nor such unrestrained joy with each other when they realized they had all won. Even when the eight who faltered left the stage they were hugged and congratulated by many who had gone before them. In fact, there seemed to be one official hugger, who hugged many as they left and held one of the winners in a long embrace.

You could tell the young spellers were feeling the pressure those last two rounds. It reminded me of the way athletes need to discipline the body to respond appropriately in tense situations. Here the brain needed to be disciplined and calm to keep the adrenaline from forcing a mistake. And the finalists were not anxious just for themselves but for the others as well. It was a group effort, everyone sending energy and support to the final contestants, so they could all say "we did it."

Next year they may need to lower the age for participation to under ten or maybe change it to participants over 65. That would be a sporting event! 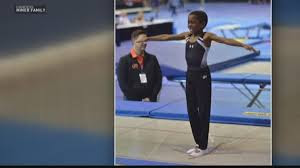 On the same day as the Spelling Bee, I watched a video of a young gymnast with autism. Her disability has not kept her from winning meets. The night before, millions watched the young man blind and with autism sing on America's Got Talent.

I'm constantly impressed these days with our young people. If it isn't spellers or singers or gymnasts, it's school strikers. It's Greta Thunberg and the way she has garnered the attention of world leaders (just not in this country). It's the students at Parkland. It's all the ways the young are overcoming obstacles, often assuming responsibility for things their elders have ignored. They are disciplined in mind and body, unafraid to put themselves forward. 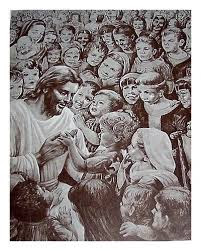 A long time ago, someone affirmed the young among us; that they brought with them signs of the Kingdom of God. How joyous it is when competition becomes camaraderie and all eight can be winners.

Carl Kline
Posted by Vicky at 8:27 AM