At the Southern Border – “A Laboratory of Injustice, A Landscape of Hope”

Part Two: A Landscape of Hope
(Ed. note - For Part One scroll down to yesterday's post. ) 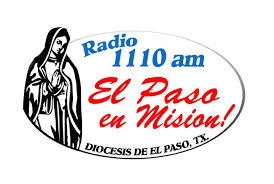 At the Hope Border Institute, encountering more of the righteous, the tzadikim, we were told of how the border has been a “laboratory of injustice,” but for them it is a “landscape of hope.” Our guide into Mexico was a young man named Diego, someone whose life represents the hope waiting to flower from that place. He grew up in Juarez, just over the border from El Paso. As a child, he would go back and forth for school, as so many did, for school, for work, to shop, to visit family. He spoke of his hope for the area, for the “borderlands,” a place that is one community on both sides of the border. He spoke of the gash formed by the wall that cuts through the region, dividing human beings from each other, people who are meant to be as one in the borderlands. It is a beautiful image for the whole world, human communities that transcend the borders between them. That is part of the teaching that rises from the “landscape of hope.”

As we made our way on foot back across the bridge between Juarez and El Paso, we encountered US guards just before reaching the border itself. 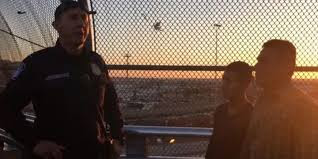 They are standing illegally on the Mexican side of the border, cynically placed there to prevent migrants from stepping onto US soil, from which they would legally be entitled to ask for asylum. From the bridge we could look down through steel grating and see migrants who had been arrested being herded into a makeshift camp, there beneath the bridge. In that moment I so wished that I had superhero powers, my body and soul aching to swoop down and carry them all to safety. I sang the words of Rebbe Nachman to myself as I cried, kol ha’olam kulo gesher tzar m’od v’ha’ikar lo l’fached k’lal/the whole world is a very narrow bridge and the main thing is not to be afraid at all. I hoped that somehow my singing might help the people below to find courage and not be afraid, even the children. 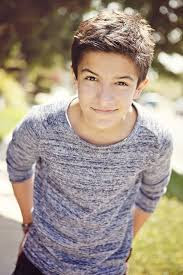 Standing at the wall that cuts through the heart of the borderlands, I searched for hope in the eyes of the children of Juarez with whom we spoke through the steel slats. With the help of others who could translate for me, I responded to one bright-eyed boy of eleven who asked me my name. When I told him that my name is Victor, he laughed and said, “no, it can’t be, that’s my name.” We laughed and joked for some time. Diego was standing beside me and explained that there is a special relationship between people with the same name. In Spanish, each partner of the same name is called a “tokayo” in relation to the other. I extended my hand through the slats and kept saying to little Victor, “tokayo, tokayo.” 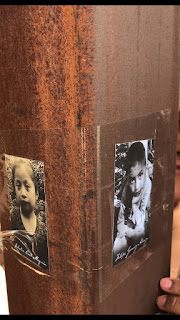 Just to the side of where I stood with Victor there were photographs taped to the cold steel, pictures of two other children, Jakelin and Felipe, the two children who died while in detention, their memories blessing the borderlands that it might yet become the landscape of hope it is meant to be. Her fingers gently curled around the steel edges of the slats, touching the photographs, a girl-woman of sixteen spoke with us, telling us of her coming marriage. A child-bride, her words carried wisdom beyond her years, words of lament for the suffering of so many, for those who had died, for those who struggle to find hope as they make their way through the borderlands. 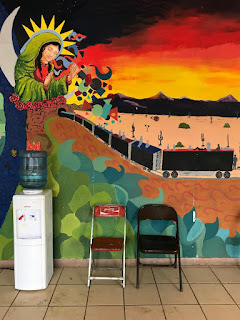 In the shy smile of this girl about to be thrust into womanhood, motherhood undoubtedly not far off, I saw the face of Our Lady of Guadeloupe as depicted in the brilliant colors of a mural on a wall of Casa del Migrante, a shelter that we visited in Juarez. A mother blessing her children, the mural makes clear the extreme dangers of the journey, migrants clinging to the roofs of boxcars as the train approaches a tunnel, darkness enveloping the future, but for the reassuring light of a mother’s smile. We were introduced at the shelter to a woman whose arm was in a cast. She had traveled some two thousand miles on foot from Honduras to Juarez with a broken arm, receiving medical attention only once she arrived in the shelter. 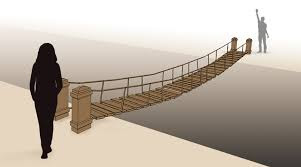 In the silent space amid the cracks of my broken heart, I am seeking, searching out the lessons of this journey to the borderlands. It is the silent space from which God calls to us. It is the silent space that we are called to enter in the very middle of the Torah, in the heart of the Torah, the silent space of the borderlands between the beginning and the end, the place where journeys meet as one. In the Torah portion for the week of our journey, Parashat Sh’mini (Lev. 9:1-11:47) we come as migrants to the very middle of the Torah, the silent space that lies between the two words darosh || darash/and Moses diligently searched. So it is for us to search, to seek, to hear God’s call from the very middle of the journey as we seek our way across the narrow bridge, right where the border is. At the very end of the portion, God tells us as we make our way through the desert, ki ani ha’shem ha’ma’aleh etchem me’eretz mitzrayim/for I, God, am the One Who leads you up from out of the land of Egypt. We are one with those who seek the way up from the lands of their suffering, seeking refuge among us. I pray that we shall be as God’s angels, like the tzadikim of the borderlands, helping them to make their way to safety, traversing what might yet be a landscape of hope.

Just before God’s promise to lead us up, at the end of Parashat Sh’mini (Lev. 11:44), we are told, sanctify yourselves and then you will become holy/v’hit’kadishtem vi’h’yi’tem k’doshim. In a very simple comment that goes to the essence of what it means to be holy, the modern Chassidic Rebbe, the Slonimer Rebbe, known as the N’tivot Shalom/Paths of Peace, draws on the classic teaching of the Talmudic sage, Hillel. Offered as a summary statement of all of Torah, Hillel taught: “what is hateful to you, do not do to your fellow” (Tractate Shabbat 31a). We need to imagine ourselves at the border, each as a refugee, asking of how we would wish to be treated. 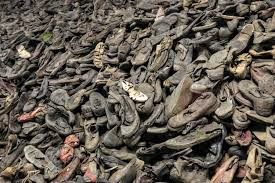 As Jews, we know what that has to mean. We know the ultimate consequence for us of doors closed to refugees. We see the shoes, the piles of shoes. We know to what ends the “banality of evil” can lead. Upon arriving for the start of this journey to the border, I walked to the El Paso Holocaust Museum and Study Center. Standing in front of the small, closed building, I wanted to affirm at the start of our journey the Torah’s reminder not to oppress the stranger, meant to be felt viscerally by each of us, to be felt in the depths of our soul, the verse that is repeated some thirty-six times, …for you know the soul of the stranger, because you were strangers in the land of Egypt/v’atem y’datem et nefesh ha’ger ki gerim he’yi’tem b’eretz mitz’rayim. What would it mean in the way of knowing the soul of the stranger, and what would be its impact on national policy, if we could see ourselves in every refugee at the southern border, if we could see and affirm our shared humanity? 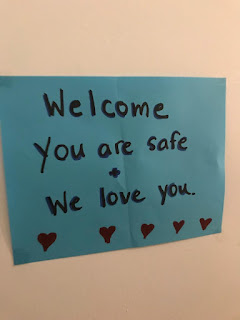 As we davened Mincha, praying the prayers of afternoon right alongside the border wall, song and prayer wafting through the slats to our young friends, I heard my name called as had never before happened in prayer. My eyes were closed as I prayed the Amidah, touched by fervor, by yearning. In the midst of prayer, I heard my name called by an angelic voice, gentle but insistent, calling over and over again, Veector, Veector, Veector. I began to smile, bursting with emotion, tears of joy and sorrow welling. It was God’s voice calling through little Victor, my tokayo, my friend. So may God’s voice of motherly love be heard in human key, giving succor and hope to all who make their way through the borderlands; giving challenge to all of us who are called to be as the tzadikim, to do the work of Elijah and help turn “a laboratory of injustice into a landscape of hope.”