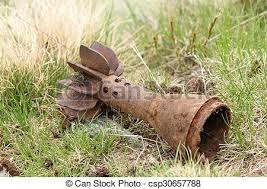 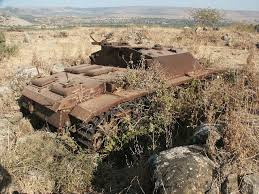 On a long ago Shabbos in the week of reading the Torah portion Lech L’cha (Gen. 12:1-17:27), while a rabbinical student in Jerusalem,  I participated in a retreat just outside of the city. The retreat was held at Kibbutz Ma’aleh Ha’chamisha, on the road from Tel Aviv to Jerusalem. The entrance to the kibbutz is near where relics of the 1948 war litter the roadside, the remains of military vehicles, of trucks that carried soldiers to battle, of tanks that tell of the deadly “progress” of weaponry when compared to the killing machines of today. The relics are preserved for posterity, whether to remind or to warn. If to warn, then of what they warn is left to passersby on the highway, whether the path of time shall lead to never ending war, or to a time when all weapons shall be as rusting relics by the roadside.

The Jerusalem to Tel Aviv highway passes through the broken pieces of military hardware, a reminder of our failure to find other ways to resolve conflict and create wholeness. That is the image that I still remember bringing to the retreat, having passed through the pieces just before arriving. On that Shabbos of Lech L’cha, the focus of our learning was not on the compelling opening of the parsha, not on the words themselves, Lech L’cha, and the start of the journey of the Jewish people. We did not look at the rich Chassidic reading, though drawn from ancient insight, that understands the two words not as a strong imperative, you shall surely go!,  but as a call to go to yourself. While that did not seem to be the focus, perhaps it really was, but approached from another vantage point.

I still remember vividly that the study focus of that Lech L’cha retreat was from a bit further on in the parsha, on chapter 15. I still remember being mesmerized by the imagery in that chapter, left with questions and wrestling that remain until today, questions that come to me year after year as we arrive at this stopping point, this place of retreat in the turning of Torah. Not yet called Abraham, Avram is afraid, feeling broken, feeling as though there is no future. Desperately wanting children, he and Sarai, not yet called Sarah, have despaired of that ever coming to be. God has in fact already told Avram to look up into the heavens and count the stars, promising that so shall their seed be for multitude. But Avram could not hear the promise from the midst of his own despair. 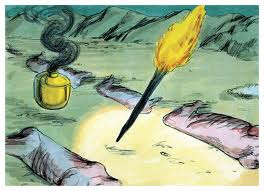 Perhaps as therapist now, God realizes that Avram needs to do something, to move, to create symbolically a new reality, one that emerges from the broken pieces of the reality in which he stands. In a strange and eerie ritual, God tells Avram to take several animals, three calves, and three goats, and three rams, and then a turtle-dove and a young pigeon. He is to cut the larger animals in half, placing the halves opposite each other, leaving a path between them.  All unfolding in the context of a vision, Avram does as he is told and then falls into a deep sleep. He is overcome by dread, a great darkness/ayma cha’shay’cha g’dolah.   When the sun sets in the vision-dream, a smoking furnace and a flaming torch pass between the pieces. God has told Avram of both the trials and tribulations that shall befall his descendants, an ironic affirmation that indeed he and Sarai shall have children, and also of the wholeness that he shall know. He is told that he shall go to his ancestors in peace, to be buried in a good old age. That is understood by tradition to mean that the two children yet to be born, Yishmael son of Avram and Hagar, and Yitzchak, son of Avram and Sarai, driven apart by the jealousies of adults, shall find wholeness in the turning of generations. God then makes a covenant with Avram, offering a promise of future. That covenant is called B’rit Beyn Hab’tarim/The Covenant Between the Pieces. 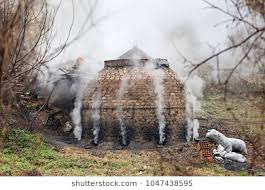 Ever since that long ago Shabbos spent at Kibbutz Ma’aleh Hachamisha, I have been fascinated by the B’rit Beyn Hab’tarim. I have at times felt haunted by the image of the “smoking furnace” and “flaming torch” that passed between the pieces, by the unmistakable Holocaust images that rise unbidden, the smoky stench of burning flesh almost palpable. As I recall, that was part of the focus of our learning on that Shabbos. Themselves touched by the haunting imagery, the rabbis read into the text. From the slavery in Egypt, of which the Torah tells, Avram is then told of the trials his children will face, of later oppressions and exiles, the oppressions of Babylon, of Persia, of Greece, and Rome. It is hard from our place in time not to add the ultimate trial of the Sh’oah, dread, a great darkness/ayma cha’shay’cha g’dolah.

From the very first time I traveled from Ben Gurion Airport to Jerusalem and saw the wreckage of war along the roadside, associations that came to be made with Parashat Lech L’cha, I have felt the vision of Avram to be as a wrestling toward wholeness in the struggle for peace among people. I have felt his dread and his hope to be a legacy for all of his children and theirs, for the whole human family, siblings all. It is a legacy of dread that each generation shall continue to litter the roadside with its tools of war. Avram’s dread becomes our hope when the dread is felt strongly enough as our own to shake us free, impelling us to change. It is Avram’s legacy of hope that we shall heed the warning and put an end to the strife that divides us all along the path of life. 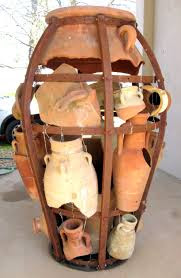 Of divisions within our selves, for the first time in all the turnings of Torah since that long ago Shabbos of Parashat Lech L’cha, I have encountered the Covenant Between the Pieces in a different way this year. Perhaps a new understanding has emerged in relation to stories of people’s lives I have heard in these times. Perhaps it comes of brokenness encountered in the quiet weeping of people among us, perhaps in the face of all the pain for all the wreckage left along the roadside by the hubris, the belligerence, and violence of these times. In my reading of Parashat Lech L’cha this year, I have found in the B’rit Beyn Hab’tarim a covenant that emerges from brokenness, a covenant and its promise made with all of those who make their way through the broken pieces of the world and of their lives. As God says to Abraham, so to us, do not be afraid/al tira. 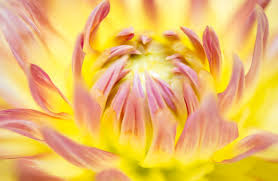 The Covenant Between the Pieces/B’rit Beyn Hab’tarim is the covenant that speaks to me in these days. It is a covenant made from in the midst of brokenness, one that calls us to see the broken pieces, even of our own making, that litter the way forward. And yet, it calls us to go forward, to see the light ahead that shines beyond the trials of the journey. As God promises to be with us, so we promise to be there with and for each other, in common cause hope already instilled. The Covenant Between the Pieces offers the hope of healing in the midst of brokenness. Walking on the way between all the broken pieces, whether the relics of war or the struggles of our own lives, we affirm the very human covenant of what it means to walk with hope through the brokenness of our lives and of the world, and so to live.