In Accordance With the Pace of Children - For Leo and Ruby

Of seasons dancing out of time and sequence, joined and juxtaposed in imaginary play, and if we are lucky, willing and wise, then to follow according to the pace of the children. So it happened on a late fall day that in looking ahead to winter, seeds of spring were planted and flowers of summer grew.

Ever since seeing a video of his zayde pushing a snow blower through the aftermath of a blizzard, our oldest grandchild, six-year old Leo, has wanted a snow blower of his own. I tell him each time he asks that I have spoken to his parents and they promise that when it snows in Los Angeles they will get him one. Rather than wait for that unlikely event, I took Leo and four-year old sister Ruby to shop for a snow blower this week. For a number of years, we have owned a snow blower together with several of our neighbors, adding a communal dimension to snow removal that feels right, needing to be in touch with each other in the face of every storm, warmed by the need to communicate and coordinate, to know that all are well. Our old machine wore out by the end of last winter and we needed to get a new one before the snows of this winter. I offered to do some research and to go look at a new machine. 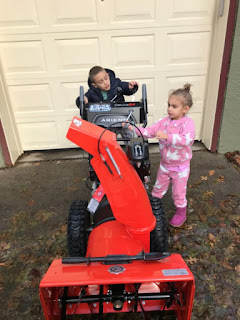 On the very morning that Leo, Ruby, six-month old Wolfie, and their parents arrived this week, I asked the two elder siblings if they would like to come with me to look at and maybe even buy a snow blower. Though a bit bleary from an all night flight from Los Angeles, they were thrilled to finally get a snow blower, agreeing that it would stay here in Boston for us to use. Meeting one of our neighbors at the store, the kids delighted in reaching up to the handgrips of different machines, checking the tires, turning cranks and pressing buttons. There was some consternation concerning color. Leo wanted a blue snow blower, and, yes, Ruby wanted a pink one. They finally agreed that because the only choices were red or orange, orange would be okay because that is the color Oma wanted. After some discussion with a salesperson, we decided it would be the nice big orange one. We then went inside to do the paperwork and actually purchase Leo and Ruby’s brand new snow blower.

As I stood at the counter, I realized that the salesperson was looking over my shoulder. I had been oblivious to the sounds of children coming from somewhere in the store behind me. “Are they yours?” the man asked. At first I was flattered, wondering if he really thought I could be their father. Hesitating for a moment, not wishing to dispel my own sweet illusion, I said, “Well, they’re my grandchildren.” I quickly realized that he was not concerned about my ego, or with generational niceties. Putting his pen down, the man leaned toward me and with measured tone as cold as the flying snow said with a rather loud, feigned whisper, “could you ask them to put the rake back?” 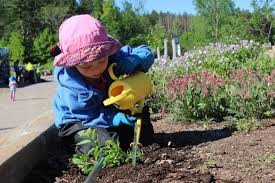 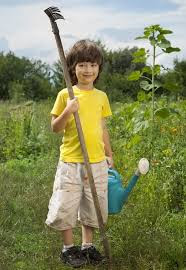 Walking over to Leo and Ruby, I was mesmerized by their impromptu game. As we were planning for the coming New England snow, these two foreigners from southern California were in the midst of sunny gardens of spring and summer. I paused for a moment to watch, realizing that the storekeeper’s eyes were fixed on me, a snow blower sale waiting to be completed. There was that rake to be removed in Leo’s right hand. In his left hand, poised above Ruby’s head, was a large watering can, apparently unseen by the storekeeper. As Leo poured imaginary water over his sister’s head, he said, “okay, you’re the flower and now you are growing.” As I delayed for one more moment the mission for which I had been sent out into the fields, I heard Leo say to Ruby, “okay, now you be the farmer and I will be the flower.” Spellbound, I asked these two farmers and flowers if they thought they could just use the watering can now that they had softened and furrowed the earth. Gently putting the rake back on its hook, I returned to the coming winter and the task at hand, ever so grateful for the gift of childhood’s season and for the opportunity to pause and go, if but for a moment, at the pace of the children. 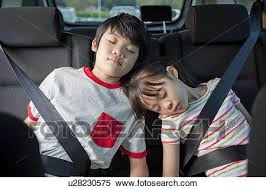 On the car ride home, I thought about the weekly Torah portion, Vayishlach (Gen. 32:4-36:43), one verse shimmering in the rear view mirror as I looked at Leo and Ruby in the back seat. Jacob is returning to Canaan, dreaming his great dream of wrestling in the night (Gen. 32:23-30), fear and hope entwined on the eve of encountering his brother after twenty years apart. Having fled from home after twice tricking his brother, fleeing from Esau’s threat to kill him, Jacob is now told that Esau is coming with four hundred armed men. With an elaborate plan set in place to assuage his brother’s anger, all is put aside at the moment of encounter as Jacob rushes toward Esau and the two brothers fall into each other’s arms weeping. After their tearful reunion, both parties prepare to go on. Esau suggests that they travel together, but Jacob demurs. A moment of tangled emotions and possibilities, we are left to wonder what if, what if they had gone on together. However much it may have been an unfortunate matter of avoidance, the reason that Jacob gives for not going on together is one that I have always treasured and found great meaning in, and now even more so. Jacob says to Esau, My lord knows that the children are tender/ha’y’ladim rakim…; Let my lord, please, pass on before his servant, and I will continue to move at my own quiet pace…, in accordance with the pace of the children/l’regel ha’y’ladim…(Gen. 33:13-14). 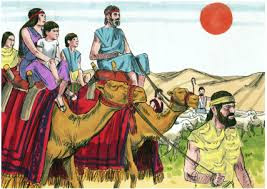 While Jacob has also said that he will go at the pace of the animals, that they not be overdriven, the emphasis is on the children. It is the children who are called rakim/tender. It is a word most often sorely mistranslated later on in the Torah (Deut. 20:8). Among those who are to be sent home from battle is the young recruit who is described as ha’yarei v’rach ha’levav, generally translated as afraid and fainthearted. Drawing from father Jacob’s words, hardly to be seen as suggesting cowardice, we might better understand this would be soldier as “one who is of reverential and tender heart.” As was every soldier once, and all who would raise a fist or weapon to harm, this one too was once a tender child, counted among those at whose pace we would do well to go.

So too, it is said of mother Leah, that she was of tender eyes/v’eyney Leah rakot. In learning to go at the pace of the children perhaps we shall our selves retain as adults some of that tenderness that Jacob saw and sought to protect in the little ones. Perhaps, as well, if we could see through the tender eyes of Leah, we might also see within and discover our own place of tenderness. The pace of the children is not only about physical pace, but about a way of thinking and feeling, of mind and heart and imagination. 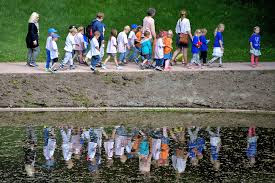