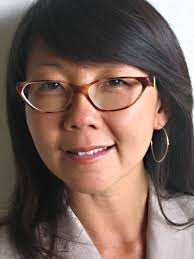 Thanks to the reporting of independent journalists like Sarah Lazare, we are learning the real story behind the historic Korean Peace Declaration. Lazare’s conversation with Korean peace activist Christine Ahn was featured in the web only edition of In These Times, April 30, 2018.  (In These Times).  Her report and the Panmunjom Declaration for Peace, Prosperity and Unification of the Korean Peninsula are the basis of the following story. 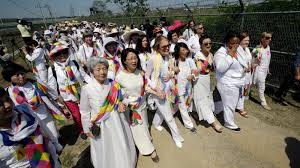 According to Ahn, international activists and peace movements forced the North and South Korean leaders to release a statement that declares the “new era of peace,” which includes taking steps toward family reunification, denuclearization, and cessation of all hostile acts. She reminds us all that Korea and the Korean people are at the center of the process leading up to the peace statement.

In her interview with Lazare, Ahn explains that the Candlelight Revolution led to the overthrow of President Park Geun-hye and the election of President Moon Jae-in, who comes from the movement for democracy and human rights. His popularity rating among South Koreans is between 70 and 80 percent. 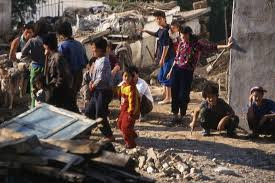 Also according to Ahn, in 2016 a white American lawyer, whom she does not identify, showed up at a press conference to accuse the peace movement of being the work of the North Korean government. Now, Ahn says, we have to continue to build an international movement and increase mobilization. More than 20 countries participated in the Korean War. According to one military historian cited by Lazare, during the Korean War at least 18 of North Korea’s 22 major cities were “at least half obliterated.”  When we hear endless stories about the poverty in North Korea this history is seldom told, but is certainly worth remembering as we think about the opportunity of the present and our shared responsibility for the future. 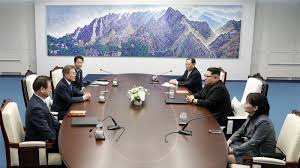 The Panmunjom Declaration for Peace, Prosperity and Unification of the Koran Peninsula has three main sections. 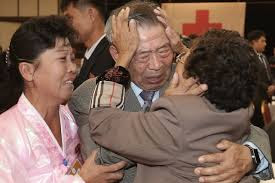 The first section begins with a commitment to “reconnect the blood relations of the people and bring forward the future co-prosperity and unification led by Koreans.” It also contains an agreement to hold dialogue “at a very high level” to implement the agreement, and established a joint liaison office. The two sides agree to demonstrate their unity by jointly participating in international sporting events, swiftly resolving humanitarian issues, and proceeding with family reunification programs. The first family reunion will be held on August 15, 2018, National Liberation Day (the anniversary of Korean liberation from Japanese occupation). 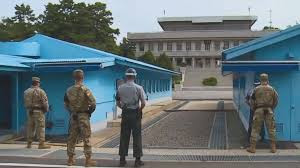 The second section commits both South Korea and North Korea to make joint efforts “to alleviate the acute military tension and practically eliminate the danger of war on the Korean Peninsula.” The two sides agree to transform the DMZ into a peace zone, and agree to hold meetings between military authorities. The first meetings will be held at the rank of general in May.
The third section reaffirms “the Non-Aggression Agreement that precludes the use of force in any form,” and contains an agreement “to carry out disarmament in a phased manner.” Both North Korea and South Korea agree to enter into trilateral meetings with the United States and quadrilateral meetings involving the two Koreas, the United States, and China, “with a view to declaring an end to the War and establishing a permanent and solid peace regime.” It also includes a commitment to a nuclear-free Korean Peninsula.

Getting the United States and China to sign a peace agreement may be the most difficult part of the Panmunjom Declaration for Peace, Prosperity and Unification of the Korean Peninsula. Informed advocates in the United States can and will make a difference.