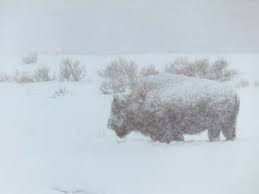 Once on the Cheyenne River Reservation I had the opportunity to visit with the keeper of their bison herd. It was shortly after one of the worst blizzards that area had seen in a long time. Hundreds of cattle died. The drifts were so high and hard, fences were useless.

I asked this young man if they had lost any of their bison in the blizzard. He said yes, they had. One of them crossed over the fence on a snow drift, got out on the bridge over the Missouri River and fell to his death on the ice below. It made me realize how well adapted to this climate bison are and how difficult blizzards could be for immigrant cattle. One bison dead; hundreds of cattle. 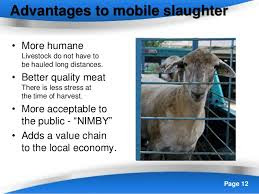 I also learned about their slaughtering operation. The tribe had ordered a special trailer that could be driven into the field when they took a bison. It was important to take the meat quickly. If there was too much trauma for the animal it produced toxic substances that ruined the meat. So they did their best to fell the animal at peace in the field. Then they would begin the harvest as quickly as possible.               A moveable trailer accommodated this operation.

Traditionally, in Native culture, one offered prayers of forgiveness and thanksgiving for taking life. Creatures had moral integrity. They were not just there to serve humans but had their own Creator given dignity.

I've thought about this many times as I have reflected on our industrial meat factories. They seem to be filled with trauma. Six states have even found it necessary to pass "ag-gag" laws. These laws aren't passed to prevent animal cruelty but to keep it from becoming public. They protect these factory farms from transparency. Filming the treatment of animals in these confined animal feeding operations (CAFOs) becomes a punishable offense. When people see these films, it has severe economic consequences. Watchers don't want to eat meat, or eggs!

Do we really think it's healthy for animals and humans when millions of haggard, featherless hens are crowded into microwave size wire cages? When they can't spread their wings; sometimes laying their eggs on their dead and rotting cage mates. Do we really believe the eggs they lay and we eat are OK?

We've been discussing whether animals deserve moral concern the same as humans in ethics class. My guess is most people in our society follow Immanuel Kant when it comes to animals. "But so far as animals are concerned, we have no direct duties. Animals … are there merely as means to an end. That end is man." Or perhaps our society is indebted to Thomas Aquinas. "Hereby is refuted the error of those who said it is sinful for a man to kill brute animals; for by the divine providence they are intended for man's use in the natural order. Hence it is not wrong for man to make use of them, either by killing them or in any other way whatever." 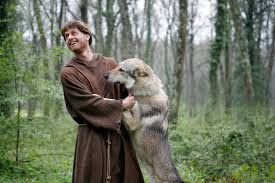 Or perhaps you might prefer to refer to Saint Bonaventure. A Franciscan, he believed creatures were the "footprints of God." He believed we needed each and every one of them in order to recognize the glory and grandeur of God. To lose even one species was to diminish God's glory.

We don't know how many species there are on the planet. But  estimates are we lose between 1,000 and 10,000 species a year because of human activity. There are so many species now threatened, especially with a changing climate; think penguins.

Several years ago, I mentioned in a small rural church I had just begun serving, that I was a vegetarian. It was more of an aside, not a particularly relevant point to the sermon. One member heard it loud and clear. After the service I was confronted. He said, "do you know where you are? This is cattle country! You must be courageous or crazy talking about being a vegetarian."

So far it's only red meat vegetarianism. That's been difficult enough in a hamburger crazy society. But fowl will be next and perhaps fish will follow. I'm still working on it. And since nobody knows the content of pepperoni, that will likely be last.

The excuse for my slow process is because the philosophical and theological convictions one holds are hard to implement when temptation and contrary attitudes are rampant. 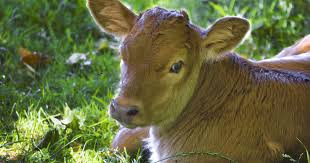 Do animals deserve moral concern? It's an important question as we face the future. Our state government seems intent on pushing CAFOs, especially in our area. We already have our share. They seem to exercise considerable economic and political clout. On the other hand, our farmer's market continues to grow and develop. We can get our eggs from a local farm family. And small scale farming seems ready to make a comeback.

My question is, is anybody saying prayers at the slaughterhouse, or even at the dining table?