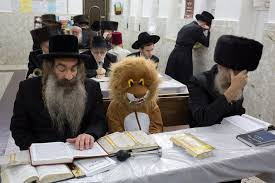 Purim is the day of greatest levity in the Jewish calendar. It is a time to get out of our selves, to let go, to laugh, to engage in good-natured mocking. That is why we dress up, costumes the order of the day for adults as well as children, all indeed as children. Learning to let go, to step out of our self-imposed restraints on laughter and levity, is all part of the Purim theme of turning reality on its head. It is part of the Purim nature of creating an olam hafuch/an upside down world. The upside down world we come into is meant to be the truer, clearer world. The impetus to create a different reality is taught on Purim largely in regard to externals, the trappings of costume, of plumes and pageantry. It is from there that we come to think about the deeper meaning of turning reality on its head, creating a world that isn’t yet, but might be.

When I think of the phrase olam hafuch on Purim I quickly recall a Talmudic story set in a very different context than Purim. In what we might call a “near death experience,” Rav Yosef son of Rabbi Yehoshua was gravely ill and fell into a coma. Regaining consciousness, his father asked him, mai chazit/what did you see in the next world? Rav Yosef said to his father, olam hafuch ra’iti/I saw an upside down world. The ones above in this world are below in the world to come, and the lowly in this world are above in the world to come. R. Yehoshua said to his son, olam barur ra’ita/you have seen a clear world (Bava Basra 10b).

While I prefer to take the vision of what Rav Yosef saw a little further and imagine no one with the upper hand, but all equal in the world to come, the story is deeply telling. The world as we know it, one of pain and strife caused by human inequality and injustice, of violence and greed and hate, this is the upside down world. The vision that we seek to fulfill of a repaired world is the world of clarity, of the vision brought into focus through the lens of time and made real. In all of its craziness and zaniness, this is the deeper message of Purim. 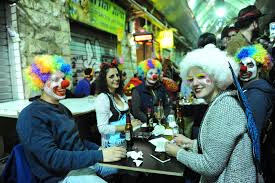 Our own festivities in my synagogue on Purim night this year helped to draw me out into that place of vision by realizing how much fun we can have together. We danced and paraded in costume and song, a moment ostensibly meant to be for children saw children and adults all gleefully dancing and strutting their costumed selves in gleeful delight. Our Megillah readers graciously chanted as children all but climbed upon the old Scroll of Esther spread out on the low table. Our Purim shpilers, the Purim playmakers who mock and poke good-natured fun, outdid themselves, creating themed lyrics worthy of Broadway, so much heart and love for who we are, all the while gently mocking and making us laugh at ourselves. To learn to laugh at our selves is the best way to learn to embrace each other and others for whom each one is, frailties and strengths woven together as one.

And yet, there is still the challenge of the Megillah, its own lesson found in learning to hold at once all aspects of reality, the seamy and sordid with the sublime and beautiful. There is still such violence in the Megillah, hate directed at us and then our own murderous response when given the chance, tens of thousands of Persians killed at our hand when the genocidal edict is reversed. And as the scroll unwinds, we are challenged to see the turning of the world, wondering as we go which is up and which is down, which the real world, which the one that is upside down, which the inverted and which the one of vision clarified. 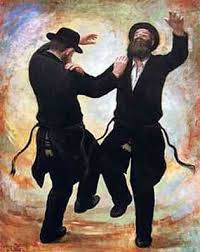 Late on Purim afternoon it is my custom to go to a nearby Chassidic community whose kind and joyful spirit consciously infuses my own synagogue. I found it hard to let go amid the joy that filled the room, too rooted within myself and in the world as it is.
Alcohol flowed freely and each one around the table offered words of Torah with greater and lesser degrees of seriousness, interruptions of song and l’chayims throughout. Pressed to share some words, I offered pure Purim Torah, farcical interpretations of words and numbers in the Megillah, playing on Shushan Ha’birah/Shushan the capital become as “Shushan of the flowing beer.”    Forced out of myself, sharing became a way of connection, of opening up, loosening up in a deeper way than the way of alcohol, quietly nursing my own strong drink slowly over time.

After I spoke, a dear friend and teacher to many began to teach. I had needed to leave well before this point, or at least I thought I had needed to leave. Hoping to hear Reb Nehemia’s words, our host asked if I would stay if Nechemia spoke next. And so I stayed, and I stayed, song and laughter interspersing deep words of Torah, teaching well beyond Purim and yet rooted in the most difficult places of the world as it is. R. Nechemia taught from the Chassidic teacher, the Ma’or Va’shemesh, Rabbi Kalonimus Kalman Epshtein. I was spell bound as a teaching of violence transformed unfolded at that table, the world as it is turned upside down, nonviolence replacing violence. It became a shining instance of the way Torah opens to reveal a new reality right from within its own “harsh passages,” pointing beyond the Torah’s own places of violence. 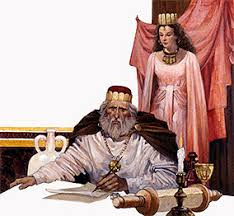 Here in the midst not of the Torah, but in the midst of the most violent tellings of the Megillah, the Ma’or Va’shemesh looked at the verse that tells of the Jews slaughtering their would be Persian killers. We are told in the Megillah that many of the peoples of the land became Jews/v’rabim me’amei ha’aretz mit’ya’hadim, for the fear of the Jews was upon them (Esther 8:17). On that verse, the Ma’or Va’shemesh says it was not fear as the terror of being slaughtered, but rather it was fear that came as utter amazement and respect. They saw Mordecai’s wisdom and were moved to the core.        Transforming the slaughter, the Rebbe writes, they became Jews because they understood and recognized the wisdom of Mordecai’s Godliness, and they gave thanks for the faith of   Israel… 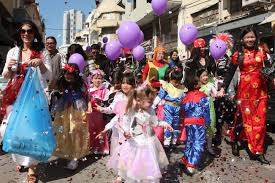 In the Torah weekly portion that framed Purim, Ki Tissa (Ex. 30:11), we encounter great wisdom in B’tzalel, the artisan and teacher entrusted to lead the building of the Mishkan. Guided by the light of the Ma’or Va’shemesh, we understand what true wisdom means. As B’tzalel weaves together the gifts of hand and heart as given by all the people, we realize that the true sanctuary he is building is that of a world whose ways reflect the vision clarified, not the inverted world as we know it, the olam hafuch, but the world as it is meant to be, the olam barur. As we hold all of the harsh realities of the world as it is, in the way of Purim that teaches us yet to rejoice, may we dance and sing, children all, as we make our way in costumed parade to the Mishkan of the world as it might be.

Rabbi Victor Reinstein
Posted by Vicky at 7:09 AM