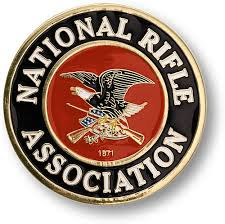 Ever since the Marjory Stoneman Douglas High School Valentine’s Day massacre, I have been entertaining a fantasy.  I keep trying to discern the level of violence that still functions in my own psyche so that I do not add to the sum total of violence already rampant in this country by putting the fantasy out there.  I’m not sure the fantasy meets my desire for nonviolent responses, but here goes:     In a parallel universe not unlike our own,  in the interest of full transparency, every elected official or person currently running for office, from local town and school boards to county officials to state legislatures to the federal government to the highest office in the land who has received money for any reason from the NRA, is required by law to wear a  clearly visible jacket patch or arm band whenever they appear in public.   That patch or arm band reads “I have taken NRA money in order to get elected." 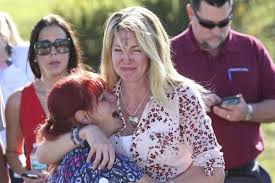 In that same parallel universe, said officials must comply with a job description for their office that requires them to appear immediately, at their own expense, at the site of any mass shooting. They are  required to assist with the removal of bodies, helping to zip them into body bags. They  are required to witness the immediate trauma to children and their families. They are required to attend every wake and funeral and memorial service and sit with the families of the victims as they mourn. They are required to throw the last shovel full of soil on the grave of an innocent teenager.   They do this in silence and are required to wear the above mentioned patch or armband in any and all of these situations.
I awake heartsick in the morning, still burdened by the news of the previous day - certain that it will not be any better today.  The soul of this country is in danger.  No matter where I turn I encounter people who are affected by a kind of gray malaise that infiltrates life at every level - a sense of powerlessness - helplessness to make a difference, to change the direction of public policy, to affect the cynical attitude of a social, political, and even religious stance that believes more guns in more hands in more places will make anyone safer. 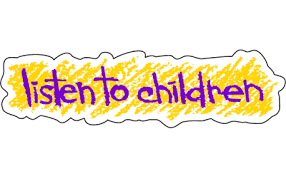 For several years now, I have had a bumper sticker that reads :  LISTEN TO CHILDREN.  I keep it on a bookcase in front of photos of my beloved grandchildren.    In paying attention to them over the years of their growing up, I have been amazed at the innocent wisdom that emerges from them. I have been challenged by their questions about why the world is the way it is.   As they mature (they are 18 and 16 now) their wisdom is more mature and the questions are far more challenging.   I can listen to them, but I     am often at  a loss to answer them.
At a recent retreat, I heard the keynote speaker observe that we live in very fear-full times.  He speculated that the fear itself may mean that we are in the process of a great transformation; that, indeed, the  fear and the siren call to protect ourselves with more and more weapons promulgated by the NRA and its devotees, may be a massive resistance to an approaching societal transformation of consciousness that rumbles in the  not too distant future.  Another fantasy??
It is said that outrage has a shelf life of about one month before it begins to fade or be replaced by the next insult. It is too soon to know whether the angry intelligence of the young people of our country will be the thing that tips the balance in favor of sanity with regard to sane gun control policies.   But what if the malignant attacks by anti-gun control voices against  the young people are a fear response to their articulate grief and rage?  What if the handwriting IS on the wall?     It is fortuitous that high school walk outs  across the country are planned for March 14 exactly one month post massacre;  that a massive demonstration  in Washington DC is planned for  March 24.   The outrage will exceed its shelf life by at least 10 days - - and we can build on that.
The prophetic words of Isaiah reverberate across the ages: and a young child shall lead them... part of Isaiah’s messianic vision and hope for Israel.  For Christians, the words allude to  expectation of Jesus.  The hope for a sane and peaceful world where justice and compassion are the dominant values is an ancient one.  Every generation has looked for its messianic deliverer. 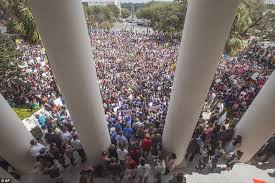 Some time ago I bought a book just because the title intrigued me: THERE IS NO MESSIAH and you’re it  by Rabbi Robert N. Levine.  From the back cover: Rabbi Levine offers  “a challenge to each of us  to take personal responsibility for repairing the world.....This fascinating book is our call to see ourselves as the fulfillment of, not the anticipators of, messianic change.”  Our kids are rising to the occasion.   In the real world, it is appearing  to be less of a  fantasy that the children may rise up to lead us into a messianic change.  In the real world it is a sacred task for us to LISTEN TO CHILDREN and to take up their beautiful outrage and anger as our own, to  join them in becoming the change we want to see.