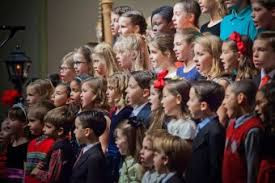 There's a singing video making the rounds on social media. Apparently there are more than 12 million people who have viewed it. You see a teacher sitting on the bleachers at her school as a group of young people are singing to her. The children are smiling and moving with the music, even while sitting, and are obviously into the song. They are probably forty or fifty in number, racially diverse, accompanied by what one assumes is their music teacher. At one point he has a short solo part and a beautiful voice. Toward the end of the song the children all hold out a flower they had hidden below their seats and extend it toward the teacher.

In all of this, we periodically see the teacher, who is crying. She wipes her eyes. She manages weak smiles before the tears flow again. At one point she is so moved she almost falls over backwards. It's as if the power of the music and the energy of their care for her sweeps her off her seat.

She has cancer. The students know it. They are offering her a love song. It made me cry. 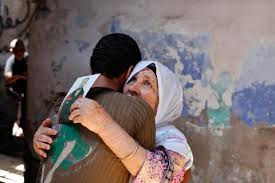 Another video on social media made me cry as well. This one was of a mother forgiving her son's killer in court. She hugs him. She hugs his mother. She greets all the members of his family. She tells the killer she will always be a part of his life and she will not let the society kill him. She makes it clear that all lives are connected so taking one life affects many lives. She is obviously Muslim and acting out of her faith.

I may be getting more sentimental with age but I don't want you to think most things make me cry. Still, the tears do seem to come more lately and I'm wondering why. They can flow listening to good music or watching good theater. It can happen when I'm telling a story about an event that moved me or reading someone's else's story in prose or poetry. I've begun to seriously ponder what's behind it all.

This is my conclusion so far. In a world seemingly gone mad, I crave examples of kindness and harmony. In the event with the teacher, I saw and heard both. After seeing the video, I wondered about the healing capacity of that experience for the teacher. How did it impact her body? How did it help her fight her cancer? 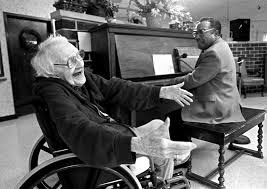 We are learning some of the physically therapeutic benefits of music. Studies have concluded that music can make a difference for those with brain injuries, stroke, Parkinson's, perhaps even autism. Music therapy has come into it's own. Movement can be aided by rhythmic auditory stimulation. Musical improvisation can help with emotional expression. Singing and respiratory exercises can aid in restoring speech. Even persons with severe brain damage and no speech or movement can be stimulated by music to smile.

Once when I was as ill as I've ever been, the Canadian Tenors sang constantly by my bedside. They moderated the pain as well as any opioid. If I woke in the middle of the night and the CD had run its course, we just started over again. Given how mothers have used lullabies to soothe crying babies for ages, it seems strange we haven't recognized the therapeutic value of music as medicine sooner.

Then there's kindness. It's also about harmony. It doesn't have to be as unusual and dramatic as forgiving your son's killer in court. It can be as everyday as forgiving the person who cuts you off in traffic instead of carrying that anger through your day.

Undeserved kindness is so exceptional it can be life changing. Especially when we know we've done wrong, to be forgiven and embraced is shocking. To be kind and forgiving when we've been wronged, is equally shocking. Kindness sets in motion an energy that creates change. When God does it, it's called grace.

I confess it's difficult to face some days with harmony and kindness. If one is open to what's happening in the nation and the world, there is bound to be disharmony and upset. At one time we were promised a kinder, gentler conservatism. There are no such claims now. At one time we had political parties that could sing in harmony (with enough practice). Today they sing very different tunes, alone.

Our task is to keep singing. Music and harmony is the way of the world. Do you remember that old round we used to sing, "Music alone shall live, never to die." And our task is to do those small acts of kindness for those with cancer, brain injured, or simply stressed in the super market. 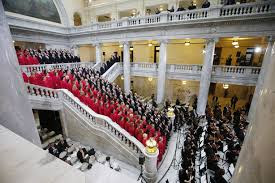 One of these days maybe we can send a mass choir to Washington to serenade the Commander in Chief and the Congress. Perhaps there could be some healing.