This Thanksgiving, some things I saw on the internet made me think more seriously about the first inhabitants of this land. One writer told the traditional Thanksgiving story of friendship and a shared meal with the usual characters like Squanto, helping the early settlers plant and harvest their escape from starvation.
Another told the story about how the first Thanksgiving was proclaimed by then Governor Bradford of the Plymouth Bay Colony, as a celebration for massacring the Pequot people. The Governor wanted prayers of gratitude in the churches for this great victory. One commentator of the day remarked, "Let the whole Earth be filled with his glory! Thus the Lord was pleased to smite our Enemies in the hinder Parts, and to give us their Land for an Inheritance." Another said God had destroyed the enemies of his people; "Thus did the Lord judge among the Heathen, filling (Mystic) with dead bodies." 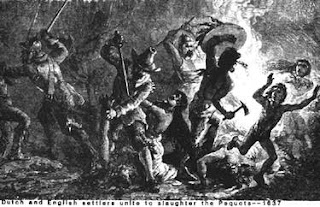 A third video shows some young Native American women telling the story of theft, pillage, rape and terror and then turning over a laden Thanksgiving table.
Different people see history through different eyes. But European Americans should all be able to recognize three things: we stand on stolen land that belonged to someone else; the original Americans are still with us; the first inhabitants continue to petition for recognition of their rights, like clean water and sustainable economies
And although there are still Christians who stereotype all tribal peoples as pagan or heathen, the informed are aware of the deep spirituality and sacred traditions that have been carried on, even in the face of government prohibition and attempted genocide.
For fifteen years I coordinated a program in reservation communities where people came from many different countries and across the U.S. to immerse themselves in traditional and contemporary Native American life. We carried our home, a couple of tipis, on the top of our vans and without watches or rigid plans camped on the property of hosts and welcomed visitors as resource persons. As often happens in Indian country, people heard of our interest in learning and wonderful elders and teachers found their way to us. 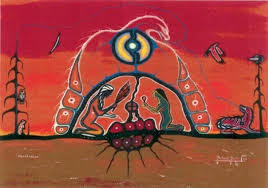 During and after these programs I was sometimes invited to ceremonies, including the sweat lodge ceremony. It's not my place to say too much about sacred ceremonies of Indian people. But as a Christian pastor, I must say that the sweat lodge experience for me was like a whole body experience of baptism, of being born again.
One is cleansed not only of the bodily toxins but through prayer, of the emotional and spiritual toxins as well. If the arrogant and self righteous in the Christian community could give up their sense of superiority for just a moment, to truly learn of this sacred ceremony, they  might recognize that other traditions have similar and just as meaningful ways of approaching the Creator.
Some Indian people have confessed that when they first heard about Jesus from the early missionaries, they understood. Their culture encouraged them to be willing to suffer for others. They were schooled in the value of generosity. There was an emphasis on the common good. So when they heard about this person who went to his death for others, it fit with their traditional understandings. Their sun dance ceremony represented something similar. It was about purification and sacrifice.
What those same Indian people didn't understand was all the baggage that came with Jesus. Baggage that eventually resulted in the destruction of indigenous people and the outlawing of their most meaningful ceremonies. Those of us of European descent would do well to confess it. It was the self righteousness and manifest destiny of those early pilgrims that resulted in the elimination of the Pequot people. It was the papal declaration of the Doctrine of Discovery that set the stage for stealing land and exterminating resisters. The Christian religion brought colonial baggage to this continent, conquering for Christ. 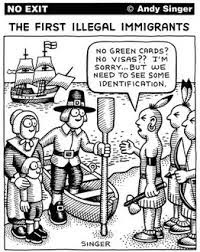 And in many ways, that nativist spirit is still too prevalent in the land. The cartoon of Indian people cutting off new immigrants from Europe is altogether appropriate in a Trumpian climate. One cartoon has the picture of an Indian man with the words,  "So you're against immigration? Splendid! When do you leave?"
We need to work harder in this culture to incorporate some traditional indigenous values. We're in relationship, with all that is. When you enter the sweat lodge ceremony, you remind yourself of this reality. You are also reminded of the elements of all life: water, fire, air and earth. You are reminded we can't treat the earth like a thing and expect it to give fruit in its season. We can't treat the waters like our toilet and expect to be healthy. We can't use and misuse the others around us and expect mutual aid.
Religious leaders from all across the country disowned the Doctrine of Discovery at Standing Rock last year. They confessed God did not give anyone a right to take lands occupied by others. Now it's time to give flesh to that confession. A good first step would be respecting Native sovereignty and Native values when it comes to pipelines.