Contrary to the Gospel? 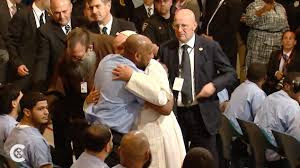 In a recent opinion piece in the Boston Globe (Wednesday October 18, 2017), Jeff Jacoby asks the question: “If the death penalty is in the Bible, how can it be ‘contrary to the Gospel?’”  Jacoby took issue with Pope Francis’ statement that capital punishment is “contrary to the Gospel...” arguing that “To nonbelievers and non-Catholics, the whole subject may seem little more than Vatican shop talk. Legislators, not popes, write our criminal codes. If Francis wants to change church doctrine, why should outsiders care?  This is why: Because the death penalty is a tool of justice that no decent society should unequivocally renounce, and because more innocents die when the worst murderers face only prison. The Catholic church at its best has been a mighty upholder of human dignity. But when remorseless killers have a greater right to life than their victims, human dignity is trampled into the mud.”

Our Torah study group took up the discussion at our mid-week meeting, examining  Genesis 9:6 where, indeed, there seems to be a divine directive about capital punishment: Whoever sheds the blood of man, by man shall his blood be shed.  One only has to read a few commentaries to discover that there is so much more to this verse than meets the eye - - far more than can be offered in a brief blog.  Both Jewish and Christian  traditions  have  produced volumes  over the last 3000 years arguing both the sanctity of human life and the issue of when it is permissible to take a human life as punishment for a crime.

There are two parts of the same verse that are in  tension with one each other.  The first part suggests retributive justice - an eye for an eye, tit for tat justice.  Capital punishment is the uttermost expression of this kind of justice - a justice that requires retribution - a life in payment for a life : Whoever sheds the blood of man, by man shall his blood be shed.”  The tension mounts when the second part of the verse impinges on the first, echoing earlier verses in Genesis that affirm that humans, male and female, are created in the image and likeness of God: For in the image of God, God made man.” The juxtaposition of the two statements brings a heart wrenching moral and spiritual, religious and political dilemma into focus.    When a human life is taken - whether by criminal intent or through state sanctioned execution, we are challenged to grapple with the idea that the image of The Divine is defaced.

Historically,  in Jewish tradition, there were so many “stringencies” in place regarding a death penalty that it was said that a Sanhedrin that puts a man to death once in seven years is called a murderous one.  Prominent 1st century rabbinic scholars seemed to agree: Rabbi Eliezer Ben Azariah said 'Or even once in 70 years.' Rabbi Tarfon and Rabbi Akiba said, 'If we had been in the Sanhedrin no death sentence would ever have been passed.'

Rabbi Jonathan Sacks reminds us that there is One God, experienced in different ways and named by different names in the traditions of the People of The Book: Judaism, Islam, and Christianity.  In The Trace of God/Noach, Covenant and Conversation 5778 on Life Changing Ideas in the Parsha he writes: “If there were only one human being, he or she might live at peace in the world.  But we know that this could not be the case because it is not good for man to be alone. We are social animals. And when one human being thinks he or she has god-like power vis-a-vis  another human being , the result is violence.  Therefore, thinking yourself god-like, if you are human, all too human, is very dangerous indeed.  That is why, with one simple move, God transformed the terms of the equation.  After the flood, God taught Noah (and through him all humanity), that we should think not of ourselves but of the human other as in the image of God.  That is the only way to save ourselves from violence and self destruction.  This is a really life changing idea.  It means that the greatest religious challenge is: Can I see God’s image in one who is not in my image - whose colour, class, culture or creed is different from mine?”

I would push the challenge even further.  Can I see God’s image in the perpetrator of a heinous crime?  Can I see enough of the Divine Image in the mass murderer or the rapist or the abuser of a child that I can  say “No” to state sanctioned murder in my name as the retribution required by the law?

Is capital punishment contrary to the Gospel?  I am not a Roman Catholic.  I confess there are some days when even calling myself a believer would put me on shaky ground.   But I stand with Pope Francis on this one.  It defies imagination to ever think of a person like Jesus, upon whose life the Gospel is based, standing in judgment over another human being and condemning that person to death.
That would, indeed, be contrary to the Gospel.