The Prayer of a Small Folding Challah Knife
September 22, 2017

One of my treasured ritual items is a small folding challah knife that came to me a few years ago when my wife and I were in Israel. It feels that indeed it did come to me. I had searched for one through many decades since first seeing such a knife for cutting the Sabbath bread when I was a young student in Jerusalem just starting out on my journey. At some point I found a contemporary one, made with a plastic handle and a blade of stainless steel. It did not have a story and never moved me, eventually disappearing during one move or another. During that more recent visit to Israel I made it a point to go into every little store where I might find antique Judaica. I asked many store keepers if they had one, if they had ever seen one. Here and there, one would nod, “no,” they did not have one but had seen one once. Sometimes a friendly storekeeper would direct me to another store, and perhaps from there I would be directed to another. Whether offered a friendly and sympathetic smile or a brusque and dismissive wave of the hand, as though such a thing did not exist, the end result was the same, no folding challah knife.

On our last Friday in Jerusalem during that visit, as we made our way home late in the day to get ready for Shabbos, we went into one more store. It was the week of the Torah portion called Pinchas (Numbers 25:10-30:1). The store was next to the car rental office from which we would leave for the north on Sunday. As I asked my question, the storekeeper pointed to a display case in which there were two folding challah knives. One had a pearl handle and the word “Marienbad” engraved on a section of metal between two sections of pearl. This begins to explain one of the reasons for a folding challah knife. Jewish tourists would take one with them when traveling, easier to carry than a larger challah knife. Marienbad was a tourist destination that was popular with Jews. The other knife is the one that eventually became mine. We held our breath as we asked the cost, releasing our breath with sorrow, knowing it was too expensive. When we came to pick up the rental car on Sunday morning, my wife said she was going to go back into the antique store. Time passed as I waited in the car. When I saw her in the rear view mirror, I realized that she had a small paper bag in her hand. It was the knife, an agreement having been made. I wanted to believe that the meaning I attached to the knife had touched the storekeeper, as I hoped it would now touch others through my sharing. 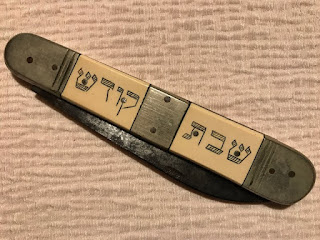 The handle of my small folding challah knife is of old ivory, somewhat yellowed with age. Not quite six inches in length when folded, the knife was probably made in the late nineteenth to early twentieth century. There is no place name engraved in the center of the handle. Rather, on both sides of the center plate, there is a word. Beautifully etched in black ink, as though by a fine scribal hand, are the words, Shabbos Kodesh/the Holy Sabbath. The blade, which opens in the way of a jackknife, is dark and stained. I imagine the many hands that have opened it over the years of its life, imagining what it would say if it could speak and tell its story. The fact that it does not have a place name engraved on it, suggests the other reason for such a challah knife, the reason that inspired my search over so many years. 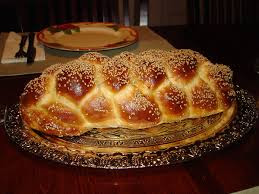 There is a custom that I follow with care, to remove knives from the table before singing Birkat Ha’Mazon, the series of blessings that are said following a meal in which bread has been eaten. A folding knife does not need to be removed, the blade remaining hidden throughout the meal, opened only as needed for cutting bread. The removal of knives is based on the commandment in the Torah portion called Yitro, Exodus 20:22, concerning the building of an altar. There we are told that an altar must be built only of un-hewn stones, so that no steel tool shall come upon them. Later in the Torah (Deut. 27:6), such uncut stones are called avanim sh’laymot/whole stones or, quite literally, peaceful stones. The word for steel tool is charb’cha/your sword; ki charb’cha haynafta aleyha va’t’cha’l’leha/for if you have wielded your sword over one (of the stones), you will have desecrated it. In a beautiful midrash, the rabbis teach that the altar is made to prolong the years of a person and iron is made to shorten the years of a person. It is not right for that which shortens life to be lifted up against that which prolongs life…. How much the more then should one who establishes peace between one person and another, between spouse and spouse, between city and city, between nation and nation, between family and family, between government and government, be protected so that no harm should come upon them.” The human being is the ultimate altar, every person a potential peacemaker against whom the sword should not be raised.

Crying for peace in the midst of war, far more than swords unsheathed now, I found the small folding challah knife in the week of Torah portion Pinchas, the week in which the Gaza war of 2014 had begun. As we drove north, we passed many columns of armored vehicles making their way south. My small knife, carefully carried now in my pack, became a prayerful symbol for me. As it came to me in a context of violence, so its connection to Pinchas, a portion whose name tells of a violent zealot who took the law into his own hands in the face of Israel’s seduction into Midianite idolatry. From out of that context, as is often the case, the rabbis weave a teaching of nonviolence, drawing from within the text itself a challenge to the violence on the surface. At the end of the previous Torah reading, called Balak, we are told that Pinchas rose up/va’yakam and took/va’yikach a spear, the spear with which he then killed two people, Zimri, an Israelite prince, and Cozbi, a Midianite princess.

Beyond the context of the killing and the moral challenges with which the rabbis wrestle and which torment us, the rabbis offer a remarkable teaching that becomes codified into Jewish law. It is assumed that as part of a meeting of elders Pinchas was in the Beit Midrash/House of Study. Because he had to get up and go to get his spear it is deduced that he did not have it with him. From that, a commandment evolves that one is forbidden to bring a weapon into a synagogue or house of study. In a beautifully sensitive commentary that draws on the ancient teaching concerning steel upon the altar, the Mishna B’rurah, an early twentieth century legal work by the Chofetz Chaim, Rabbi Yisrael Meir Kagan, teaches, the synagogue, which is uniquely intended for prayer, increases the days of a person, while a knife shortens the days of a person/l’fi she’beyt ha’k’nesset she’hu m’yuchad la’t’fillah ma’arechet yamav shel adam v’ha’sakin m’katzer y’mei adam. In an earthy legal discussion of practical import, the question is asked about students who spend all of their time in the Beit Midrash, what should they do if they need a knife to cut their food? The answer is that they may use a knife so that they do not have to leave their studies for too long, but they should cover the blade when it is not in use and when they say the blessings after the meal. In approaching Shabbos each week, I think of this teaching and of how a small folding challah knife represents the ultimate removal of the sword. On this Shabbos of Parashat Pinchas, named for a man of violence whose blade cut down human altars, I draw hope from the rabbis’ way of teaching nonviolence in the midst of violence. It is a way of transformation that calls for us to do the same, challenging and transforming violence in text and in life. As the altar of un-hewn stones was meant to bring people together for the sharing of a sacred meal, so for us the Shabbos table, the sword not to be raised upon it, even blades for cutting bread to be covered in order to remind. Toward the day that is all Shabbos, of lessons learned in simple ways, swords turned to plowshares and spears to pruning hooks, that is my prayer and the prayer of a small folding challah knife.