There's a new apocalyptic article on climate change that deserves a reading by all those concerned about the future. Written by David Wallace-Wells, it's called "The Uninhabitable Earth" and first published in New York Magazine. You don't have to believe it all but I wish you would read it all. it's important we consider the way different elements of life on this planet interact with each other in a warming world. 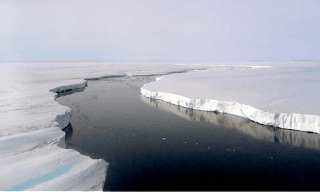 Whereas most articles focus on one dimension of the problem, Wallace-Wells explores them all. So we read about the continuing rise of sea levels with the melting of ice in the arctic. Some consciousness of how Miami and Bangladesh may disappear in the next 50 to 80 years begins to register. We can't ignore the residents of those small island nations already forced to relocate because of encroaching oceans and we can't hide our heads in the sand but must think about the melting permafrost and huge potential methane releases. And as I read the article, I was aware an enormous iceberg has just broken off the Larsen ice shelf in Antarctica, a trillion ton, 2,400 square mile block of ice.

The article raises anew the threat of food scarcity. We're reminded that 20 million will likely die in Africa this year because of the severity of drought and famine in several countries. This, as I read in the local paper, that the forecast for crops in drought stricken South Dakota is down this year; winter wheat down 56%; spring wheat down 32%; oats down 30%. Warming the earth means declining productivity and nothing grows without adequate water.

There is a recognition in the article of how the oceans are being impacted. We're not just talking about ocean acidification, as if that weren't enough. Dead zones are becoming more common, like off the coast of Namibia and the western coasts of North and South America.  We're also watching as the coral reefs bleach and die. The makers of the film "Chasing Ice" have just released a new film, "Chasing Coral." Both films deserve the widest possible distribution as they give us the visual evidence of what we've been hearing. 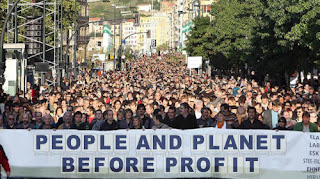 I can't do the article justice in a column. You have to read it for yourself. The important thing is the author is taking a far more holistic approach to the subject. You begin to recognize how the Creation works together for good or for ill. But it's all related. As we say in my church, there's an "Integrity to Creation." And if you mess with one part of it there are effects all over the place.

My own denomination, the United Church of Christ, voted at the recent General Synod a resolution on climate change. As a church, we have always believed in the goodness of God's Creation and our call to be good stewards of it. The recent resolution calls on all of our members to recognize the urgency of healing the climate of the earth, and invites all to exercise moral leadership in that healing, both in private life and in the public square.

In our understanding, we don't gain salvation by believing. And we don't get there alone. Christian faith is about proclaiming and manifesting God's realm right here on earth, right where we are. And that includes treating our home with the honor and respect God's good Creation deserves. 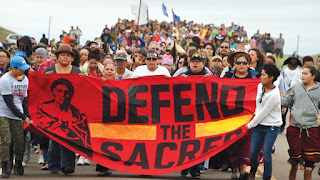 Indigenous people have been trying to tell us for ages that we're connected. You can't kill all the buffalo without changing the nature of the plains. You can't dam up the rivers and expect the salmon to spawn. You can't pump toxic wastes into the earth without poisoning underground water supplies. You can't put carcinogens in the environment and expect humans and animals to be cancer free. You can't continue to burn fossil fuels and expect the global temperature to remain stable.

And the best of our religious traditions teach us the same lessons. Understand what it means to over-reach and don't do it. Appreciate and give thanks for what you've been given. Keep it simple. Watch the ego. Limit your needs so they don't become greeds. Give more than you take. Care about others, especially those who come after you. Love your neighbor. The earth is the Lords, not ours to wreck!

Carl Kline
Posted by Carl Kline at 9:48 AM