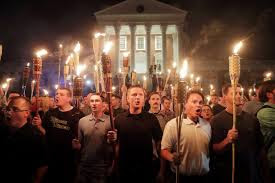 The havoc in Charlottesville, Virginia that resulted in the murder of Heather Heyer, the deaths of two police officers, and the injury of 19 other people has brought us yet again to a time of national soul searching. Some members of Congress have introduced a bill to censure the president who one day strongly denounced the Ku Klux Klan and other white supremacist groups, and the very next day just as clearly endorsed the ideology of these same groups. Mayors in a number of cities have taken bolder action as they have removed statues honoring leaders of the Confederate States of America. Meanwhile, white supremacist groups are planning for more demonstrations and reportedly are recruiting new members and successfully raising funds. The question Dr. Martin Luther King, Jr. asked in 1967 is as timely as ever, “Where Do We Go from Here: Chaos or Community?” (Beacon Press, 1968).
There is growing awareness, if not consensus, that the United States is a race-based nation, and that racism is a white problem. Therefore, the attitudes and actions of white people will, to a large extent, determine how we answer the above question posed by Dr. King. But, as President Barack Obama noted in an acclaimed speech on race which he delivered in 2008, we are “stuck in a racial stalemate.” Obama’s speech was necessitated by a fiery sermon on race delivered by his pastor, the Reverend Jeremiah Wright, which had so enflamed white people that it threatened to derail Obama’s run for the presidency.

Now, nearly a decade later, we  remain stuck in a racial stalemate. Evangelical leaders like Liberty University President Jerry Falwell, Jr., and Pastor Robert Jeffress of First Baptist Dallas have strongly defended the president’s support of white supremacist groups and denounced as “fake news” reports that depict him as a racist. At the same time, Civil Rights champions like the Reverend William Barber II and the Reverend Liz Theoharis are giving leadership to a new “Poor People’s Campaign: A National Call for Moral Revival,” which will coincide with the 50th anniversary of the Poor People’s Campaign led by Dr. King in 1968. Denouncing racist statements from the White House and from evangelical pastors, Barber has declared that the purpose of the 2018 Poor People’s Campaign is 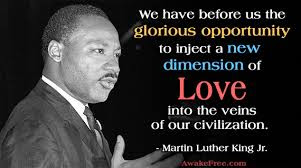 “to build a moral army of love.”The fierce debate on race that is taking place within the Christian community and more broadly across the nation is, I believe, a positive sign for it means that we are moving past our racial stalemate. We have to take sides. But I suggest in the following that the present crisis is about more than taking sides. Speaking as a white Protestant pastor, I contend that it is time for the church to rediscover its authentic witness to the gospel, and “bring good news to the poor” (Luke 4: 18, NRSV). The summons is to come together in “deep solidarity,” to use a phrase coined by religious scholar Joerg Rieger of Vanderbilt University. Deep solidarity depends on finding common ground on which diverse communities may stand without erasing or ignoring differences that have the potential to divide us. 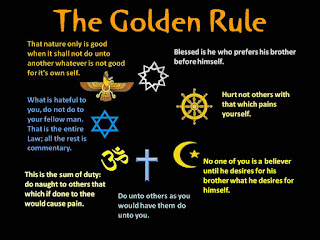 I suggest that the Golden Rule is our moral common ground, “In everything do to others as you would have them do to you” (Mt. 7: 12, NRSV). Religious scholar Karen Armstrong reminds us that the Golden Rule, stated both positively and negatively, is central to all religious life and it is the source of all morality.
Reviving the spirit of the Golden Rule is essential both for the survival of the human project and for our integrity as people of faith. Without such a revival we cannot be true to ourselves or our witness to the Christian gospel. Our faith will become inauthentic. James Baldwin examines the lack of authenticity among people of faith in his classic book, The Fire Next Time (Dell, 1964). Here he writes that white Americans find it difficult “to divest themselves of the notion that they are in possession of something of intrinsic value that black people need and want.” He continues, “A vast amount of energy that goes into what we call the Negro problem is produced by the white man’s profound desire not to be judged by those who are not white . . . . It is for this reason that love is so desperately sought and so cunningly avoided” (127,128). Baldwin alleges that white people do not wish to know the truth about themselves, or take responsibility for their own lives and what goes on in our country. The combination of white power and white denial leaves white people trapped in “burning house” (127) of “moral contradiction” and “spiritual aridity” (130). People of color do not want to be assimilated into this burning house, and white people refuse to leave it. Thus our stalemate. Baldwin calls upon white people to examine and re-examine everything we believe about ourselves and about this country.
Viewed from another perspective, the social model of racism is that of a zero-sum society. More for “them,” (people of color) means less for “us,” (white people). This rigid model devalues cooperation resulting in an uncompromising structure that is violence prone when besieged by real or imaginary threats. White supremacists, in the binary, zero-sum, society, are worried about survival, while multiculturalist live in the illusion that people of color want to be and can be assimilated into a society that has systemically rejected them for 500 years. Both groups operate out of an inauthentic narrative. The former deny white privilege; the latter acknowledge white privilege and affirm the need to treat all people with equal dignity and respect, but often find themselves feeling alienated from white-dominated institutions and networks of power. Both groups feel trapped in a world that is either beyond their control or out of control and, therefore, become ensnared in webs of inauthenticity when what they truly want is to live authentic lives.
The Golden Rule is rooted in a social model that is truer to our actual lived experience than the zero-sum model, and it’s more conducive to a society in which the ethic of deep solidarity can be put into practice. The practical cost of refusing to incorporate this ethic into our daily lives is twofold. First, we will see replications of events in Charlottesville in other communities and an escalation of violence. Second, we will experience a hollowing out of the Christian faith as the fundamental norm of the Golden Rule and the actual social practices of the church grow further and further apart.
The alternative to this vortex of violence is to engage in the difficult and sometimes dangerous but always rewarding work of creating genuine relationships for the sake of building communities in which everyone can flourish and in which Christian communities can give an authentic witness to the faith they profess. What is at stake for the church is whether Christianity becomes an increasingly narrow and privatized personal faith, or a constructive presence that is able to deal with the life and death issues of our time?
Lastly, we, as Christians, must come to a clearer understanding of power in our political economy. Is power best placed in the hands of the elite, or does it need to be built from the bottom up? Answering this question entails examination of existing power structures and networks, identifying winners and losers in today’s political economy, and forging what I call “Golden Rule alliances” of deep solidarity. 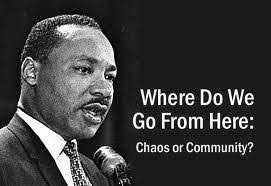 The lesson from Charlottesville is that we cannot remain stuck in a racial stalemate.  As Dr. King wrote in the conclusion of Where Do We Go from Here: Chaos or Community?, “We still have a choice today: nonviolent coexistence or violent coannihilation. This may well be mankind’s [sic] last chance to choose between chaos and community” (191).
Rev. David P. Hansen  PhD