“They Flew Away, that’s what Birds Do”
Rabbi Victor H. Reinstein

I worried about them during the night when I awoke to the sound of a hard rain falling. So too, my first thought upon waking in the morning was also about them. I hurried downstairs to check on them after the rains. In the damp morning air, surrounded by the scent of the rhododendrons, I felt panic when I realized they weren’t there. I looked in the bush among the pink flowers and green leaves. I looked on the branches of the trees that ring the yard. They were not there, not upon the garage roof either. I thought perhaps they had taken shelter in the yellow birdhouse hanging from the eaves of the garage, but no, it was empty. I felt sad and lonely, missing our visitors who had been with us such a short time, hoping that nothing untoward had happened, not wanting to think about it. I thought of the neighbor’s cat that visits the yard, thinking I should have done something more to protect them. I called to Mieke, asking her to come out, to stand with me where we had stood through the week and beheld with awe the simple miracle of love and creation, of perseverance and purpose. “They’re gone,” I said. With warm reassurance, Mieke answered, “they flew away, that’s what birds do.” 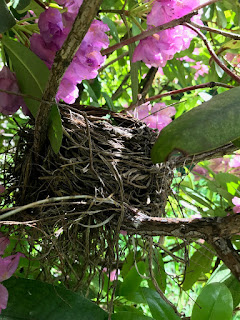 They were a family of robins that had built such a beautiful nest in the rhododendron bush next to the garage. It looked like a perfectly formed bowl, a basket so skillfully woven. We had watched through the week as the mother bird flew out into the yard to forage, returning quickly with food for the young one whose head we could see peeking up from just below the rim of the nest. It is hard to imagine that the little one could mature so quickly to have already been able to fly away. I thought about all the work that had gone into making the nest. There seemed to be lessons to be learned in the willingness of these little creatures to leave it all behind. I thought about the give and take of nest making and of the depth of attachment that most of us have to the things of this world. I wondered if they just assumed that they would make another in whatever place they came to next. Perhaps leaving a nest once built is part of the give and take of being a bird. I wondered if other birds make use of a nest left behind, if a new feathered-family would dwell where others had dwelled before, raising their young where others had nurtured little ones before. I felt grateful for the generosity of our robins, a gift simply to behold the intricate beauty of the nest left behind. 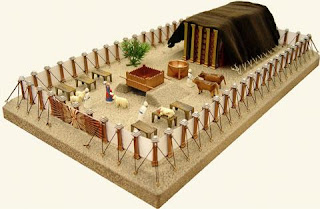 I thought of the Mishkan, the desert sanctuary made to be portable that our ancestors carried with them on the desert journey. Taking in the Torah/Teaching of the birds, I reflected on the difference, one holy dwelling to be left behind when life’s journeys resumed, and another to be taken along until arriving at the next stopping place. The Mishkan is a as a nest as well, a place in which the Sh’chinah as God’s mothering presence might alight, a spirit-nest woven of love, a place in which our souls can rest and be nourished, then to travel on. That’s what people do, they journey on to the next stage in life, taking what we can with us, what we have learned, and, hopefully, leaving behind a trace of beauty simply woven that tells of our having been.

In the Torah portion, Parashat B’ha’alotcha (Numbers 8:1-12:16), we are told of the day on which the Dwelling Place was raised up, all of its parts woven together, a vessel in which spirit might dwell. The raising up of the Mishkan is expressed in the passive, and without a subject, without a name. We are not told that Moses raised up the Dwelling Place, but simply, uv’yom hakim et ha’mishkan/on a day that the Mishkan was raised up. There is no definite article, simply on a day, any day, a day unbound by time. Whenever we create a dwelling place of love and caring, we raise up a Mishkan, a sacred nest, whether it be in a moment of not so random connection, strangers exchanging a smile, a helping hand offered, a song for justice and good offered into the wind and among the people, guests invited to the Sabbath table. Sometimes we take the dwelling with us, and sometimes we leave it behind, the sweet song of little birds to remind, it is okay, whichever way is right in that time and place, and then to another. Transience and uncertainty are part of life, the way of our journeys. Just after the timeless call to raise up the Mishkan, we are told that according to the word of God did the children of Israel journey, and according to the word of God did they camp (Numbers 9:18). It is the uncertainty of life, never knowing, even though we think we do, when change will come, when we journey and when we camp. Nor do we know in the grand weave of life when our very soul will take wing and make its way home, because that’s what souls do.

Would that we could know as the little birds know, “they flew away, that’s what birds do.” As I stood there in the mist of the morning, looking at the empty nest, touched by Mieke’s reassuring wisdom, I thought of an old folk-song that Pete Seeger, of blessed memory, sang, a song called “Little Birdie:”

Little birdie, little birdie,
Come sing to me a song.
I’ve a short while to be here,
And a long time to be gone.

In the time we have, in all the places we go, may we weave a nest of love and let it be our raising up of the Mishkan, a sanctuary for God and people, and until they fly away to take their teaching elsewhere, for all the little birds as well.