I came home tired from church a few weeks ago. I thought I might take a nap. The television was on to the Ariana Grande concert in Manchester, England. This was the second concert, "One Love Manchester," not the first one where so many were killed and injured by the terror attack.

Ariana had decided she had to do something positive to redeem that horrible experience. So she recruited musicians from all over to join her in a return concert that would emphasize love over hate. She wanted to respond to terror with the antidote, fearlessness and love. The artists filed onto the stage one after the other to speak some words  of healing and share some music to soothe or stimulate the soul. Even Justin Bieber did himself proud. 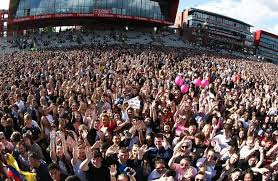 Fifty thousand young people were present. Instead of staying in the safety of their homes, they were concert bound again. Many held signs saying "for our angels," for those who lost their lives in the earlier attack.  They were sending those souls to heaven with music, not revenge. It was obvious these young people would not be cowed by the terror rained on their friends and neighbors just short days earlier. It was a festival of fearlessness. For me, it was church again, writ large.

A couple of days after the concert I was on a plane to Mexico. There I met with some thirty people from all over the country. Two were former gang leaders. Some were academics. A few were students. One was an artist; one a lawyer; one a banker. We ranged in age from 21 to 75. We spent nine days together studying and learning nonviolence as a way of life, courtesy of Mahatma Gandhi, Jesus and so many others. I dare say everyone left convinced we don't have to answer violence with violence. There is another way. But in a world where we are usually given just two choices, fight or flight, the alternatives are usually buried or quickly dismissed.

Take the burial and dismissing of important, positive events in the Islamic world. You won't find reporting of these responses to terror on the front (or last) page of the paper.

On May 27 in Pakistan, Islamic religious scholars issued a unanimous decree that suicide attacks and armed insurgency against a state to impose Islamic rule was forbidden in Islam. The religious edict condemned terrorism and extremism and declared suicide attackers and their supporters as traitors. 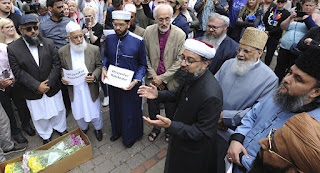 After the killings in Manchester, local Muslim leaders walked to St. Ann's Square, a place of remembrance for those who died and laid flowers at the site. They shared remarks, condemning ISIS as an affront to Islam and humanity. They spoke about how Islam rejects suicide bombings. They thanked those who aided the victims and called for unity and strength in the face of terror. Other religious leadership from Christian and Jewish communities joined them.

After attacks on Coptic Christian churches in Egypt, Muslims started a fund raising campaign to help the victims and their families. One cited the Koran, "Repel evil with that which is better." It's the same thing Martin Luther King said in an essay he wrote on "How a Christian Overcomes Evil." King said you don't push evil out. You crowd it out with something better. 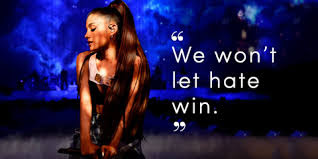 Couldn't we learn from those fifty thousand young people, crowding out fear and filling our lives with music?