I received a simple gift as I prayed the morning prayers. Simple in the way of the old Shaker hymn, “Tis a Gift to be Simple,” needing simplicity within our selves, quiet amidst the clatter and clutter in order to perceive and receive the simple gifts that come to us on wings of serendipity. It is not always, perhaps even only rarely, that response to prayer happens in the very moment of our praying. Perhaps it is simply a matter of our eyes opening and in the prayerful calm of the moment perceiving what we might otherwise have missed. In truth, I didn’t realize at first the beauty of what I had witnessed, nor its meaning. At first, it seemed a distraction, a motion beyond the window of the little prayer room. A small blur of color caught my attention, causing me to look up from words on the page. 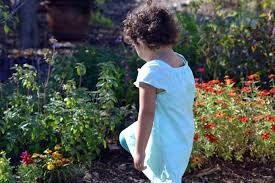 Drawing my talis/prayer shawl around me, I stared out the window, at first seeing a woman with a baby stroller. She was looking away from the stroller toward the front garden, as though waiting, ever so patiently, a smile on her face. Only then did I notice the very little girl at the edge of the garden. She could not have been more than two to three years old. A very little girl with short dark hair, a simple blue dress, a smock it seemed, standing there by herself at the edge of the garden, the woman, I assume her mother, standing respectfully back. It seemed to be a moment of decision for the little one, a little decision that must have seemed so big to her, whether to walk past the great big rock by which she stood and enter the garden and be among the flowers.

I watched the drama play out, a baby step forward, one foot extended and then brought back. And then a determined step, crossing the threshold of the garden, passing the great big rock and entering among the flowers. I moved a bit closer to the window, careful not to be seen or to distract. I could see the smile that formed on the mother’s face, and the smile that became the entire face of the little girl. I could feel the smile upon my own face, a smile-become-prayer, become amen to all the words both said and unsaid. Three smiles offered to God, the smile of a little girl, the smile of two adults unknown to each other, each one smiling as sunshine upon the most beautiful flower in the garden. As mother and daughter continued on their way, I watched for a moment, then returning to my place, what more to say? Looking up, I said “thank you, so beautiful.” As prayer became conversation, as it is meant to be in deepest essence, so I suggested to the Holy One that we might both hold on to that image, that we both might find reason to smile in looking back on that moment amidst all that is not so simple or beautiful in this world. What I really wanted to say then, what tugged at me so deeply, was, “please protect her and all the little ones who are taking their first steps into the world, who are just starting out along the path of life, protect them, please, keep them safe that they might find their way to a flowering garden, a garden of peace that is for us to create.”

I thought of the weekly Torah portion, Parashat Sh’lach L’cha, “Send forth...” (Numbers 13:1-15:41). Moses is told to send forth scouts to scout out the land, one scout from each tribe. A tantalizing phrase, sh’lach l’cha can also mean, “send to yourself….” So the first of the Chassidic writers, disciple of the Holy Ba’al Shem Tov, Rabbi Yaakov Yosef of Polnoy, teaches that the words said to Moses are meant to be for each of us, search out yourself/latur et atzm’cha. It is not about the outer landscape, but about the inner terrain. 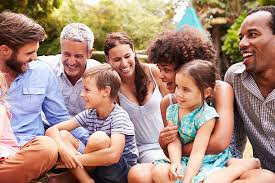 So it was the lesson of a mother and her daughter, the wisdom of patience, a sunshine smile to nurture growth. The garden was outer terrain, but only in finding the courage within could the little girl journey forth into the world, and so for us. As we stand and smile with delight at little ones taking first steps, they are waiting for us, wanting to know that the way ahead is safe and if we will make it so. For children all along the way of growing into who they are, they wait for us to create of this world a garden of peace, as it was at the beginning and is meant to be. Allowing distractions to become prayer, essence revealed, may we have the courage of a little girl to step beyond barriers and enter the garden.