A friend and I were talking the other day about what has become known as "fake news" and "alternative facts." We agreed it was harder than ever to know what to believe. Exaggeration has gone viral. Outright lies have become prolific. The determined attempt to misinform, mislead and distract is ever more present. And even the old stand by of image creation and political spin casts us deeper into doubt and mistrust than ever before. We have to depend on things like "fact checker" to try and ascertain the truth. And for those who really care, you have to spend a lot of time checking sources and determining credibility.

This sense of doubt and mistrust has become so pervasive that it threatens the very foundations of our democracy and perhaps even, of future life on earth.
In one of my religion classes I share a picture of Pope Francis in his tall ceremonial mitre, long a part of papal ceremonial dress. In the story with the picture, Pope Francis is thinking about getting rid of this "pointy hat." He expects to catch hell for it but he would rather try something else, like maybe a baseball cap.    I ask my students if they think this story is true. Knowing something of Pope Francis, some are inclined to think it may be true. There is usually a mixed response. When we examine how they might find out the truth, the key lies in the author, a known satirist, who regularly writes almost
believable, and often hilarious material, about well known public figures. The text is from the Borowitz Report, satirical commentator at the New York Times.

In an age of doubt and mistrust of the hard news, many young people get their news from late night comediennes, if at all. At least you know they are joking.

And with a President who calls the media the "enemy of the American people," and only uses sources that are favorable to his point of view (sometimes mistakenly informing his point of view), trust of the fourth estate in this country has descended to a new low. That's a serious danger to democracy. An educated and trusting citizenry is essential to our country's well being. And if only the comediennes, partisan politicians and their corporate interests are "educating" us, we are in grave danger.

But there's a second danger to democracy that has reared it's ugly head. Doubt has been cast on the security and reliability of the ballot. It started some years ago with partisan activity. You gerrymander a district to your advantage. Or you "clean up" the voting rolls to leave off some people of a certain color in a certain neighborhood. Or you require identification some people won't have. Or you limit the polling places so lines stretch on for blocks and people can't take off the time from work. Or as just happened in Montana, you outlaw voting by mail because the other political party might gain an advantage.

Now there are new threats. Can we trust voting machines won't be hacked? Have they been?

The President sows doubt about the ballot by saying millions voted illegally in the recent election, keeping him from winning the popular vote. And we have the accusation that bus loads of Massachusetts voters invaded New Hampshire to change the electoral outcome in that state. In one interview with N.H. residents making this claim, when they were pressed by the interviewer, they admitted they didn't actually see "buses," but one of them did see several people get out of a car with MA plates.

Should we mention Russia? Perhaps the most serious threat to the ballot in our history as a country and we still don't have the answers. How exactly did a foreign government meddle in the election and was there collusion? The very foundation of democracy is at stake in this question and the investigation seems to be disappearing into the woodwork as threats of war and peace take center stage. 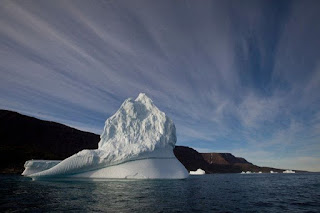 Finally, an even deeper threat to our country as well as the future of our children and grandchildren is the doubt being cast about climate change. For those who are able to see the film "Merchants of Doubt," you know how hard some people work to belittle and disparage scientific evidence. With a party in power that has traditionally denied the scientific evidence of a changing and warming climate, and an administration that is solidly in the hands of the fossil fuel industry, our planetary future is seriously at risk.

As the evidence mounts, day by day by day, of serious challenges to democracy and the planet, one can only hope an energized citizenry will dump doubt, and insist on wiser leaders who talk straight and engender trust, in them and our democratic institutions.

Carl Kline
Posted by Vicky at 9:11 AM