Answering with Our Presence

Presente, Hineni, I am here

It was a raw and rainy day as we gathered in the wind-swept plaza that stretches between Boston City Hall and the JFK Federal Building. Called to be there by the needs of the hour, hundreds of people gathered, drawn there for the sake of three, and many more, the untold and alone. We were there to support Zully, Enrique, and Alex, all undocumented, arrested in the weeks before, seeking “Milk with Dignity” in the Vermont dairy industry, held without bond in a New Hampshire jail. There was something fitting to the harsh weather, a reminder of the struggle itself, so much love needed to punctuate the gray, and so we did. We were the sunshine, warm and bright, basking in each other’s glow, each one’s presence a ray of light to shine upon the way, commitment and hope palpable.

Surrounding an inner circle of huddled masses beneath an overhang of the massive building, a large format photocopy of a petition to release the three we gathered for, rolled out and held up like a Torah scroll, a sacred scroll of names held by loving hands. Among the columns of names unfolding, stronger than the building’s columns of stone, intimations of the weekly Torah portion, God’s voice calling, Vayikra/And God called…, as to each one of us. The desert sanctuary just completed, all its details come together as one. We are the sanctuary, there and then and all across the land, each one counted, each one needed, each one called to say presente, hineni, I am here…. 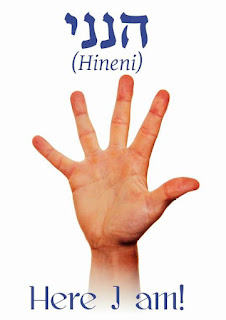 I had the honor to be a speaker, the most important words spoken just before, voice strong and pleading, Lymarie, wife of Alex, “me and my daughter, we need him home.” Her voice made my own tremble as I began to speak. Hers is the timeless voice the Torah heard so long go when it said, you shall not oppress a stranger, you shall not impose restrictions…, for you know the soul of a stranger/v’atem yadatem et nefesh ha’ger, for you were strangers in the land of Egypt (Ex. 22:20, 23:9). It is the voice heard by Caesar Chavez, whose birthday is today as I write. It is his voice, one with his people, his spirit living among us. I held up a copy of a yellowed and tattered leaflet issued by the Massachusetts Board of Rabbis more than forty years ago proclaiming in Yiddish and English non-union grapes and lettuce to be non-kosher, “if it flows from the oppression it is not kosher.” It is the voice heard today by the Mass Board of Rabbis, heeding the call of those who came before, Vayikra. It is the voice heard by the rabbinic human rights organization, T’ruah, organizing for migrant workers and immigrants throughout the land. Created in the image of God, every human being is documented. Bearing the mark of God in all the ways of its human appearance, wherever we travel throughout this world, there is no such thing as an undocumented human being.  Compassion for those who cross our borders does not deny national sovereignty, but acknowledges a greater sovereignty that encompasses all. Knowing no boundaries, God’s compassion needs to infuse immigration policy and the way we speak of other human beings. From the valleys and vineyards of California, to the tomato fields of Florida, to the Green Mountains of Vermont and the pastures below, we call for freedom and hope for all, for Zully, “Kike,” and Alex.

As the throng spread out in one great circle of song, round and round in the rain, an impromptu marching band to lead, I made my way with close family and friends of the three to a small federal courtroom in the building. Along with Rabbi David Lerner, president of the Mass Board of Rabbis, and a minister who had come from Vermont, we were to be clergy witnesses for the bond hearings of our friends, and for the hearings of others whom I tried to hold in my heart as well, that at least in spirit they not be alone. It was surreal in the courtroom, none present of those whose cases were to be heard. In turn, they each appeared by video link from the New Hampshire jail, the screen facing only the judge, a glimpse of loved ones denied to family and friends in court.

We heard the other cases, of human lives announced as numbers, bureaucratic missteps endangering the outcome, the heartbreaking details of a father of four young US citizen children, husband of a legal US resident. The judge scowled at the arrest record, “driving well over the speed limit,” he noted. The lawyer pointed out with all deference that the record actually said the opposite, “driving well under the speed limit.” Amidst the fragile web of details, a glimmer of hope, perhaps, his bond reduced from $5000 to $3500. Another repeatedly answered “no” to whether he had any family ties in the US, no family, no leeway, no reduction of bond, no compassion. Another said he had a brother in the US, their father having been murdered in Guatemala, a carpet layer, arrested in a co-worker’s car; bond reduced from $7500 to $5000, still a small fortune for him. I had to keep remembering that this was just the bond hearing to determine whether each would remain in jail, their ultimate fate held in waiting until the immigration trial yet to come. 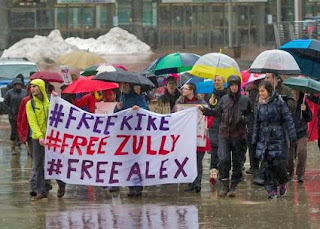 Of our friends, Alex’ hearing was the first of the three, song rising up from the gathering still circling below. To the old labor song, “We Shall Not Be Moved,” words were added, “Free Zully, free Kike, free Alex.” Sitting two rows in front of me, Alex’ wife turned toward the window and smiled at the calling of her husband’s name, stroking her four year old daughter’s hair as the little girl snuggled into her, held between mother and grandmother, trying to make sense of it all. A text message surreptitiously sent, the crowd came alive, aware that Alex’ case had begun. The judge said the sound was distracting, the lawyer smiling in response that they were exercising their first amendment rights. The judge fixed on an earlier arrest for driving under the influence, a case the Vermont courts had dismissed. There was to be no bond and no release for Alex. The court unmoved by the sobbing of wife and mother, by a little girl burying her face into her mother’s lap, by a frail grandmother trying
to hold them all, a recess was called.

As the prosecutor walked past me in that heart-wrenching moment, I wondered how she would be able to sleep that night. I struggled to redirect the anger welling in my heart, to find a place for all the negative feelings, somehow to hold all that swirled. Later, I shared my feelings with the lawyer, and he said with both amazement and respect, “she believes in what she is doing, as do I.”

Each of them so young, all in their early twenties, my struggle continued as Zully’s case was called. The prosecutor urged that no bond be granted, that Zully had left her phone on to record at the time of her arrest, endangering the officers with the possibility of a crowd gathering, pointing then to the window, “like the one here today.” For both Zully and Kike, the lawyer place a large stack of support letters in front of the judge, emphasizing the love and respect for these two in the community. Commenting on the letter from Bernie Sanders, the judge was clearly amazed by the degree of support that surrounded these two, the degree of respect for their efforts to help workers, to improve the lives of others. Noting that he doesn’t usually see such support, the judge referred, without a trace of irony, to the large number of people appearing lately in his immigration court. Zully and Kike’s bond was set at $2500, an amount easily raised. Their release came on the efforts of so many who answered the call, Vayikra, a reminder that each one of us has a role to play and that what we do matters. 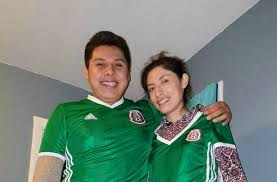 It is all contained in the very first word of the Torah portion, in the word Vayikra itself, always written with a very small letter alef at the end, as in VAYIKRA. Taught positively as a reflection of Moses’ humility, it is also taken as a teaching not to diminish our own importance in the struggle for justice, in the collective effort to create a better world. For all his greatness, for all the praise for his humility, the rabbis imagine God becoming exasperated with Moses for stepping to the side, for not acting in the urgency of the moment. Through the lens of midrash, when God calls to Moses now, Vayikra, that exasperation shows, if you do not redeem them, no one else will redeem them. As Moses becomes each of us, God then says, how long will you diminish your self? The hour is waiting but for you/ayn ha’sha’ah m’tzapah elah lach (Vayikra Rabbah, 1:5). In the layers of Hebrew nuance, the call is clear, the times need you; the needs of the hour depend on you.

The needs of the hour depend on each of us. Circling round in the cold and rain, we are warmed in each other’s presence. The bond hearings for Alex, Zully, and Enrique were only the first step, as they are for so many, most all alone and without support. The greater challenge, even as Alex remains in jail, away from his wife and daughter, will be the immigration hearings yet to come. Each of us is needed, becoming all together the sunshine of justice breaking through the leaden skies. Hearing God’s call, Vayikra, we answer with our presence, presente, hineni, I am here.

Rabbi Victor Hillel Reinstein
Posted by Carl Kline at 9:32 AM