"Better late than never" is hardly ever an apt description of reality. Instead, it seems to me a rather trite and tired phrase people use to try and make you feel better. I've heard the phrase too often. And I was reminded recently of how "too late" I was with one situation in graduate school. 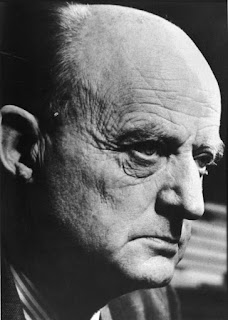 I'd gone to Union Theological Seminary in New York City in the fall of 1963. The country was entering a time of social and political revolution. There was no one more capable of helping entering students like myself understand the philosophical and moral issues of the day than theologian Reinhold Niebuhr, author of "Moral Man and Immoral Society." But just as I arrived, he retired, conducting only one seminar class for graduate students in his apartment. In my three years in Seminary, I never saw him. I was simply "too late."

A documentary film on Niebuhr has just been released and is traveling the country. The trailer for the film emphasizes the influence he had on several Presidents and others like Martin Luther King, Jr. Even though I never met him, his books have given me a point of view that has survived to this day. It's a point of view that helps me understand better the seeming inability of governments to chart a path to peace, even when that road is paved with gold.

One of the primary contributions he made to my thinking is how moral action becomes more difficult as numbers increase. So perhaps an individual can make a moral choice that satisfies. And it will be easier for a city or state than for a nation. But because of the complexity that comes with larger and larger groups of people, moral choice fades as sin and self interest rises.

There is some consolation in Niebuhrs' Serenity Prayer, "God grant me the serenity to accept the things I cannot change, the courage to change the things I can, and the wisdom to know the difference." Still, I'm unable to understand and accept the suicidal inclinations of supposedly rational governments.

With Jesus and Gandhi as our teachers and models, we have a perfectly rational and credible path to peace, where human beings can be as quick to care and forgive as to threaten and kill. Haven't we already seen the fruit of building larger and more sophisticated weapons of war? Must we add another $54 billion of weaponry when we already spend more than the next seven nations combined? Weren't Hiroshima and Nagasaki enough to say "never again?" Weren't Wounded Knee and Sharpeville, Dachau and Buchenwald, enough to keep us from demonizing others? Must we continue to witness mass slaughter and all the additional flags flying in our cemeteries?

One of the reasons we trust force over love is because we haven't learned the alternative. We don't study and take to heart the way of Jesus. We know nothing about a comprehensive strategy for social change promoted by Gandhi, that begins with prayer and ends with self purification and self sacrifice. We say everyone can't be a saint but promote everyone being a warrior. We tend to equate compassion with passivity rather than with passion. We teach our young to compete and our males machismo and relinquish instruction in how to be tough minded but tender hearted. We promote religious and political fanaticism.

As Niebuhr says, "The tendency to claim God as an ally for our partisan value and ends is the source of all religious fanaticism."

And perhaps the most prophetic statement of Niebuhr for our country, enamored by a sense of entitlement and American exceptionalism, "One of the most pathetic aspects of human history is that every civilization expresses itself most pretentiously, compounds its partial and universal values most convincingly, and claims immortality for its finite existence at the very moment when the decay which leads to death has already begun."

For many years a group of us took conflict resolution, violence prevention, bias awareness and peer mediation programs into public schools in the northern plains. Feedback was generally positive. Teachers had calmer classrooms. Principals had fewer students in their office. Even first and second graders learned to mediate conflicts between their peers. 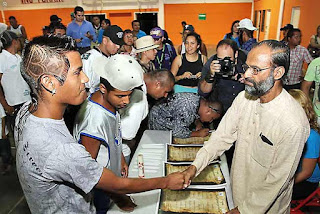 I was reminded today of the work friends are doing in India to mediate serious conflicts and train young people in the ways of nonviolence. A good friend in Mexico leaves next week for a remote village in Chiapas to do a training program in nonviolence as a colleague of his in Monterrey continues to bring rival gangs together to sign peace treaties. Brookings is home to the Satyagraha Institute that organizes education and training programs in solving conflicts without resort to force and coercion. Training will take place in three countries in 2017, including Nigeria, desperate for an alternative to violence.

As the world seems determined to prove Niebuhr right; as governments find it difficult if not impossible to make moral choices; individuals, you and I, can still choose. "Ultimately evil is done not so much by evil people, but by good people who do not know themselves and who do not probe deeply."

We can probe deeply. And if we probe deeply enough, especially in the likes of Jesus and Gandhi, perhaps we can at least be saved by hope. Our choice for hope would be better late than never.