I've been reading a small book called "An Altar in the World." It's written by Barbara Brown Taylor, an adjunct faculty at Columbia Theological Seminary in Decatur, Georgia and a professor at Piedmont College. I'm told she lives on a farm with lots of animals in the yard.

We know what is happening to the earth as altars are confined to sanctuaries. The riverbanks are drying up or overflowing. The mountaintops are loosing their glaciers. The deserts are expanding. And the trees are being logged. Perhaps with Barbara, we need to be more aware of the altars in the world.

Last August, with a group of people in the Black Hills, one of our members told us we needed to stay up for a meteor shower. It was August 10. Every year, that is the night of the Perseid meteor shower. For some Catholics, this is known as the "tears of Saint Lawrence." Lawrence was a Christian martyr, burnt alive, and the canonical date of his martyrdom is August 10, 258 AD.

Most of us were too tired to stay up watching on a mostly cloudy night. But Barbara Brown Taylor remembers a night when she was seven, when her father came into her room, woke her sister and her up and said, "come on, you have to see this." They took a blanket, laid on a wooden balcony off their parents bedroom and watched the tears of St. Lawrence. For a seven year old girl, the experience was an altar in the world.

Several years ago, my wife and I walked the Cape Cod National Seashore with some young friends. We had our bedrolls and the food and water we would need for the trek. We were walking because we wanted to see the beach up close and personal while we still could. We were fearful of the continuing erosion and attempts at making it a private preserve. When you walk slowly, in spaces where there is no other sign of human intervention, a tidal pool, a distant dolphin, a spectacular sunset, even a misty morning rain becomes an altar in the world.

Usually, we are so intent on a destination, our walks, runs, cycles, or drives, take us right by the altars in the world we might otherwise see.

I doubt one of the walks on my bucket list will be completed in this lifetime. The Pilgrimage route "Way of Saint James" holds a special fascination for me after seeing the movie "The Way" with Martin Sheen. Even so, I'm told so much of that path is now a paved road, not a pastoral trail, with hundreds, even thousands of walkers with you on a summer day. I'm fearful any altars would be obscured by pavement and people.

Maybe I'll stick to the labyrinth in the yard of the church. It could be my substitute for walking the Spanish pilgrimage route, just as the first Christian labyrinth substituted for a pilgrimage to Jerusalem. A labyrinth can be a special meditative and prayerful tool. It might even open ones' eyes to the altars in the world. 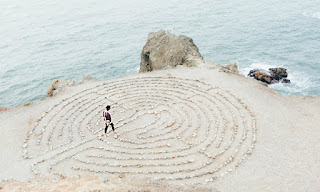 I've walked the labyrinth before, at a retreat center in Pennsylvania and at the Black Hills Pathways Spiritual Sanctuary. Both sites were in a wonderful natural environment. Although altars in the world need not be huge and ornate in majestic surroundings. The holy is there for us to see in the modest and minuscule as well, if only we open our eyes. Think of the child squatting to examine an insect.

I may try and join others on May 6, at 1:00 on International Labyrinth Day, when walkers around the globe will walk the labyrinth together, at 1:00, as one.

It's possible we need wilderness to be truly human. The more we exist in man made environments the more we lose touch with Creation and our relationship to all that is. There's a quality to our experience in the remaining wild places, that haven't ben too badly disturbed and damaged by human activity. These places can touch something deep inside us, a place in our being that forces us to recognize the beyond. It might be the slap of a beaver on a misty pond at 5:00 AM on an Easter morning. Or it might be two golden eagles floating together three feet from your nose as you sit on the face of a cliff. Or it might be an angry deer that warns you that you are not God, just part of the Creators' Creation. Even a creek can teach us, through eddies and music and clarity. 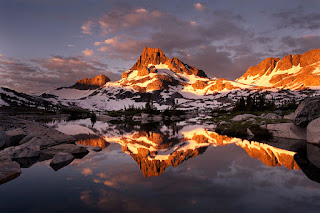 There's a new altar in our living room this morning. The smell has started to permeate the room and leak out into the hallway. That smell has been an altar of the holy for me since childhood. Easter lilies are not just for church, but for homes. And who wouldn't be transported to heaven by a whole field of them.

Carl Kline
Posted by Carl Kline at 9:09 AM