It's Time To Reclaim Our Highest Vision: Let's Embrace The Great Turning

Across the nation, activists, organizers and newly enlivened social change onlookers are hungry for a shared, coherent sense of direction. George Lakey's recent 10-point strategy for nonviolent resistance to the new Trump administration offers an excellent beginning to an absolutely critical conversation about comprehensive movement strategy.

But our many social change movements, which together have begun to comprise the macro "movement of movements" Lakey describes, may have a short window of time to get our strategic ducks in a row. The new administration has demonstrated a determined will to consolidate power, and to do so quickly. Fascistic executive orders; the systematic de-legitimization of existing institutions, checks and balances; unfettered propaganda; and the normalization of bombastic and hateful rhetoric are stark early-warning signs of totalitarian takeover. In this setting, as Lakey argues, the new administration is relying on social change-makers to stay in their customary mode of "playing defense." We're called to be culture-shifting movement builders, but by setting enough fires in enough places, Trump, Bannon and Co. seek to render us firefighters.
In the face of the new administration's systematic dehumanization, the strength and clarity of purpose needed in order to break free of our defensive posture is going to require us to very thoughtfully and intentionally knit our movements together. This doesn't mean that our emerging movement of movements needs to become a centralized, top-heavy institution. On the contrary, decentralized models of organizing are wholly appropriate right now, and fully in step with the times. But, to move in decentralized concert -- the paradoxical holy grail for movement-makers today -- we need to set our sights on a shared and deeply inspiring beacon. 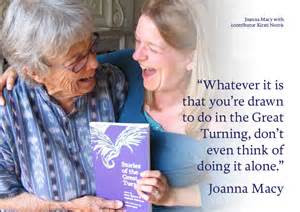 Visionaries Joanna Macy and David Korten have popularized the phrase "the Great Turning" as a way to name our collective and diverse efforts to transition from our exploitative and destructive industrial growth society to a truly just and life-sustaining society, a shift that they and a growing number of change-makers believe represents a new and pivotal epoch in our human evolution.
The Great Turning is all-encompassing, giving answer to the great array of our current social and ecological concerns -- from racial justice to indigenous sovereignty, from economic imperialism to murderous drones, from factory farming to fracking, and far beyond. And, by definition, the Great Turning is inclusive of three mutually supportive modes of action: bold nonviolent resistance to the systems and forces of empire, the constructive building up of the alternative society in which we long to live, and a depth of self-transformation, individual by individual, that will enable a critical mass of us to break free of our personal collaboration and collusion with the status quo of the Domination System (a system of which we are a part, if only unwittingly).
The Great Turning does a magnificent job of meeting our movement of movement's current need for an overarching visional statement, and I encourage us to claim and celebrate it as the spacious, yet exacting umbrella under which our vast constellation of social struggles can now locate themselves.
Some will argue that language such as this, and the high ideal to which it points, is unrealistic, and that the emerging movement of movements should set its sights on lower hanging fruit. This, I argue, would be a potentially fatal mistake. In the face of our existential climate crisis, what has passed as political pragmatism up until now has most definitely become impractical. A great many of our most powerful thought leaders have been going to great lengths to explain this to us in recent years -- perhaps none more persuasively than Michelle Alexander and Naomi Klein. 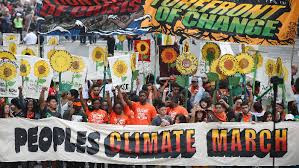 Movement builders of many stripes have begun to discern the sturdy movement footpath that Alexander and Klein have constructed for us. Alexander's The New Jim Crow, released in 2010, did far more than expose the treacheries of the US system of mass incarceration. The book presented a crushing critique of gradualism and of social change advocates' loyalty to it. The gist of Alexander's argument is that piecemeal policy reform is simply not going to cut it in our age of cultural collapse. What's needed, she says, is a shift in public consciousness that will give rise to a massive social movement with the courage and power to fully transform our economic and political systems.
Four years later, in This Changes Everything, Naomi Klein followed and expanded on this thesis in a most powerful and instructive way.
While harmonizing with Alexander's insights about the paralyzing limits of superficial reform, Klein couldn't help but notice, point to and name the elephant standing in the middle of the room: capitalism. Through her monumental and terrifying exploration of the climate crisis, Klein could not escape the conclusion that our society's allegiance and addiction to winner/loser capitalism -- a system that requires by default the two-fold plunder of the earth and poor people -- must be renounced and abandoned, personally and collectively, if we want to see our way to a livable future.
The Great Turning -- the epochal shift from our extraction-based, plunder-ridden industrial-growth society to a truly just and life-sustaining society -- is the natural, inevitable and majestic movement goal to which such prophetic thought leaders are pointing. It's time to rally to this call and to let it serve as the foundation for our emerging strategy for national transformation.

Chris Moore-Backman is author of The Gandhian Iceberg: A Nonviolence Manifesto for the Age of the Great Turning and producer of Bringing Down the New Jim Crow, a radio documentary series examining the movement to end the US system of mass incarceration.
Posted by Vicky at 8:50 AM