Some years ago I worked closely with an international peace organization that has now been in existence for 35 years. We have always been organized into country groups with active support networks in at least a dozen nations. These country groups recruit, train and support volunteers for the projects.
We have supported projects in several countries around the globe where we were invited to offer protection for human rights defenders, who often put their lives on the line defending human rights in dictatorial and repressive regimes. Projects have taken place in El Salvador, Nepal, Indonesia, Colombia, Mexico, N. America, Haiti and Kenya, to name a few.
The first project was in Central America, where mothers of disappeared husbands and sons were politically active. The mothers were seeking knowledge of their loved ones, oftentimes with gatherings in public places with signs and speeches. The mothers were being targeted by repressive forces, in many cases the same ones that had disappeared their family members. Because of their activity, some of the mothers and their remaining family members were receiving death threats. 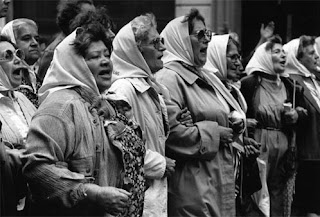 Peace Brigades International (PBI) was asked to send volunteers to accompany the mothers and their families with unarmed peacekeepers, drawn from the different PBI country groups. These volunteers are people trained in nonviolence and the culture and language of the people requesting them. They give six months or longer of their lives in virtual war zones to accompany these brave defenders, who are risking all for basic human rights. The work day of a PBI volunteer might mean observing at a parade. Or it might mean walking a child to school in the morning and sitting outside the school all day, making sure the child is not kidnapped.
Non- partisan in approach and visually identifiable by their clothing, these PBI volunteers speak with all the different parties to each conflict upon arrival. Their mission is to simply accompany human rights defenders. Testimony about the effectiveness of this accompaniment has been consistently positive, with gratitude expressed by human rights defenders in all of the countries where projects have taken place.
PBI is governed by an International Council. Attending one of the annual meetings in Switzerland, I was introduced to how decision making is supposed to work. PBI from the beginning has been committed to consensus decision making. Everyone has to agree before a decision can be implemented. You can abstain, but one person can also block the decision of the whole group.
At this International Council meeting, we were some sixty persons, from all the various countries and projects, using three languages. Some of the decisions to be made had people lined up on opposite sides. Disagreement was heated. Feelings were intense. Individuals were adamant. Consensus seemed impossible, especially in three days. But without decisions the organization would be left it limbo.
Experienced facilitators were appointed. Intense meetings with the most invested persons followed, often late into the night. By the end of the gathering we had made our decisions as an organization by consensus. No one's opinion was ignored. No one abstained or blocked. Everyone prepared to move the organization ahead as one body.
Afterward, I wished our Congress could witness what happened. Democrat and Republican principles are no more polar opposites than opinions in that PBI gathering. Yet, for some reason, our government has descended into a wrestling match with no end in sight. Could it be that the primary commitment in Congress is not to democracy? Could it be that the primary commitment in Congress is to "my way or the highway?" Why can't we seem to elect our representatives based on their willingness to work with others to move us forward together?
Now we are faced in this country with the most politically and racially divided nation we have seen in my lifetime. Even the sixties, an era of the civil rights struggle and an unpopular war in Vietnam, didn't have the explosive potential of our present historical moment. Thousands have been marching for Immigrants, for Muslims, for Refugees, for Black Lives Matter, for Standing Rock and No DAPL. And we will soon see millions of women striking on International Womens Day and perhaps a million more gathering in Washington, D.C. for the climate in April.
In the meantime, we have a President who doesn't seem to understand what all the fuss is about. He thinks he is  just following up on his campaign promises. He seems oblivious to the fact that he was elected by one quarter of the electorate after a divisive, sometimes hateful campaign. He seems puzzled he should have to move the country forward with communication, consultation and some kind of consensus.

In a country this large and diverse, consensus won't always happen. But if our ultimate commitment is to the democratic process, we have to try. Can you hear Senators, Congresswomen? Can you hear SD State Legislature? Can you hear Mr. President? Could you try?