So apparently the U.S. is going to build a $12 to $15 billion dollar wall on the southern border. Our newly elected President insists that it will stem the flow of illegal immigration, keep us safer and be part of the economic plan to make America great again. Along with the executive order to build the wall came further directions to stop any refugees coming into the country from several nations, where we have actively or surreptitiously supported the wars that made them refugees. Oh, and Muslims are not welcome.

Apparently it is a secret in some circles that war creates refugees; that war gives rise to extremism; that arming other nations means they often use those arms against the innocent; that interventionist and economic policies on the part of the U.S. give rise to people fleeing their homelands, like from Honduras, El Salvador, Guatemala and Mexico. And besides, it must be a secret to some that walls don't work! 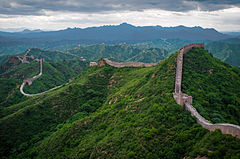 The Great Wall of China is now a UNESCO World Heritage Site. It was built to keep those barbarians from the north at bay. It had its ups and downs over the centuries but eventually, in multiple instances, the unwanted hordes found ways to break or bridge the wall.

On the other hand, the wall has often said more about the rulers of China than the potential invaders. Historically, the wall has come to symbolize the resistance of China to outside influence and the efforts of leaders to control the Chinese people. It's interesting that now, where guards looked out from their towers, tourists scan the horizon in both directions.

Building a wall to keep others out often works against the wall builders and keeps them walled in. There's an interesting example I came across reading about the origins of the Thanksgiving hymn, "Now Thank We All Our God." The hymn was written by Martin Rinkart, a Lutheran pastor in a small village in Saxony during the time of the Thirty Years War. Floods of refugees took shelter within the walled city of Eilenberg where Rinkart lived. The Swedish army laid siege to the city and plague, famine and fear followed. In time, Rinkart was the only pastor left, conducting as many as fifty funerals a day. Eventually, he was the one who left the safety of the city walls to negotiate with the enemy and bring the siege to an end.

But the wall I'm most familiar with, because it's a symbol from my generation, is the Berlin wall. Here we had a wall separating a country, and separating citizens and families from each other. 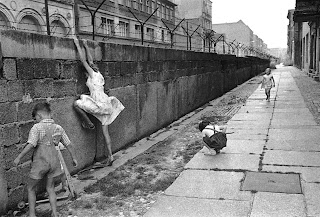 Before the wall was constructed in 1961, over 3 million East Germans ignored emigration restrictions and fled from the Soviet Union to West Germany and then to other Western countries. After the wall was constructed, from 1961 to 1989 when it fell, 139 people were killed or died at the wall. They ranged in age from a 1 year old child to a woman of 80. The wall didn't work. People risked life and limb to be with loved ones and escape oppressive state government and the wall was eventually torn down with great jubilation.

When our oldest grandson was small, he would watch Veggie Tales on our television set. One of the tales we had was about the way the Hebrew people were able to bring down the walls of Jericho. The walls came down because Joshua and the others followed God's instructions to the letter. It took seven days with seven priests with seven trumpets leading the Ark of the Covenant. And on the seventh day they circled the walls seven times and the whole people gave a great shout … and the walls came down.

Each time our grandson watched that video, I always had to reverse the tape several times so he could examine that sequence and the falling walls. It was as if he was memorizing the process, fascinated by the magic of it. The walls of Jericho failed in the face of God's covenantal people. 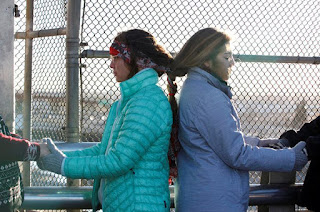 I read a wonderful story the other day about 50 women who met on the bridge connecting Mexico and the U.S. They were from both countries and as a symbol of their relationship and connection with each other they braided their hair together or tied their scarves together. Maybe if we provided our U.S. young with goals and life meaning beyond money and drugs, the demand for drugs crossing any border would disappear. And if we treated countries like Mexico with respect, instead of exploiting them with extractive industries that pillage the land and endanger their water; and if we had physically willing and able workers to tend our fields and farms and factories, roof our homes and landscape our lawns, there would be little work and incentive for the "undocumented."

Maybe with the life affirming wisdom of the women on the bridge and the courage of people of faith called to follow the commandments of God, not governments, we will find a way to break down the walls that some would use to further divide us from our neighbors.